Someone Called 911 to Report Man With Bassoon, Mistaking the Instrument for a Weapon

Someone Called 911 to Report Man With Bassoon, Mistaking the Instrument for a Weapon 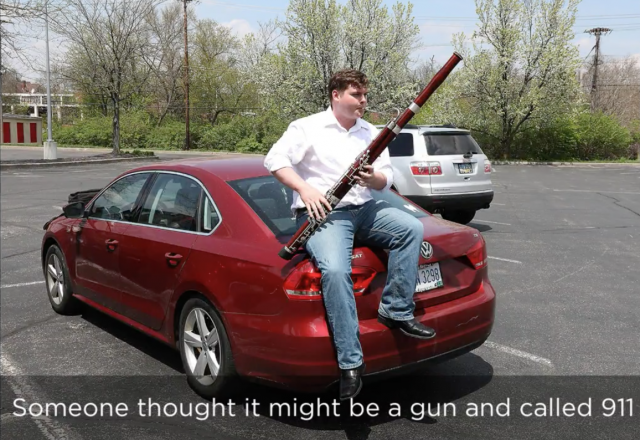 Eric Barga arrived at Covenant Presbyterian Church about a half hour early for bell choir practice. April 5 was “one of the first nice days,” Barga remembers, so he sat on the trunk of his car and began killing time by playing scales.

Less than ten minutes later, two law enforcement units rolled up, having received a report of a man with a long rifle.

“I didn’t really feel threatened,” said Barga. “I don’t get nervous. Years of music school (performance) beats that out of you.”

The Springfield News-Sun has the full story:

Dispatched at a few seconds before 6:09 p.m., two units arrived on the scene just before 6:12 p.m., one with Officers Tim Melvin and Sgt. Bill Sanders, a second with shift supervisor, Sgt. Bill Evans.

“They didn’t immediately approach me,” Barga said. “I saw a police car, it’s a big police van, roll up really slowly” in a parking lot between the west side of the church and the east side of a former fitness center and previous Habitat for Humanity ReStore. “I wasn’t concerned that I was doing anything wrong.”

But moments later, as that van pulled into the covenant lot from in front of him, another unit he hadn’t noticed pulled up behind him.

Graf said that while the word tactics can seem like a “hardcore” term, it involves a common-sense and thoughtful way police use to approach a potentially dangerous situation. In the many years he spent on street patrol in Springfield before becoming chief, a simple tactic he used on a burglary call was to stop his patrol car a few houses down from where the crime was supposed to have been taking place so he could approach the house at an angle rather than straight on.

As they approached Barga, the officers were using such a tactical approach, and, though the intent may not have been hard core, Barga remembers the feeling of the moment.

“At this point, I realize they’re confronting me,” he said. “I put on a little dopey smile and said, ‘Did somebody call the cops on me?’”

Although he felt slightly tense, “I didn’t really feel threatened,” he said, adding, “I don’t get nervous. Years of music school (performance) beats that out of you.”

He nonetheless did notice that all three officers were wearing protective vests, which, as it turns out, is standard procedure, although not what people who experience it for the first time consider a standard experience. He also recalls that while two left their car, another stayed in his.

Barga had no idea why the police were there. Searching his mind, he wondered if he had somehow violated a noise ordinance. The notion that someone might have mistaken his bassoon for a rifle “never crossed my mind.”

The officers “were all giggling” by the time they came to a stop, Barga said. One even asked him the classic question: “Is that a bassoon or an oboe?”

Graf said that although it may have been apparent from across the parking lot that Barga had a musical instrument, “You’re still going to talk to the person to make sure everything’s OK. You want to follow through on the calls,” in part because the 911 caller may be viewing the scene and otherwise conclude the officers didn’t properly respond.

Less than four minutes after their arrival, the officers were gone.

No one was hurt, everyone had a good laugh, and Barga once again, explained that his instrument was a bassoon, not an oboe.

There are plenty of things you could say about this story — the media’s hyperventilating and fear-mongering over guns has made some irrationally afraid, guns clearly don’t make woodwind sounds, or even that people need to mind their own damn business and leave church bassoonists to practice their scales under orange skies in peace.

But really, this is yet another indictment on our sad excuse for an education system. What the hell are people learning these days if a bassoon is so easily confused with a long rifle?

Is it a law violation to carry a long gun in public in Ohio?

First officers on the scene should have called off the rest and never approached him.

Perhaps it was an assault bassoon…

More seriously, this is just another example of the hysteria gripping a substantial part of our country. It would seriously help if people could act like responsible adults.

An instrument capable of multiple notes….

….however, it’s just semi-automatic since only one note can be played with each breath.

I think that’s at least partially deliberate. It’s a lot easier to seize more power (like banning guns) when the populace is both ignorant and panicked.

Usually, it’s not the instrument that’s dangerous…it’s the player!!!

“I put on a little dopey smile and said, ‘Did somebody call the cops on me?’”

Ugh. There are other variants of this story where unprofessional police officers pull and shoot you dead because you reached behind your back to scratch your butt.

Civillians have little awareness of how lethal these situations are. In Somalia we had a US reporter at a road block throwing a “do you know who I am” tantrum because we confiscated his personal firearm. I remember thinking “That’s cute, but you just put our 2 overwatch snipers into Condition 1, idiot.”

You should never treat encounters with armed police as a casual event. Their ROEs are less stringent than ours were in Mogadishu.

Wasn’t your ROE in Mogadishu, “If they aren’t a skinny, don’t shoot ’em”?

Regarding your ROEs in what was a war zone – I noticed some time ago that ROEs for American forces in war zones are more stringent than the ROEs of police officers in our own streets. Does anyone else see a problem with that?

The purpose of the military is to kill people and break things. The purpose of our police is to protect the lives of everyone of the citizens they serve. How did the situation get inverted and why did we let it happen?

Police are required to go into situations and do what’s needed to stop the situation at hand. Military generally have to protect an area or go out hunting with politics tying their hands behind their backs. A Police ROE isn’t really that different from an average person’s for purposes of actually being able to legally shoot someone. Spend some time with Andrew Branca’s web site of Law Of Self Defense and you’ll get some idea of that cops and the average citizen can and cannot do.

I suggest that YOU indeed spend some time on Branca’s site LOSD. You will find that the ROE for private citizens and LE are quite different.

Where did you get this idea?

In our current war zones, most Army and marine units are armed with fully automatic weapons and wearing class III or better body armor and travel in armed convoys of armored vehicles mounting M2 machine guns, M19 grenade launchers or 20mm cannons and have access to heavily armed aerial assets. Police are armed with pistols and, occasionally, with semi-automatic rifles or shotguns and wearing class IIA body armor and travel around in single unarmored midsize sedans, with usually one or two officers, and nave no access to armed aerial assets. And, in the last few years, our police have come under attack more frequently than our military ground forces while on patrol.

Learning to play a bassoon is on my bucket list of instruments. They are quite costly so I’ll probably get a bass clarinet before a bassoon.

So many instruments, so little time. From what I have gleaned, the oboe is just too difficult to develop a casual interest.

Haha, whoever thought that a bassoon looked like a firearm was probably a journalist or school teacher in another life.

The hardest thing about the bassoon and the oboe is blowing through the double reed!

The double reed idea reminds me of how developing an embouchure for brass instruments works. I’ve worked through clarinets, saxophones, flute–but not so good on the flute. The trumpet actually came along more easily than my sax.

Geez, I don’t know if any of those instrument rental places will lease a bassoon to a 66 year old, or not. A year would be enough to learn some scales and develop some tone quality.

I love the Bach Cello Suites when transcribed for bass clarinet.

Ah heck, I took up the cello around age 35 and had some fun with it. Same with the viola but I didn’t start that until about 64. The viola is actually kind of easy in the first two positions.

Dang it! If only I could sing. Thanks to the Lord, he has provided that ability to a lot of people, we take our blessings as we find them 🙂

One even asked him the classic question: “Is that a bassoon or an oboe?”

The cops were obviously trying to goad him into taking the first shot.

we all should take NOTE of that.

My brother played an Oboe, we shared a room I listened to years of practice. Almost as bad as when he learned the clarinet. If I were the officer I would have considered firing in self defense.

The daughters of a friend of mine were once aspiring musicians (and became quite accomplished). After having to listen to them practice their clarinets, my friend developed an aversion to the sound of the instrument.

We were riding in my car one day and music from my iPod came on – it featured the clarinet. She said, “That doesn’t sound bad.” I said, “Doesn’t sound bad? That is Benny Goodman!”

Is that a bassoon in your pocket or are you just happy to see me?

File a grievance! Clearly this is a case of Orchestral discrimination. Get a good lawyer, like that whore monger that has all the interviews!

That “someone” who called 911 needs to have the dumb-shit slapped out of them.

With a bassoon present, obviously the Wolf would be around any moment

Congratulations on the Prokofiev connection – but the bassoon was the grandfather….

An oboe might be mistaken for an instrument of torture.

Depends who plays it!

Clearly, the person who called 911 isn’t familiar with either firearms or musical instruments.

Did the Police have their guns drawn? I imagine if they are expecting a dangerous person armed with a military weapon they would be on a hair trigger alert. Also if the Police were coming from behind him, it is pretty hard to determine what he is holding from behind him and a car. It’s very fortunate he wasn’t shot.

When one is sufficiently “woke” one will see what they told you to see.

Perhaps the caller is racist,because the bassoon pictured is black and because GUNS.

In fact, the original military bazooka was named for a musical instrument:
“The universally-applied nickname arose from the M1 variant’s vague resemblance to the musical instrument called a ‘bazooka’ invented and popularized by 1930s U.S. comedian Bob Burns.”

Some people in American society are clearly ‘stuck on stupid’ and desperately need their medications tweeked….right after they gather up all news ‘readers’ on cable and TV networks and put them up against a nice wall to take a long ‘time out’.

Don’t laugh, but bassoon cases are really useful for carrying the bazooka back and forth to the range. 😉 A buddy does use one of those big hard golfbag cases for his M2HB.

Was that a full semi automatic bassoon?