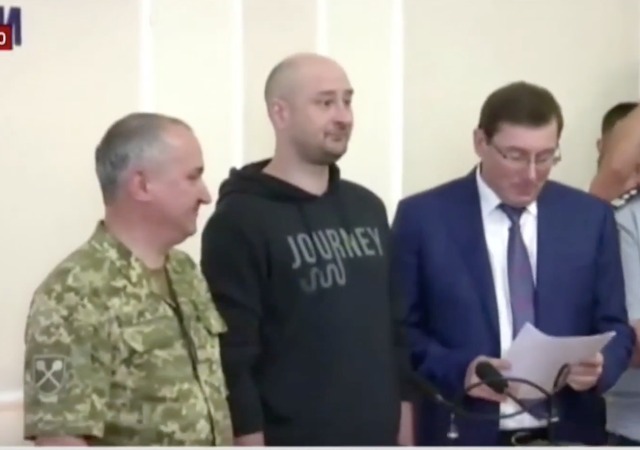 WHOA! On Tuesday, just yesterday, we all mourned Russian journalist and Kremlin Arkady Babchenko after his wife found him shot outside of their apartment in Kyiv, Ukraine, and he died on the way to the hospital.

Today, Babchenko turned up at a news conference…ALIVE AND WELL. He faked his death so the authorities could catch those people who put a price on his head.

What a freaking brilliant move. We all know Russia has no problem taking out their critics, even on international grounds.

Babchenko was no exception. He left Russia in 2017 after he received “death threats over a post on social media.”

At a news conference, where people thought Ukrainian officials would tell them how they solved Babchenko’s murder, brought him out instead.

Ukraine’s Security Service said its officials “had received prior warning about the attempted murder of Babchenko and decided to conduct an operation to collect evidence of terrorist activity by the Russian special services on Ukrainian territory.”

This Ukrainian gave the job to “an acquaintance who had fought in the separatist war in eastern Ukraine as the gunman.” The Ukrainian services then “recruited the hired ‘killer’ as a double agent and stage the murder in order to arrest the organizer.”

Babchenko appeared on the live television briefing after Hrytsak’s announcement, saying the fictitious reports of his death were part of an SBU operation that had been prepared for two months.

“As far as I know, this operation was prepared for two months. A result of that was this special operation,” Babchenko told the briefing. “They saved my life. I want to say thanks. Larger terrorist attacks were prevented.”

Babchenko said he had no choice but to take part in the operation.

“I did my job. I’m still alive,” Babchenko said.

Babchenko didn’t even tell his wife about the plot. “Special apologies to my wife,” he said at the conference.

Ukrainian security services also detained the Ukrainian who organized the hit on Babchenko. Officials said the man “was going to organize killings of 30 Russian citizens in Ukraine on Russian special services’ order, with Babchenko being the first one.”

LOL, damn it’s like a TV show or a spy novel.

$5 says there’s a cable channel or three already trying to get this guy on the phone to talk about his new reality show if he wants one.

As the famous American philosopher Wednesday Addams would say: “….wait.”

Ummmm…isn’t it a little self-defeating to come out as alive after a fake assassination when it is supposed to be an entire Country out to snuff you out?

I mean, it isn’t like it was the local little league parents wanting to knock-off an umpire…it’s a whole friggin’ Country with a long historical record of offing it’s citizens it doesn’t like. One would think they likely have a whole Bureau setup for such things.

Yet Doofusy McDoofus Face parades-out with a toothy “Suprise! Missed Me Bitches!”? Methinks he is not long for this world IF the accusation is true…and if his butt isn’t DRT within 6-months, it isn’t true.

DRT never fails to bring a smile. I first heard it from an EMT years ago. Working in an OR and mountain climbing has made me more mordid than my years would suggest. Just had to explain that the belay device called an ATC really does mean air traffic control, which comes in handy for those hopefully short impromptu flights that don’t result in a crater.

Just sent this to my vertigo challenged buddy.

Kiev is an anti-Russian, anti-native, pro-EEC stronghold. He may still be aborted in a robbery or some other staged distraction.

This should trigger diplomatic and economic retaliation against Russia by every non-Russian country on Earth.

In the real world, though, there’s a serious question of whether there will be any reaction at all.

One, I expect that they must have hard evidence against the Russian security services to make such claims? Or at least I would hope? Two, aren’t quite a few nations conducting economic retaliation against Russia for other stuff this very moment, not least of which is the United States? We’re not starting from zero.

Well. The evil unnamed “Russian security services” were responsible for this alleged plot to kill this journalist in the Ukraine. However, we have no identified members of the evil “Russian security services” named as being responsible. Hum. I hate to say this, but if the Russian government really wants this guy dead, he is dead, now that they know he is still alive. So, what exactly did he gain by coming back to life?

As for why this guy decided not to stay dead, I have three thoughts:

1) This was a Ukrainian intelligence operation. That being the case, there’s no telling what isn’t being reported, nor how any hidden info may have affected the guy’s decision to reveal he’s alive.

B) Upon hearing the faked report that this guy had been assassinated, the first thing the Russians would have noticed is that none of their people called in to report ‘mission accomplished’. The first thing the Russians would do is confirm his death, which in short order will have revealed he was still alive. His ‘death’ would not have long survived Russia’s field intelligence scrutiny. Hours, days at most.

3) Imagine the difficulty of faking one’s death to thwart Russian assassins, then spending the rest of your life hiding out from them. I can easily see a guy deciding that, nope, I’ll die in some God-forsaken outland under a fake name and nobody will know, so…. f**k it, I’ll take my chances.

4) This was never an operation of an “Russian Security Service” and the Ukrainians decided to portray it as one.

This is being run as a simple murder-for-hire criminal investigation. We see them all the time. Usually it entails an arrest based upon testimony from an informant or an undercover police officer. Almost never do we see these things involve a well publicized “death” before the arrest. If it was being run as a counter intelligence operation, it would have been run dark. The Broker would have been surveilled or picked up and interrogated and the information obtained would have been quietly followed up. As it is, at this point, all you have is drama and little or no substance to support any foreign state participation. And, you have just tipped off the alleged state actor that they are suspect. Not to smart.

That would come under #1, hidden info not reported.

Naw. In 1) you assume that this is, in fact, an intelligence operation. It could just as easily be a criminal investigation having nothing to do with any foreign power OR is being used by the Ukrainians to try to embarrass the Russian government without there being ANY evidence that Russia was involved.

In most investigations, in the West, police officials rarely make blanket statements without being able to conclusively prove that certain parties are involved. And, in counter-intelligence cases, nobody knows nothin’ about nothin’.

This sounds more like politics than law enforcement or intelligence.

Ah, actually we have no idea whatsoever.

The last scene in “Goodfellas” comes to mind.

Or, it is foretelling the conclusion of The Americans which airs in an hour or so. There is no end to how far Hollywood will go to hype a show. 😉

Completely irrelevant, but….the LEOs in the video sure were nice physical specimens. 🙂