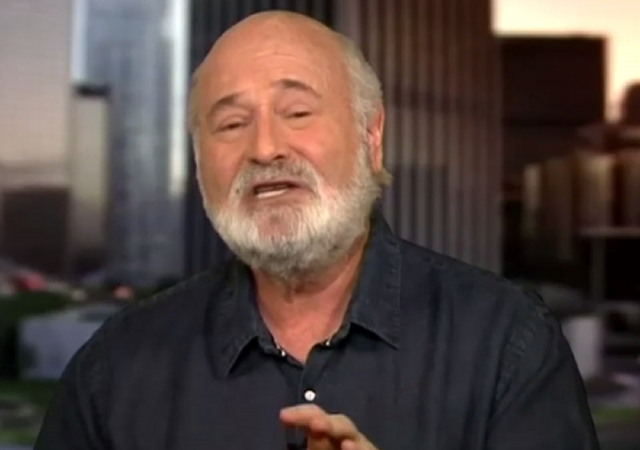 Like many of his fellow progressives, film director Rob Reiner either slept through eight years of media coverage of President Obama, or thinks you did. Trump gets hammered by 90 percent of the media or more on a daily basis, but that’s just not enough.

It drives Reiner and other leftists crazy that outlets like Fox News are allowed to exist. So what does he do? He goes on MSNBC to talk about partisan media.

Movie director Rob Reiner appeared on Friday’s Morning Joe to announce his historical verdict: This is the first time in American history that “state-run TV” networks like Fox and Sinclair ever “aligned with a president of the United States.” The networks never aligned with JFK, or Bill Clinton, or Barack Obama.

As usual, Reiner played up the Russia conspiracy theory that “the president of the United States is in conspiracy with that foreign power. This has never happened before in this country. You can see why the other side is putting out a full court press, because they know that what’s coming down the pipe, conceivably, it is the biggest scandal in American history and we are fighting right now for the soul of our democracy.”…

ROB REINER: You’re under attack. The press is under attack and right now, if you remove the ability to get the truth out, then you’re going to have the destruction of democracy. We don’t have anymore — there’s no checks and balances coming from Congress. Right now, the courts are holding, but this is the first time in American history where you have a state-run television — Fox, Breitbart, Sinclair, Alex Jones aligned with the president of the United States. That’s very, very tough. The battle lines have been drawn. And we’re going to see whether or not democracy survives.

Let’s take a look back at the liberal media’s reaction to the outcome on election night 2016. Be forewarned, there’s lots of coarse language:

Reiner is a typical leftist. They think no one remembers anything that happened before right now.

He is rapidly losing any goodwill he earned from “The Princess Bride”.

I don’t think he’s a typical anything. He’s far worse. For several months he’s been in some land where black is white, hot is cold, freedom is slavery. A place far beyond the usual Leftist, Susan Sontag-style all-consuming hatred. This is total flip city, a detachment from any possible perception of reality. I seriously wonder if perhaps he has something like an undiagnosed brain tumor.

Poor Prince Harry. He just married one of them.

This is why that annoying phrase “Liberalism is a mental disorder” is so popular in some quarters. Rob Reiner is a long-standing self-identified liberal, and yet he has lost perspective to the point that he claims to see the Emperor’s new clothes.

Other Liberals know better. Joe Lieberman, for one, Alan Dershowitz, for another and also tens of millions of nominal Democrat voters.

This is the same country that elected Barack Obama. Most of the voters that put him in office voted in the 2016 election, as well. Unless and until Democratic talking heads recognize this fundamental truth, that the 2016 election was about the issues, and particularly the poor results obtain through Democratic Party policies, the Democrats will continue to be a marginal party.

The Democrats need to take a long, hard look at their history over the last 40 years, and clean house.

“The Democrats need to take a long, hard look at their history over the last 40 years, and clean house…”

Valerie, the hell with the democrats: WE need to look in the mirror:

Pirro Blasts AG Sessions: He Is the ‘Most Dangerous Man in America’:
http://insider.foxnews.com/2018/05/20/judge-jeanine-pirro-rips-jeff-sessions-he-most-dangerous-man-america

I agree. “Liberal” has been misused to the point it’s almost meaningless. I cringe when I hear that phrase. This stupidity is better characterized as just more of the same old tired suffocatingly smug Boomer activism. They peaked in school, so everything is a freaking teachable moment to this lot, and they’re always right, irrespective of demonstrable facts.

Such a comment reveals how out of touch is the mindset of progressive thought, yet we should trust them to run things?

He is heavily effected by Trump derangement syndrome.

Poor Rob. Too many years of too many drugs.

Referring to the election night video (but not referring to the comics in it who are not there to inform), a sad thing is these are adults, grandparents even, who take losing worse than little league kids. Perhaps the popular phrase mentioned above by Valerie is actually correct.

Reiner is either ill0informed, delusional or actively engaging in disseminating misinformation. What is not in any doubt is that he sees himself as an elite, whose world view is the only correct one and he is willing to impose that worldview on everyone else, whether they agree with him of not.

His biggest problem with organs like Fox News and Sinclair is not that they exist, but that that they have been very successful in bucking the Establishment and its media organs. The Establishment media no longer has a total monopoly on information disbursement.

What’s his angle? Is he maneuvering for Congress to ban these corporate entities from the news business once the Democrats take over?

My sense is that coverage of Trump remains very unbalanced and biased toward the negative. Reiner is living on another planet.

Certain Fox programs, like Hannity and Ingraham, are in the tank for Trump. But they’re not the whole network.

“The Shorenstein Center at Harvard…” You lost most of us right there.

Hillary Clinton to get Harvard medal for ‘transformative impact society:

I promise to never again watch anything I know Rob Reiner, a true MEATHEAD of the highest order, is involved in..
James Douglass
USASA 70-73
Torii Station

Gee, how much more oroof do we need ?
No matter the name of the day – left/prog/commie etc.
IT IS A MENTAL DISORDER !

really wish we could edit

We have it too – by tolerating the following:

Pirro Blasts AG Sessions: He Is the ‘Most Dangerous Man in America’:
http://insider.foxnews.com/2018/05/20/judge-jeanine-pirro-rips-jeff-sessions-he-most-dangerous-man-america

Nobody is this stupid, not even Meathead.

These people are in a cult: “Corrupt, ignorant narcissists of the world, unite!”

And if you think this extends only to liberals, I have a George Will and Bill Crystal I want to sell you.

Money and ego: it’s the only two things that drive all these people – our nation be damned.

To that list, add McConnell, Ryan, Sessions, McCain, Graham, and the rest of the GOPe rats we stupidly keep putting back in office.

Whomever thinks they can have a rational, coherent, unemotional and factual conversation about politics and conservatism with a guy like Reiner, raise your hand.

You can’t: cornered with facts and reason, they get hysterical, and start calling you stupid.

Best route: treat them like the ignorant children they are, and blow them off. And of all things, DON’T patronize their businesses.

All that time at the bottom of the pool trying to clean out the drain hurt his brain.

He is concerned about the effectiveness of media outlets the Left does not control. Maybe because “fake news” no longer is the only news out there. When reduced to propaganda and agitprop, the “old guard” Left sreveals itself to the average person.

Witness the recent MS-13 dustup… so obvious even Chuck Todd had to admit it. Thought control and selective information is all the Left knows.

“Thought control and selective information is all the Left knows…”

Same is true for the GOPe:

Memo to George Will, Bill Kristol, and All GOP ‘Never-Trumpers’: Good Riddance!
https://www.mediaite.com/online/memo-to-george-will-bill-kristol-and-all-gop-never-trumpers-good-riddance/

John McCain: Traitor to the conservative cause:
https://www.washingtontimes.com/news/2017/jul/28/john-mccain-traitor-conservative-cause/

Meathead is going to be meathead. Nothing has changed.

Half the country believes the bozo. That is the scary part.

Time for a new term to describe Leftists who believe this nonsense – “criminally stupid”.

Meat. Head.
Dead from the neck up.