Paris: Terrorist Kills One, Wounds At Least Four Before Being Killed By Police

Paris: Terrorist Kills One, Wounds At Least Four Before Being Killed By Police

Since 2015, more than 245 people have been killed by jihadis in France 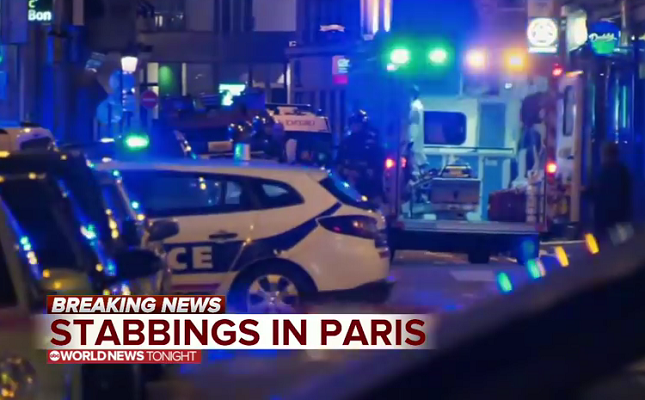 A knife-wielding Islamic terrorist shouting “Allahu akbar” attacked several people in Paris, France, killing one and wounding at least four more people.  He was shot dead by police at the scene.  ISIS has claimed responsibility for the attack.

A knifeman has killed one person and wounded four in a suspected terror attack in central Paris, French officials say.

The attacker was then shot dead by police in the Opéra district. Witnesses say they heard him shout “Allah Akbar”.

So-called Islamic State (IS) later said one of its “soldiers” had carried out the attack on Saturday evening.

Judicial sources told French media the attacker was a man born in 1997 in the southern Russian republic of Chechnya.

The sources said his parents had been held for questioning.

Interior Minister Gérard Collomb said the victim of the attack was a 29-year-old man, but gave no further details.

The attacker began stabbing passers-by at about 21:00 local time (19:00 GMT) on the rue Monsigny.

Eyewitnesses described him as a young man with brown hair and a beard, dressed in black tracksuit trousers.

The man tried to enter several bars and restaurants but was blocked by people inside. Police arrived at the scene within minutes.

They first tried to stop the assailant with a stun-gun before shooting him dead.

The dead Islamic terrorist was known to French police and was in “a nationwide database of thousands of people who had suspected links to radicalism.”

The man behind a deadly knife attack in central Paris was born in Chechnya and had been on police radar for radicalism, French authorities say.

The attacker was shot dead by police after stabbing a 29-year-old man to death and injuring four others, among them a citizen of China and another of Luxembourg, in a lively neighbourhood near the Opera Garnier on Saturday night.

The assailant had been on a nationwide database of thousands of people who had suspected links to radicalism, according to a judicial official.

The AFP is reporting that more than 245 people have died in terror-related attacks since the 2015 Charlie Hebdo attack.

The deadly stabbing in Paris, which has prompted a terror probe, comes after three years of major attacks that have claimed the lives of 245 people across the country since the 2015 Charlie Hebdo shootingshttps://t.co/TyZKypCkxN

From the AFP report:

Here is a recap of jihadist attacks that have killed more than 245 people across France since the 2015 Charlie Hebdo shootings.

– March 23: Gunman Radouane Lakdim killed four people in the southern towns of Trebes and Carcassonne, including policeman Lieutenant-Colonel Arnaud Beltrame who was hailed as a hero for taking the place of a hostage.

Lakdim was shot dead by police after a stand-off.

– October 1: A 29-year-old Tunisian cries “Allah Akbar” and kills two young women with a knife at the main train station in the southern city of Marseille.

Ahmed Hanachi is shot dead by soldiers on patrol. His attack is claimed by the Islamic State (IS) group.

President Emmanuel Macron tweeted his praise for police and said “France is once again paying the price of blood but will not cede an inch to enemies of freedom.” https://t.co/qVgV0M5Qo4

I wonder how long the media will blame the evil NRA or a Trump voter or a Conservative Christian for this attack.

I can see a fundraising letter by the DNC now how about this as well.

I wonder if and when France and the rest of Europe will wise up and and purge their countries of this scourge? Islam is not compatible with Western civilization.

There’s never any details about the knife. Was it an assault knife? Semi-auto? Full-auto? Was a suppressor used?

A 12 inch kitchen butcher knife will barely scratch a guy, but those military style knives, they’ll kill ya!

Has Student David Hogg said anything?

1) The French government feels it is worth it to show their sensitivity to Islamic terrorists.
2) Especially since no one making the decision is at any risk from it. Just the modern Third Estate.

Next it will be a ban on potato peelers. You can take eyes out with the point you know.

A minute’s thought brings up all sorts of stuff that’ll have to be banned… knitting needles, needles, pins, shish-ka-bob skewers, nails, coat hangers, back scratchers (you can sharpen one end), ice picks, of course, fireplace pokers, or any of the stuff they take off you when you go to jail. Whew. And I bet I barely dented the full list.

… and a whole slew of farm tools, including pitchforks

Incident after incident in country after country. How is it conceivable, in any way, that this will end well for Europe? This seems similar to what it was like in the 1930’s-40’s. People kidding themselves to one another that it’ll be alright while secretly harboring their darkest fears. And, the world looks on. Tragic, yet avoidable.

Well, nobody can safely flee from a country under full violent revolt more than its government leaders. A welder in Bourges and his family? Not so much.

This and the yelling of “Allah Akbar”, indicates that there is no hope of ever knowing his true motivation.

Must be those damn Quakers again.

“will not cede an inch”

Since you’re already ceded a mile, this is a hollow threat.

Not to mention France being on the metric system in the first place.

Wish they would just get on with banning anything that can be used as a weapon. Sooner they get to prison level restrictions the better, because finally someone will remember that even the inmates find ways to make shivs, and will call the whole thing off.

How can so many people be so stupid.

Ban away, but eventually jihadists will kill with rocks and sticks. They already stone people to death. And throw them off buildings. Rocks, sticks, and buildings over two stories are gonna have to go.

The truly sad thing about these attacks is that the people in the area make no attempt to stop the attacker. In this case you have a man with a knife. Five men with chairs could have beaten him into submission, if not to death in less than a minute. Instead they block business doorways and allow him to wander around seeking new vctims until the police show up. If people are not willing to defend themselves and their community, then they have lost the war.

They won’t cede an inch only because France is on the Metric system.

/take me to your litre.

Mac45, they likely have laws that make criminals out of the potential stoppers of the attack. Nonsense like disproportionate force, “this is for the police”, etc. We have areas here in the states where stepping forward guarantees legal costs in the 6 figures. So, why bother?

Possibly to stay alive. Most enlightened places, including most states in the US [with the exception of the socialists enclaves on the Northeast and Left coasts], allow people to use reasonable force to stop a violent criminal attack on themselves or others. When a society abrogates its right to self defense from active attack, civilization ceases to exist.