My entire timeline was full of posts skewering the latest Facebook feature. Then, without warning, the report-everything-you-don’t-like-without-recognizing-the-subjectivity-of-your-actions option vanished.

This is what users were seeing (I’ve removed user names and images because the internet can be an awful place): 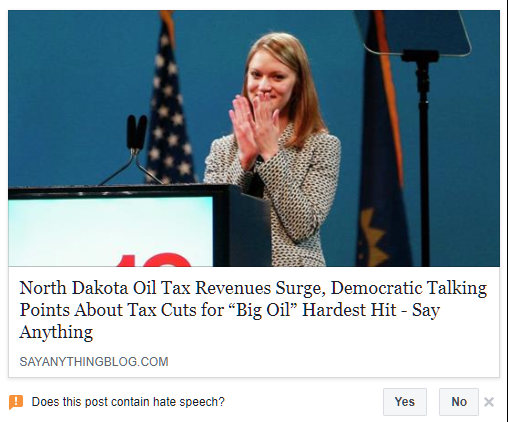 These screenshots were provided by our friends at PJ Media: 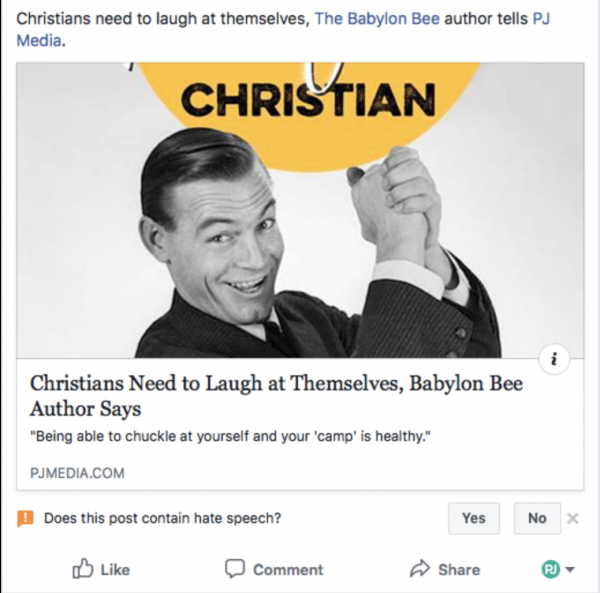 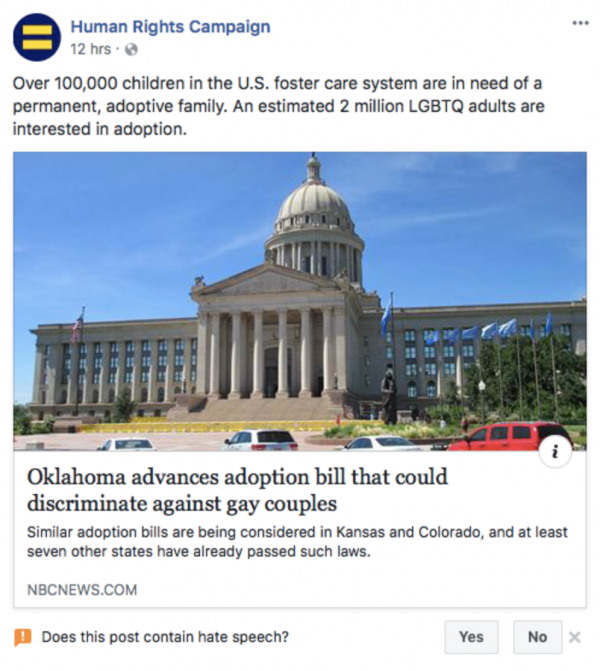 “This was an internal test we were working on to understand different types of speech, including speech we thought would not be hate. A bug caused it to launch publicly. It’s been disabled.”

They may be testing other types of speech reporting functions, but it’s a might bit curious that the option accidentally published was asking users to report hate speech.

I mean, if @facebook wants to play Stasi and have everyone reporting each other for “hate speech” for posting baby pictures or restaurant reviews, they get what they get.

What could possibly go wrong? Oh, ya know, just THIS:

Facebook’s “glitch” already caused our @TPUSA chapter at #UTAusin to get flagged for hate speech within hours of the option going live. https://t.co/zpzee8IQKu

“Hate Speech” – the new heresy. It means whatever any wannabe enforcer says it means and anyone who disagrees is, by definition, a hater (heretic).

Is there no one at facebook with even a shred of common sense?

YellowGrifterInChief in reply to notamemberofanyorganizedpolicital. | May 1, 2018 at 2:06 pm

I flagged this for hate speech.

Zuck’s people will get back to you on that. Dude looking more like something sci-fi, does he truly exist? 🙂

Sure. Just ask “Diamond and Silk” about FacistBook.

Oh yeah. I can’t see the trolls abusing the hell out of this, eventually causing a philosophy war that has both political side “hate speech” checking everything.

On the good side, this will likely hasten the demise of Facebook!

The only mistake made was that all users got to see this button. I expect that the revised version will offer this option only to Facebook’s approved Commissars determiners of what constitutes hate speech

notamemberofanyorganizedpolicital in reply to civil truth. | May 1, 2018 at 1:59 pm

Honestly, that’s exactly what I expect Facistbook to do.

A bloodthirsty comité de salut public just like Twatter has.

This site posts Twitter crap all the time. Why feed the beast? If I wanted to see Twitter stuff, i would go there.

I’m on Gab.Ai. It doesn’t censor folks, but you have to use the “mute user” button freely, or you’ll be annoyed.

I find it hateful for anyone to suggest that government should infringe on my inalienable rights.

well what do you know. no option for him. selective rules ROCK……fking ahole

Sooo….. what’s to keep FB from identifying preferred groups or individuals and giving them access to this tool? Say FB identifies someone as a good socialist SJW. FB then informs these folks that a tool will be provided to help FB identify objectionable content.

Or maybe FB says certain people, regardless of their views will be selected. But just so happens that the pool with the tool is 20 conservative, 20% independent and 60 % progressive? How would we ever know? Could not FB have two books… one to show the media and then the real breakdown? Why couldn’t they do this? There is NO regulation and they’d be breaking no rules.

I’m thinking , this is the future. And Google and FB have probably been already doing this for awhile now.

Ergo, the perpetually enraged gain the tool to influence speech on FB and homogenize it to current standards of acceptability… to them.

Farcebook is as Farcebook does. How about exercising a little judicious Leftist divestment? Divest a Leftist. Dump Farcebook and dump Google. Reduce your footprint of ideological pollution.

They did this for a short time before as well. Yet the feature didn’t work on a number of left posts, it was always available on right leaning posts. Think this would be any different? I doubt it.
Plus it’s a horrendous idea. If you don’t like a post, skip it, or better yet, as I have been doing, ignore FB. The only thing I’ve been doing there lately is going on once a week to wish my friends a Happy Birthday. 10 minutes and off.

They are claiming that the information on you can now be deleted and tracking data trashed if you want to do so. This is another BS move. You will be tracked regardless by them, it’s how they make their billions, but they will fool you into thinking it’s deleted and gone.

There’s a way something like this could be made to work.

The user labels various posts as “hate,” “offensive,” “racist,”, “fascist,” etc. An algorithm could learn from the user’s labeling which posts and pages to keep the user away from – the user can’t be “triggered” or offended by content he can’t access. After all, if the user is offended by certain types of content, only the user need be kept from seeing such content – there’s no need to take content down (keeping other people, who may not be offended, from seeing the content). This would make browsing a site like FB “safe” for snowflakes, by creating a virtual “safe space” that does not interfere with content that others may wish to see.

Of course, this is too reasonable, and would defeat the purpose of such labels, which is to prevent other people from seeing certain content. The last thing in the world SJW trolls want is a content-discrimination system that prevents them from seeing, and labeling, content that they deem “offensive.”

I love that idea!

Since posting the comment above, a friend has informed me that FB used to do exactly that. (I am not, and never have been, a user.) If so, then at some point the SJWs at FB realized the flaw in the scheme, and decided to go with the “take down” method.

I hated Facebook so much I canceled my membership/account 9 months ago.

As I’ve said before, the truth is hate speech to those that hate the truth.