He also apologizes as soon as he realizes his mistake. 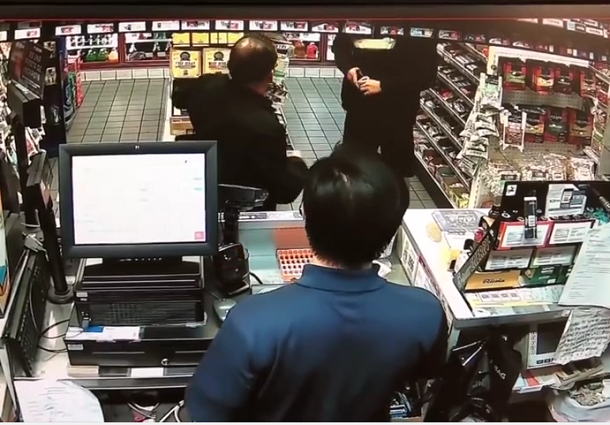 Okay, this is just strange.  A guy was buying some Mentos for his wife at a convenience store, and the guy behind him missed the transaction and sees only the guy putting the candy in his pocket.  The off-duty officer then identifies himself as a police officer, and for some reason, he draws his gun.

One minute, Jose Arreola was buying a pack of Mentos at an Orange County service station.

The next minute, he was at the business end of a gun drawn by an off-duty Buena Park police officer who thought Arreola had stolen the $1.19 roll of mints.

. . . .  Joe Domanick, associate director of the Center on Media, Crime and Justice at John Jay College, said the Buena Park officer was “way out of policy, even for Orange County.”

“It’s astounding there would be a police officer who would think it’s OK to do it,” said Domanick, author of the book “Blue: The LAPD and the Battle to Redeem American Policing.” “(It’s) entirely opposite of what’s going on in police departments. You pull a gun as a last resort.”

He continued: “It shows the officer has been poorly trained or not trained at all or he’s totally unsuited to be a police officer.”

I don’t know about all that, but it does seem a bit excessive even if the guy had been stealing a roll of delicious, chewy mints.

The officer didn’t raise his voice or aim his weapon; it looks like he was using the gun more as a badge-type identification thing since he was not in uniform.  He also apologizes as soon as he realizes his mistake.

He needs a serious time out. Maybe he should study accounting or something where he is less a danger to the public.

Yes. Study accounting. With his law enforcement experience to go with it, the FBI will snap him right up.

The clerk should have spoken up saying that the accused paid for the goods in question, but did not until he was specifically asked.

“it looks like he was using the gun more as a badge-type identification thing since he was not in uniform.”

No offense, but this made me LOL.

Going to the gun is NEVER an appropriate means of merely identifying oneself as a law enforcement officer.

Heh, I really have no idea why he drew his gun (and kind of smiled as I wrote, that, too.). The whole thing was just so bizarre that I was grasping at straws.

Glad I could make you smile, though! <3