The Met Gala 2018 was a shameless display of cultural cluelessness 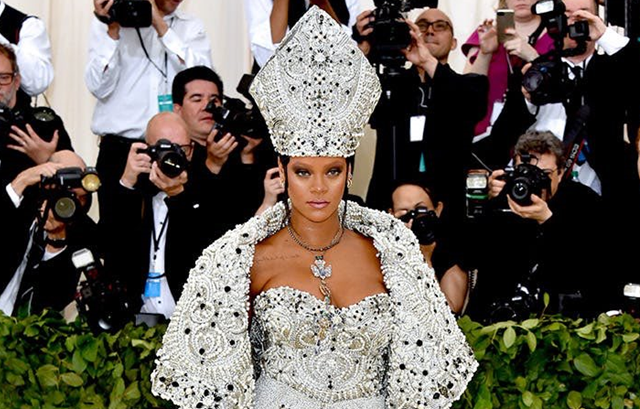 This day was inspired by the brave response of 18-year old Keziah Daum to the social media storm she sparked by wearing a gorgeous Chinese cheongsam dress for some selfies before her prom. Daum refused to apologize after she was deluged by social justice warriors with charges of “cultural appropriation.”

These accusations were lame and laughable. But Cultural Appreciation Day allows us an opportunity to examine a true instance of “cultural appropriation”: The Met Gala 2018.

The annual fundraising effort was attended by dozens of outrageously dressed A-, B-, and C-List celebrities, who came to the Metropolitan Museum of Art to celebrate the unveiling of the Costume Institute’s new exhibit, Heavenly Bodies: Fashion and the Catholic Imagination.  The stars and quasi-stars appeared in revealing and outlandish attire that was meant to shock the audience, garner social media hits, and mock Christianity.

Bolton foresaw some “practicing Catholics might perceive fashions shown as indelicate or even offensive,” but defended the curation as an exploration of the “significant influence” Catholicism has had on historical and contemporary fashion.

The key difference between “Cultural Appreciation” and “Cultural Appropriation” is intent. As the curator admitted, the exhibit and the resulting festivities were not honoring, respecting or appreciating the Catholic Church but were instead “provoking.”

Here is a glimpse of some of the more atrocious ensembles:

Sarah Jessica Parker wore a #DolceandGabbana Alta Moda gown with a cathedral train embroidered and sacred hearts, along with a Neapolitan nativity altar and sacred hearts in gold filigree to the #MetGala. #MetGala2018 https://t.co/fSCxVAL3tA pic.twitter.com/V5Z5dSJZBV

My religion is not your f*cking #MetGala dress. pic.twitter.com/s8xzpDw7jq

There’s more, but those are among the most ludicrous examples. Capping off this travesty was Madonna performing “Like a Virgin.”

Religious appropriation. There’s honoring and celebrating and then there’s disrespect and mocking. I highly doubt this would go over well if it was a different religion. But no one cares about offending Catholics #METGALA18 #MyReligionIsNotYourCostume

So disrespectful. #MyReligionisnotyourcostume@themetgala
Many Catholics take their sacraments of faith seriously.
Nothing to be mocked about.
Kirsten, Confirmation.
Kaitlyn, First Communion.
I look like I’m clapping, I probably was. pic.twitter.com/Q42CYMS6Qv

Piers Morgan gave a stinging rebuke in The Daily Mail.

I know many people don’t believe in any God or religion, let alone Catholicism, and I respect that.

All I ask in return is for my beliefs not to be rudely disrespected.

Just as I always respect other religions even if I don’t believe in what they represent.

To me, this year’s Met Gala crossed a line and was openly, brazenly disrespectful.

By doing so, it confirmed itself as an organisation of rank double standards, because everyone knows they’d have never dared do it to Islam or Judaism.

Apparently – staggeringly – the Vatican gave permission for the Gala to be ‘Catholic-themed’ because it has already provided a variety of clothes and other items for an accompanying exhibition at the Met.

To which my response is: what the hell was the Vatican thinking?

Talk Show host Silvio Canto, Jr., said he was extremely upset at the Met Gala display. He noted that the display took from the holiness associated with the imagery of the Catholic Church.

There were many options both the attendees and organizers could have taken to acknowledge the fashion influence of the Catholic Church: A tasteful crucifix necklace, a ring with an image of the Virgin Mary, a performance by devout Catholic Andrea Bocelli.

The anger at the Met Gala event was such that a number of elite media outlets published stories afterward about how it was not “Cultural Appropriation“.

Who are you going to believe: #FakeNews or your own lying eyes?

In the quest to shock, these celebrities have turned into buffoons and clowns. As more and more new media entertainment options become available, perhaps there will eventually be new stars who will return us to a Golden Age of great fashion and real elegance.

I will pray for that!

Please, Please, PLEASE dress next time mocking Islam and its dress code! Next international party in UAE or such area dig out the Mock-Islam costumes… oh please, please, please.

I thought cultural appropriation was the latest unforgivable sin among SJWs?

notamemberofanyorganizedpolicital in reply to Tregonsee. | May 12, 2018 at 4:52 pm

So SJW should all dress only in Hillary Clinton’s Depends!

We all know “cultural appropriation” is just a way for the left to find new ways to nag us until we surrender.

I to some extent agree with Leslie when she writes, “perhaps there will eventually be new stars who will return us to a Golden Age of great fashion and real elegance,” except that I think EACH WOMAN can make a real difference by dressing better than they do. The whole t-shirt and blue jeans thing doesn’t inspire men or children.

I have been wearing more colorful dresses and shoes, and find little girls now look at me. They’re so accustomed to people in drab jeans and t-shirts.

Nothing wrong with jeans and t-shirt

There’s “nothing wrong” with jeans and a t-shirt, if you don’t care that there is no femininity (sp?) left, and that we’re becoming androgynous.

But aside from those things, yeah, no harm, no foul.

Sorry that down vote was a mistake, big finger syndrome.. only inappropriate if NOT Christians or Jewish.

What is really ad is that Dolan & the Church aided & abetted this insult. Of course given the Pope’s attitude no one should be surprised.

I thought that too, had to re read it

As for not doing it to islam, we all know the truth:

No Charlie Hebdos writers there.

Now do Islam for #MeGala #MetGala2019

If stage costumes constitute cultural misappropriation then, boy, does Cher have a lot to answer for.