MSNBC corrected the story in print and via chyron.

But three senior U.S. officials now dispute that, saying that the monitoring of Cohen’s phones was limited to a log of calls, known as a pen register, not a wiretap where investigators can actually listen to calls.

NBC News has changed the headline and revised parts of the original article.

“Not a wiretap where investigators can actually listen to calls,” you say? For a wiretap to be issued (in theory, anyway), a judge has to give the go-ahead, making the process a bit more serious than a call log.

Trump attorney Rudy Guiliani told reporters as much this afternoon. 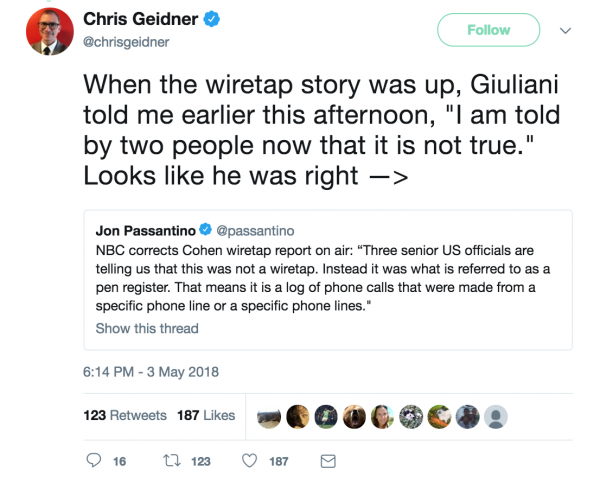 Feds, wiretaps, Trump’s attorney, scandal…I’m sure it was just good to verify.

Another Battle of the Unattributed Sources.

Just curious, but on what basis does one believe any denial by those supporting the Left, inside or outside of government, that they have violated the 4th Amendment rights of anyone not on the Left?

Especially when the denial is a retraction.

With a lineup of unattributed “sources”, of course.

Not much, but it’s all they seem to have.

Take your reasoning 1 step further: What if they’re lying about this “retraction” (they are)?

that part is easy – suppose they have the most salacious, scandalous tidbits of information that were collected from an illegal wiretap. They can’t be used in court, they can’t be used in any judicial proceeding. It’s not just that they’re “fruit of the poisonous tree”, but now that the FBI has officially denied that they exist, anything like that that comes out will be automatically branded as fake, nothing more than a clever forgery.

To clarify: Yes, they do have illegal wiretaps on everyone – this “retraction” only occurred when someone realized that SDNY was not authorized under current clearances to be engaging in that surveillance.

As ex-Trump campaign advisor Michael Caputo revealed from his interview with SC, Mueller “has everything”

I believe they have the White House itself wiretapped.

Now, I also know they will use this info in proceedings in an attempt to get Trump. This is what they did with Flynn.

They will find a corrupt judge (Contreras) who will allow this gross 4th Amendment violation evidence in legal proceedings.

Mueller and his team (and allies) are completely lawless.

That should scare the living shit out of everyone.

another story too good to check, because TRUMP!

if the #MFM runs the story, you can bet it’s #FakeNews

Fog of War? Foggy Bottom War? Or Both? Amazing supply of verbal/visual chaff these days.

MSNBC should be battling stories of hillary klinton’s indictment, along with exposure of obama’s many crimes and treason.

The reason they aren’t: a rat named Sessions.

…and every call in and out of the White House is logged by the switchboard (not recorded) so a pen register that shows calls from White House phones to/from Cohen is moot. (Cavet: Calls made by executive office Government phones also keep a log, but private ones do not.)

Something is not right here. It does not compute.

How did they learn Cohen was about to destroy evidence with a PEN REGISTER?

There’s a big piece of something very stinky missing from this puzzle.

We have a winner!

With all the crapola being unveiled about the truthfulness of the upper echelons of the FBI who the heck truly believes the feds did NOT listen in?

I don’t believe they had any evidence that Cohen was getting ready to destroy evidence. (Cohen: Hey Donald – you know that conversation we had about Stormy Daniels? Well I’m going to destroy the tape) Yeah right. If Cohen WERE going to destroy any evidence he wouldn’t do by announcing to his clients first. No, that was just the rational/justification for the Mueller specialty early morning raid on his home and offices. The judge was happy to go alone with it because she’s an Obama acolyte.

Sounds like the investigation into leaks continues. Someone was just busted.

I think they were tapping Cohen, and somewhere along the line, it was realized that releasing that information was, in and of itself, a felony. So the story was changed by the FBI/Mueller leaker.

That’s the thing that we run into here: the FBI has been proven to do enough stuff like this already, that them doing it one more time isn’t that surprising. The genie was loose the moment Rice was unmasking her political opponents; corking the bottle doesn’t put it back in.

That’s why Rosenstien needs to stop trying to hide behind redactions and the FBI needs to be cleaned up, top to bottom.

Correct. They are tapping everyone in Trump’s orbit.

Gotta love those unnamed sources familiar with the investigation. Probably other journalists coming up for air from under the swamp to pass more fake news. After all, the FISA warrant was justified by a USA Today article.
.
This is Hillary Clinton level gross negligence. Attorneys or their assistants keep phone logs, often handwritten, that they use for billing. I’m sure that was one of the first things the investigators took when they broke into (um – raided) his office. There was likely one phone call from the White House listed. If this is the case, it actually helps Trump’s case because the only thing true in the story was that there was one phone call. If this was a big deal for Trump there would have been dozens of phone calls.

What happened with this story is that it was walked back from the inference that Cohen’s phone calls were intercepted, as was the case with Flynn’s call to the Russian Ambassador, to a claim that the destination of the connection was all that was recorded. A warrant would have to be obtained for an intercept. No warrant is necessary to obtain a list of outgoing phone calls, or if it is, the evidenciary threshold is much lower than it would be for an intercept.

The release of the claim that Cohen’s phones were tapped is most likely n attempt to see what kind of reaction is generated from this information. It will also be interesting to see what criminal violation was the basis and source for any and all warrants here.

Do not believe a word of what you hear or read. I was a Naval intel officer. I can’t tell you how many belly laughs I got out the reporting on the Jessica Lynch story back during “Desert Storm II.”

Note: I never laughed at or about Jessica Lynch.

I wish I could tell you the truth about the reporting, but all I can tell you is you didn’t get the truth. Nobody was even close. Which, let’s face it, is how me want it. It’s like our unofficial motto. “In God We Trust. All Others We Monitor.”

I need to clear something up before it gets out of hand. By “all others” I meant adversarial nations/organizations and our own people. By our own people I mean Navy types whether military or civilian who may wish to compromise secrets for love or money. Or whatever. Not, NOT, ordinary Americans. You have to join our outfit in some capacity before we have the authority to keep an eye on you. Then you’re agreeing to it because we’ll tell you up front. I agreed to it.