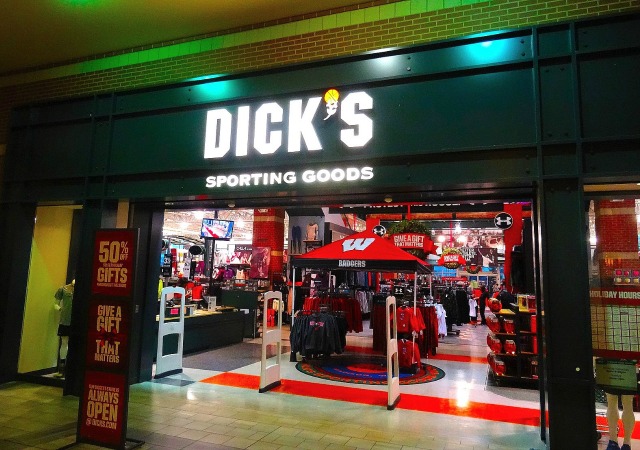 After the school shooting in Parkland, FL, on February 14, Dick’s chose “to destroy their existing inventory of AR-15s and refuse firearm sales to those under age 21.”

Effective immediately, O.F. Mossberg & Sons will not accept any future orders from Dick’s Sporting Goods or Field & Stream, and in in the process of evaluating current contractural agreements.

“It has come to our attention that Dick’s Sporting Goods recently hired lobbyists on Capitol Hill to promote additional gun control,” said Iver Mossberg, chief Executive Officer of O.F. Mossberg & Sons. “Make no mistake, Mossberg is a staunch supporter of the U.S. Constitution and our Second Amendment rights, and we fully disagree with Dick’s sporting Goods’ recent anti-Second Amendment actions.”

Guns.com reported that Dick’s has “nearly a dozen Mossberg/Maverick-branded products for sale in their catalog including Model 88, 500 and 535 shotguns and Plinkster .22LR rifles.” The Field & Stream outlets offer a larger selection of Mossberg items, “including MVP and Patriot series bolt-action rifles priced as high as $1,699.”

Others have left Dick’s behind. Ohio-based MKS chose not to sell its products to Dick’s and affiliates for the exact same reasons as Mossberg. From Guns.com:

“In recent months, Dick’s Sporting Goods and its subsidiary, Field & Stream, have shown themselves, in our opinion, to be no friend of Americans’ Second Amendment,” said Charles Brown, MKS president. “We believe that refusing to sell long guns to adults under age 21, while many young adults in our military are not similarly restricted, is wrong. We believe that villainizing modern sporting rifles in response to pressure from uninformed, anti-gun voices is wrong. We believe that hiring lobbyists to oppose American citizens’ freedoms secured by the Second Amendment is wrong.”

Founded in 1992, Hi-Point specializes in economical handguns and pistol caliber carbines while Inland, launched in 2014, produces a series of classic military firearms including variants of the M1911 pistol and M1 Carbine. According to federal regulators, MKS’s Ohio production partners — Haskell Manufacturing, Iberia Firearms, and Strassells Machine — produced 147,400 handguns and 58,600 rifles in 2016, making it one of the largest gun makers in the country by volume.

“It is clear where Dick’s Sporting Goods and its subsidiary, Field & Stream, stand on the Second Amendment, and we want to be clear about our message in response,” the company said. “Their position runs counter to what we stand for as a company. At Springfield Armory, we believe in the right and principles fought for and secured by American patriots and our founding forefathers, without question. We will not accept Dick’s Sporting Goods’ continued attempts to deny Second Amendment freedoms to our fellow Americans.”

Founded in 1974 and headquartered in Geneseo, Illinois, Springfield started business marketing commercial variants of the M14 rifle series, dubbed the M1A, still a prime cornerstone of their catalog. Since then, they have expanded to the handgun market with a line of M1911-series guns and their XD series as well as added various AR-15 models to their offerings. According to federal regulators, in 2016, Springfield manufactured 72,013 handguns and 58,504 rifles in addition to guns imported from overseas.

Dick’s suffered another loss when the National Shooting Sports Foundation, the gun industry’s largest trade association, chose not to represent the company:

“NSSF responded that business decisions should be individually made, but was nonetheless disappointed and the decision does not reflect the reality of the vast majority of law-abiding gun owners,” the organization said Friday.

I find it somewhat refreshing that these companies are doing what the left does. In a sense it is a boycott, and this particular one, while it won’t shut Dick’s down, it will hurt their bottom line. Dick’s has been in a cycle of downward sales prior to this because of their high prices for items many other stores sell for less. Their selection has also gone down a bit.

I applaud these gun manufacturers for doing this. The stance taken by Dick’s runs counter to these companies survival, and it signals to a lot of people that while they sell guns, they believe in infringing on their customers rights. The store, of course, has every right to do this, but like the leftists are starting to wake up to, actions have consequences.

I don’t boycott Dick’s, they boycott me. I’ve never been able to get service at Dick’s. I guess my appearance leads them to believe I am not their target demographic. That’s fine. There are other stores.

obviously, they find you unbearable.

I am generally dressed in a sport shirt and wash ‘n’ wear trousers. I am a big ol’ bear of a man, 6-1, 285, shoulders in separate zip-codes, and a rather lush but NEAT, full, beard. So, yes. Bearish.

I guess they want the youngsters or the 30-somethings dressed in Nike sweats and casually playing with a Mercedes or BMW-logo keyring.

March 2018 Dick’s CEO Ed Stack stated “there has been fallout from a portion of the hunting crowd, who are upset with the company’s new firearms policy. Some have said they will boycott Dick’s and its outdoors specialty shop, Field & Stream, in reaction to the company’s policy. Impact will be felt not only in firearms sales, which is already a soft sector, but also in accessories and apparel, which are high margin categories” and added “The change in our firearms policy is NOT INSIGNIFICANT (emphasis), but it is too early to measure the financial impact.”

So now they can begin to measure the significance of that decision.

I am thoroughly impressed with my Mossberg 500

The 500 design is excellent. Construction quality can be so-so; it won’t blow up, but sometimes things don’t fit together quite like they should. Still, overall, a good gun.

never had a problem with any of the Mossberg’s we own… care to explain your evaluation?

The plastic safety buttons are widely known for cracking and falling apart. Which is why there’s an aftermarket that supplies metal safety kits. Mossberg even supplies metal replacements for their plastic part.

I qualified with the Mossberg M590 when I was in the Navy. I never had a problem with one of those (not like I shot it a lot) and would get one of those. It’s the only Mossberg product I’m familiar with (being a Remington 870 and SKB over/under guy; I’m not a snob but when I was stationed in Japan an SKB sales rep used to stop by the NAS Atsugi trap range and give us special deals) But first I’d have to inspect it to make sure it was truly MILSPEC. Some on the commercial market aren’t.

My 930 JM PRO will shoot 10 slugs in less than five seconds and I hit the man sized head from 25 yards every time.

What on earth are you talking about?

I love my Mossies. I’ve got two 500s and used to have a 590. Yeah, they rattle a bit but they always go boom when I pull the trigger and they never jam. And you can accessorize the heck out of them.

My 500 is fine and the stuffed pheasant proves it.

Failing “sporting goods” retailer. I consider them the JC Penney/Sears of outdoor products. Poorly merchandised, poorly staffed and now, publicly, poorly managed. Was always my last choice for any hunting or fishing gear but now they are off the list completely. Well named company.
REI also lost me as a customer of over 30 years when they decided to halt product orders from any Vista company/subsidiary due to Vista’s ownership of a firearms company. As long as these companies insist on being SJWs, at odds with my beliefs, then I will have to spend my dollars elsewhere. Plenty of alternative providers – just not Amazon.

Lesson? Don’t be a Dick.

Can’t begin to add up the money I’ve spent on fishing, hunting and shooting supplies. I do recall that I’ve never bought anything from Dicks. Overpriced by a wide margin.
And notice the fishing aspect, lots of hunters and shooters are fisher’s. That may also impact the bottom line of their stupidity.
Oh and golf, I also play a lot of golf. Not that I ever bought from them, but again, it’s a crossover sport for hunters and shooters.

A day after Sandyhook, I was in Dick’s looking at the AR15 as a varmint gun. Shopped a few other places but Dick’s had the best price. I went back to Dick’s the following day and they were taken off the shelf. I have not been back to Dick’s. That move on their part started the financial ball rolling. They must be some special financial idiots because now they are assisting the rolling ball on purpose. 🙂

Dick’s has nothing more than way over priced Under Armour. Lesson learned, don’t be a Dick or your customers and suppliers will bail.

Commerce and politics don’t mix any better than oil and water. Taking sides in any social justice endeavor just alienates your business to at least fifty percent of the potential customers. (See: Michael Jordan)