Injured by police in a shootout 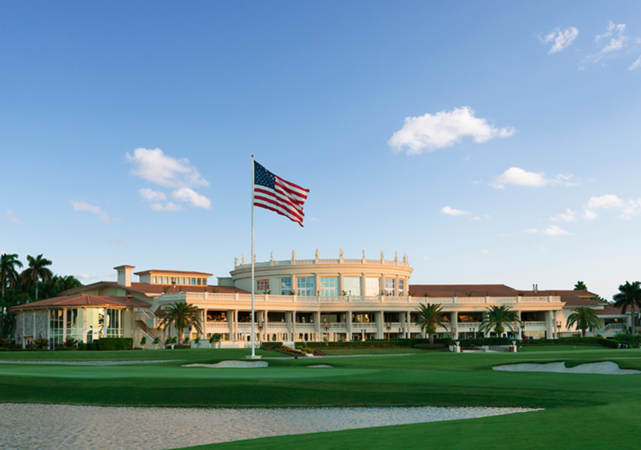 Jonathan Oddi, 42, was taken to the hospital with multiple gunshot wounds to his legs after a shootout with Miami-Dade police at a Trump-owned golf course.

Oddi snuck into the resort through a back entrance sometime around 1:30 AM ET, carrying with him an American flag he lifted from the back of the complex.

Once inside, Oddi reportedly draped the flag over the counter in the lobby and then yelled sorts of anti-Trump sentiments before pointing a gun at onlookers and shooting up the lobby roof and chandeliers.

Miami-Dade and Doral police responded to the scene after receiving calls of an active shooter.

Trump was in Washington at the time.

The officers were able to stop the gunman during a shootout, with five officers firing their weapons, striking Oddi in the legs, Perez said. A Doral officer suffered a broken arm at the scene, but was expected to be OK.

“You know, these officers did not hesitate one second to engage this individual that was actively shooting in the lobby of the hotel,” the police director added. “They risked their lives knowing that that they had to get in there to save lives in that hotel.”

Miami-Dade police said they were working with the FBI and Secret Service as part of the investigation into Oddi. Specific carges against the man were not immediately announced.

Investigators also searched Oddi’s home and car, but Perez said there was no evidence of booby traps.

Perez said officers’ “heroic” actions in stopping the gunman helped to prevent what could have been a deadly tragedy.

As day was breaking Friday, the large golf facility in the growing suburb was surrounded by a heavy police presence and news helicopters hovered over the scene. The entrances were blocked, and yellow caution tape was stretched across the main gate. A Miami-Dade crime scene truck was parked inside the gate.

The golf resort previously known as the Doral Resort & Spa was purchased by the Trump Organization in 2012. Its signature course is the Blue Monster at Doral.

Typical violent democrat…no wonder they want gun control, they are a rats nest of nutters

The far left’s psychosis has much in common with Palestinian’s psychosis.

Oddi snuck into the resort through a back entrance sometime around 1:30 AM ET … Once inside, Oddi reportedly … yelled sorts of anti-Trump sentiments before pointing a gun at onlookers

No, but dinner and drinks at the club after a round of golf is. 😉

Specific carges against the man were not immediately announced.

The police are still searching for a motive….

If only there were some kind of clues…..

“…multiple gunshot wounds to his legs…”

legs hits are NOT “center mass”.

Granting that and that I was trained for center of mass targeting during my day, but depending on the layout of the lobby, and noting the difference between cover and concealment, that may have been the only shot they had. I’d want more details.

I do note with some amusement that the PIO was very careful to say that their officers entered and engaged immediately. Which can be taken as a “s*ck it Broward County Sheriff”.

Not hitting center mass probably put others in danger, and frankly, society would be better off if they had hit center mass. Am I the only person skeptical that the shooter can be redeemed?

One possibility: line of fire was aimed so as not to hit restaurant and bar patrons beyond the shooter.
Possibility 2, it’s Florida and the cops are qualified to pick up donuts, on a good day.