“Paris police have already cleared out some 28,000 migrants in the past three years” 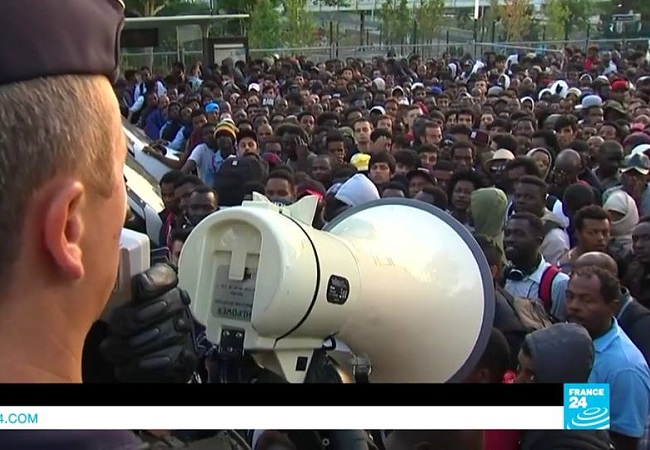 French police have started to prepare to take down illegal migrant camps in central Paris as several unauthorized encampments have recently sprung up along the city’s canal Saint-Martin. ‘Tent camps have mushroomed in recent weeks along canals used by joggers and cyclists in eastern and northeastern Paris, raising concerns for safety and public hygiene,’ the UK newspaper Daily Mail reported Wednesday.

President Emmanuel Macron is under huge pressure to deliver on the issue of illegal immigration. Elected last May, thanks to a broad Socialist-Conservative alliance scrambled together to stop the right-wing Front National candidate Marine Le Pen from coming to power, Macron’s popularity has been on the free fall ever since. In March, Macron’s popularity fell to 40 percent, its lowest point so far.

The decision to evict the encampments was taken by Marcon’s government after the city’s Socialist Mayor Anne Hidalgo refused to take action against the squatters. Associated Press reported the impending removal of the illegal migrant camps:

A burgeoning encampment in far northeast Paris, on a canal used by joggers and cyclists, is the focal point of the debate pitting French Interior Minister Gerard Collomb against Paris Mayor Anne Hidalgo, who are at odds over how to treat migrants and find a lasting solution. (…)

Expressing “regret” at Hidalgo’s refusal to take the necessary steps to allow police to evacuate the migrants, Collomb said he had no choice but to order the removal of the estimated 1,400 people living at the largest camp and others around Paris. His order is expected to be carried out in the coming days.

The interior minister made it clear in a statement that closing the improved camps would result in some migrants being expelled from France. The mayor and aid groups want the people at the camps to be moved to shelters and given help, fearing the evacuations will result in migrants simply being dispersed or summarily deported.

The eviction is the latest in the series of measures undertaken by the French authorities to clamp down on illegal migrant camps popping up across the country since the crisis began in the autumn of 2015. In October 2017, the French police dismantled the notorious ‘Jungle’ camp, known for rampant crime and violent riots, in the northern port city of Calais. Paris has been a preferred camping cite for illegal immigrants. “Migrant arrivals haven’t slowed despite police already evicting about 28,000 migrants from other Paris camps in the past three years,” German public broadcaster Deutsche Welle confirmed.

By toeing German Chancellor Angela Merkel’s line on open borders for illegal immigrants, Macron carries a big portion of blame for Europe’s continuing migrant crisis. With Britain leaving the EU, Macron wants Germany to plug the financial gap. Desperate to get Merkel’s support on the EU’s budgetary allocation, he has failed to challenge German government on its reckless refugee policy.

Macron, however, should know what’s at stake as he deals with the issue of illegal immigration. If he fails to deliver, he will be paving the way for the Front National candidate in the next presidential election.

when they are done, can they please come to Lost Angels, and show LAPD how to do that here?

…the city’s Socialist Mayor Anne Hidalgo refused to take action against the squatters.

They need to load up all the immigrant camps on trucks.

And put them all on the street where the socialist mayor of Paris lives.

If they are as bring a problem as stated, she probably won’t be mayor much longer.

When the French complain about hygiene, you know it is bad. They should do what the socialist Portland mayor does. Promise them housing and food, because in no way will that attract more to come here. On a plus note, the main encampments ARE in the area of town where the older ’60’s hippies live, and along the rails to trails projects, so those who are most to blame for the increasing problem are suffering more, as it should be.

The solution is so obvious! Allow Starbucks to invade France and their problem will be solved over night!

Starbucks has gone out of their way to announce to the world that anybody can sit in their store for as long as they want without buying anything. Free shelter and bathroom from opening to closing coupled with the nice, gentrified neighborhoods they are always in make for a perfect illegal immigrant hangout. Bet you could easily talk their patrons into buying you a venti foofoo coffee as well.

Well this is a good start………

Send them all to Merkel C.O.D.!

Deport. Rinse and repeat. After a while word will get out and no more ‘migrants’ will show up. France needs to act like it wants to survive.

Frances has never wanted to survive. To most of us, they are simply a geographical barrier between the Huns and us. And now the masses are the ones offering cake.

Moving the chairs on the titanic. Any where they go in France they will cause great problems. Paris is the tourist center and this just gets them out of their sight. the only real solution is mass deportations. Legally they have tied their own hands and are getting exactly what they deserve in muslim degradation.

France and other European countries are clear proof that every western country needs to start deporting Muslims.

Oui in America would prefer that you, oh enlightened Europeans of immigrant love, call them undocumented before you throw them out.

LOL…a year long prison sentence for illegal entry, if Trump even tweeted that there’d be calls for impeachments and even assassinations.

Since both of the latter already obtain, why hasn’t POTUS proposed that solution?

What? Is the question too hard…???

There are a couple things here.

Firstly, the fact the Frogs are doing this to head off another political party instead of doing this because its the right thing to do for French citizens really tells you all you need to know about whats going on in France!

They should be closing these illegal camps down BECAUSE its the right thing to do. What SHOULDN’T be driving this is the need to head of another political party and stop them from getting in to power!