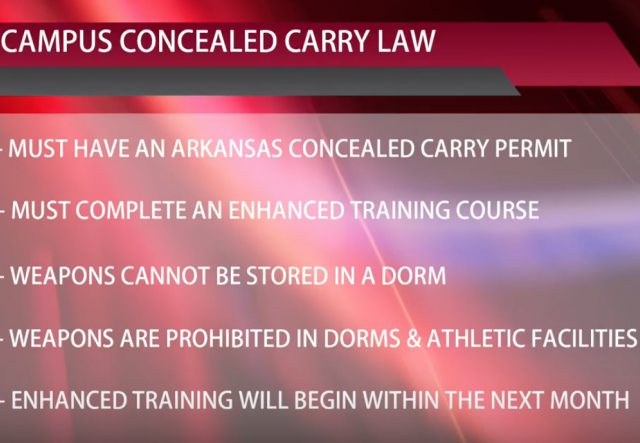 Amazing how that works…

With a full semester of the state’s new campus carry law in the rear view colleges and universities in Arkansas have little trouble to report.

Officials with Arkansas State University, the University of Central Arkansas and the University of Arkansas, Fayetteville, explained to lawmakers that the once-controversial new law trimming gun free zones at state-funded colleges and universities for those with a carry permit hasn’t created problems on campus.

“We have not seen an issue yet on campus — I’m gonna knock on some wood here,” said Capt. Chris Bentley of the University of Central Arkansas Police Department.

Under the aegis of the program, applicants for an Arkansas CHL could opt for an enhancement granted after 8 hours of additional training including a graded live-fire course that would enable them to carry their handgun on the campus of a public university, college, or community college in the state as well as some other areas currently off-limits to CHL holders. Neighboring Mississippi, a constitutional carry state, has a similar optional enhanced carry endorsement which, after training from a certified instructor, drops the types of gun free zones where a licensed CCW holder is excluded from bringing a gun.

University of Arkansas Chancellor Joseph Steinmetz points out that, while Act 562 will allow campus carry, it only applies to those with the enhancement, only covers concealed carry, and that other state laws prohibit the storage of guns in university facilities including residence halls. However, they may be stored in locked unattended vehicles on campus.

According to the National Conference of State Legislatures, 10 states allow the carrying of concealed weapons on public post-secondary campuses.

and that other state laws prohibit the storage of guns in university facilities including residence halls.

So, no matter what officialdom tries to call it, it’s not a right to keep and bear arms … if they can’t keep them.