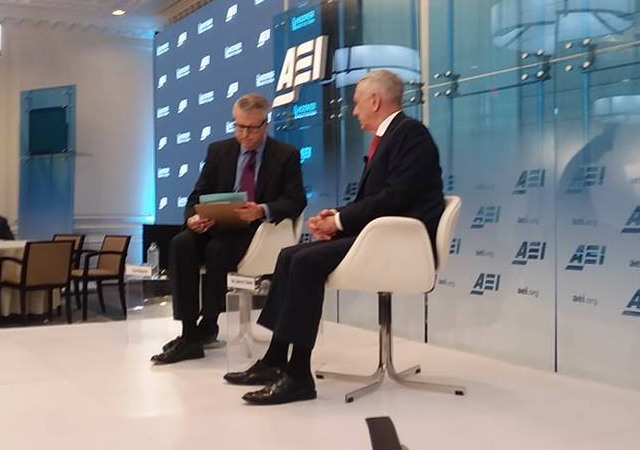 Last week, I attended an event at the American Enterprise Institute. It was a podcast summit which was a joint venture between AEI and Ricochet.

I watched several podcasts taped live, and while they were all informative and entertaining, the crown jewel was an interview with Defense Secretary James Mattis.

Mattis was interviewed by Hoover Institution scholar Peter Robinson, who you may have seen in a series of videos called Uncommon Knowledge. For anyone not in the know, Robinson was a speech writer for President Reagan and penned the famous phrase “Mr. Gorbachev, tear down this wall!”

The interview was taped and when the video or audio becomes available, I will add it to this post. I wish every American could have been in the room to see the whole thing. Mattis is not a large man, but what he lacks in stature, he more than makes up for in inner strength which permeated the room of enthralled listeners.

Robinson used the “Summary of the 2018 National Defense Strategy of the United States of America” as a guide for the interview, methodically touching upon each threat posed to America and their remedies, as prescribed by Mattis.

Here is an excerpt from the introduction:

The Department of Defense’s enduring mission is to provide combat-credible military forces needed to deter war and protect the security of our nation. Should deterrence fail, the Joint Force is prepared to win. Reinforcing America’s traditional tools of diplomacy, the Department provides military options to ensure the President and our diplomats negotiate from a position of strength.

Today, we are emerging from a period of strategic atrophy, aware that our competitive military advantage has been eroding. We are facing increased global disorder, characterized by decline in the long-standing rules-based international order—creating a security environment more complex and volatile than any we have experienced in recent memory. Inter-state strategic competition, not terrorism, is now the primary concern in U.S. national security.

China is a strategic competitor using predatory economics to intimidate its neighbors while militarizing features in the South China Sea. Russia has violated the borders of nearby nations and pursues veto power over the economic, diplomatic, and security decisions of its neighbors. As well, North Korea’s outlaw actions and reckless rhetoric continue despite United Nation’s censure and sanctions. Iran continues to sow violence and remains the most significant challenge to Middle East stability. Despite the defeat of ISIS’s physical caliphate, threats to stability remain as terrorist groups with long reach continue to murder the innocent and threaten peace more broadly.

The entire document is less than 15 pages long and you can read the whole thing here.

Mattis is a man who believes you go to war to win. He also demonstrates great humility when describing the massive budget he has been given by American taxpayers.

He believes in the ability of the American military to inspire our friends and enemies alike. He told a story of a prisoner who was brought to him after being caught trying to plant a roadside improvised explosive device and the conversation he had with the man, who asked him if model prisoner behavior at Gitmo would eventually qualify him to become a U.S. citizen.

Robinson brought out the personal side of Mattis as well, asking him about his enlistment in the Marines at age 18 and why he would want his current job at his age. The bottom line is that Mattis is a man who believes in service to his country.

Trump has picked some outstanding people for his administration. I came away from this event believing Mattis is the best one.

Until we get the audio or video, here are some tweets which will give you a sense of the event.

Secretary Mattis: “I don’t have stress. I create it.” #podcastsummit pic.twitter.com/0JwSSjdx75

If it doesn’t contribute to the lethality of the force… it’s probably not right for us. – James Mattis#UncommonKnowledge #PodcastSummit pic.twitter.com/rrcfaTSSl8

This tweet shows how great my seat was. That’s me, on the left:

Listening to Mattis speak in this forum made me feel better about the state of our military and the dangerous world in which we live. The Trump administration would be wise to have this man speak directly to the American people.

UPDATE: The video has now been posted. Watch the whole thing below:

SJWs are now wetting themselves.

Secretary Mattis is arguably the best cabinet choice in this administration.

“However, The Doctor was able to find out what happened from retired Marine Gen. Charles Krulak, who was commandant when the story took place. Every Christmas during his tenure, Krulak delivered cookies to every Marine duty post around Washington and Quantico, Va.

Back in 1998, he was making his final delivery to Marine Corps Combat Development Command headquarters at Quantico when he asked the Marine on duty who the officer of the day was.

Krulak thought the Marine had misunderstood him, so he asked again, but he got the same answer.

“I looked around the duty hut and in the back, there were two cots: One for the officer of the day and one for young Marine. I said, ‘OK, let me cut through all of this: Who was the officer who slept in that bed last night?’

At that moment, Mattis walked around the corner.

“So I said to him, ‘Jim, what are you standing the duty for?’ “And he said, ‘Sir, I looked at the duty roster for today and there was a young major who had it who is married and had a family; and so I’m a bachelor, I thought why should the major miss out on the fun of having Christmas with his family, and so I took the duty for him.’ ”

Never before or since has Krulak run into a general officer standing duty on Christmas Day.

“I think it says volumes about Jim Mattis and his leadership style,” Krulak said. “He did it very unobtrusively. He just took the duty.”

And it must have been a few tense minutes for the young Marine…..

Awesome story. I’ve heard it before, but it’s just as good the tenth time as the first.

My only quibble is with this: “And it must have been a few tense minutes for the young Marine…..”

I would say that during his conversation with General Krulak he was smiling inside. He knew he was experiencing a sea story “no sh!t” moment and if I had been him, I would have been very proud to crow long and loud that the Brigadier was standing the the watch with this “lowly” Marine.

I’ve always heard that Mattis is a very down to earth and connected very well with his junior Marines. It must have been a hell of a watch for the Marine.

Sure, he has the attitude you want a Sec Def to have, but you have to wonder about his belief in global warming and. the Iran Deal. Not sure of his judgement and values.

I have some concerns, not saying he was bad choice just some concerns.
https://www.americanthinker.com/blog/2018/05/why_do_we_have_such_a_liberal_secretary_of_defense.html

few links there worth looking at.
I do really dislike his Israel 2 state solution.

So I’m guessing we won’t be lowering physical standards just to rush women into combat positions, or inducting persons with gender dysphoria who are looking for free surgery.

You mean a combat-hardened general with combatant command experience is an infinitely better SecDef than a former Ivy League lieutenant or captain turned career politician? Who’d a thunk it.