Haspel deftly handles the questions and the attitudes. 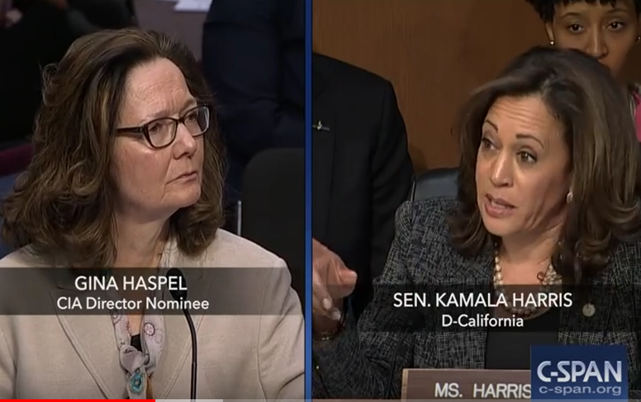 Rumor has it that President Donald Trump is soon going to send Mike Pompeo on another rescue mission.

The target? CIA Director nominee Gina Haspel, who had to undergo two tortuous exchanges with the US senators from California during her confirmation hearing.
The Junior Senator, Kamala Harris, lived down to my abysmal expectations for her. Harris’ overbearing questions about morality were demeaning, nonsensical, and completely devoid of relevance to today’s security needs.

Earlier on Wednesday, Haspel, a 33-year veteran of the agency who is currently serving as acting director, vowed not to restart the CIA’s controversial detention and interrogation program during a confirmation hearing by the Senate Intelligence Committee.

However, Haspel declined to answer “yes or no” during a tense exchange with Harris when the senator asked whether the use of interrogation tactics that critics say amount to torture was immoral.

“I believe that CIA did extraordinary work to prevent another attack on this country given the legal tools that we were authorized to use,” Haspel said in response to the senator’s question.

Personally, I was delighted to see Haspel defend the good work of her colleagues. The only way, in my opinion, it could have gone better would have been if Haspel called Harris “ma’am“.

Despite the sober, polite, and informed responses, Harris will not vote to confirm Haspel. Harris gave the following rationale for her upcoming vote:

Harris said her decision to oppose Haspel’s nomination is “not about the integrity of the men and women of that agency or its mission” but rather “about whether this particular person should head that agency.” The senator said she is concerned that Haspel “is not the best signal to the workforce of that agency, to the American people or to our neighbors around the globe”.

But we all know the real reason it’s a “no”: TRUMP!

The Senior Senator, Dianne Feinstein, questioned Haspel by using inaccurate information that has since been corrected by the original author.

The passage in question was written by former CIA lawyer John Rizzo in the book Company Man, and reports citing his book claimed Haspel ran an interrogation program at a CIA site where al Qaeda suspect Abu Zubaydah was interrogated, but Rizzo has corrected that claim. Feinstein asked her question after saying she likes Haspel “personally very much,” and Haspel took the opportunity to correct the senator regarding Rizzo’s writing.

“Senator, I am so pleased you asked me that question,” Haspel said before saying she did not run the program and noting Rizzo corrected the record.

“If you have your staff check, Mr. Rizzo has issued a correction,” Haspel said.

Feinstein at least has the potential to be more reasonable when it comes to nominees named by Republicans.

“It’s no secret I’ve had concerns in the past with her connection to the CIA torture program and have spent time with her discussing this,” the senator said in a statement. But she added, “To the best of my knowledge she has been a good deputy director.”

Feinstein told The Bee Editorial Board that she had Haspel over to her home for dinner after the latter moved from London, where she’d served as chief of station for the CIA’s Europe Division back to Washington, D.C. in 2017 to take over as deputy director of the CIA.

However, because Feinstein is facing a more challenging election cycle than usual, I anticipate she will also be a no vote. Why?

I see it more as “rode hard and put away wet”.

“There is a special place in hell for women who don’t help other women.”

I’m all for holding the progs to their own standards, but DAMN that is one monumentally stupid statement. Women are obligated to help other women because… vaginas? Talk about sexist. Jeesh.

Recognizing hypocrisy does not require that one ascribe to the beliefs of the exposed hypocrite.

OMG, what a harpy that woman is.

Not even with your ….

For as long as I can remember Democrats have hammering into my head, “Don’t impose your morality on us.”

What morals you b talkin’ about, Kamala?

“Senator, Was it immoral for you to sleep your way to the top? Yes or no?”

Kamala Harris is typical of most “torture” hypocrites – virtue signaling her Righteous Moral Principles, but if her family or her city was targeted her first act would be to Google up “Waterboarding for Dummies”.

At the time “enhanced interrogation” was used on the THREE captured leaders in question, congress was NOT in the dark.

Some of the self same representatives and senators willing to rake this nominee over the coals for something she didn’t originate – or have the power to stop early on – were fully informed on what was being done and the reasons for it. That they are currently. “Shocked, shocked to find gambling was going on in the casino” would be humorous of it weren’t so sadly typical of CYA operatives like those in congress.

“…Ask Nancy Pelosi. She was one of the first Americans outside the Agency to learn of the enhanced interrogation program. Did she resign in protest? Leak to the media? Loudly condemn the practice upon learning of it?

She did none of these things. According to the New York Times, interrogations began in March 2002. Pelosi was one of four members of Congress briefed on the procedures that September. The congressmen, reported the Washington Post, were “given a virtual tour of the CIA’s overseas detention sites and harsh techniques interrogators had devised to try to make their prisoners talk,” including waterboarding. No one raised objections. “Instead,” the Post continues, “at least two lawmakers in the room asked the CIA to push harder, two U.S. officials said.” The next year, when she was read into the program, Democrat Jane Harman wrote a letter protesting interrogations. No such correspondence came from Pelosi.

In fact, Pelosi knew about enhanced interrogation before Gina Haspel did. At her confirmation hearing, Haspel told Susan Collins that she did not learn of the program “until about a year into its existence.” That was months after Congress had been informed…”

I would say I find these congresscritters’ hypocrisy nauseating, except I’ve long grown used to it.

Kamala Harris in a battle of wits against any Trump nominee is laughable since she’s going unarmed.

It’s great to see that her fellow Democrat senators don’t see this and let her speak for them.

The Senate Democrats could care less about a bunch of third-world terrorists, who were active;ly waging war on the US, being tortured. What does worry them is that Haspel would likely not be in their pockets like Penetta, Petraeus and, most importantly, Brennan were. They are also afraid that Haspel would shut down their political access to CIA personnel and assets. She might not actively work against the political aims of the Progressive/Liberal Democrats, but it seems likely that she would not aid them, or allow her agency to do the same.

Mrs. Haspel has been the de facto CIA director since March this year, plus bastage Brennan gave her the thumbs up for the confirmation.

Haspel will be confirmed by the typical #resistance squeek margin.

“…vowed not to restart the CIA’s controversial detention and interrogation program during a confirmation hearing by the Senate Intelligence Committee.”
Why? I see nothing wrong with doing that to people who would harm Americans. It is part and parcel of being a terrorist. McEnerny said that is how McCain earned the name Songbird…he was waterboarded.

She made the point several times that the CIA was not equipped to handle interrogations. That there were other agencies who could do a better job of it.

Pure political theatre. The CIA has never been a bible study group and would not be one today if the Democrats were still running the show. Harris would be better suited to hawking erectile dysfunction products on late night cable infomercials.

Leslie — Your headline prompted me to head to the dictionary to see if you meant “tortuous” or “torturous”. I’m still not sure which; both words seem to describe Harris’ questioning. http://www.dictionary.com/e/word-fact-what-is-the-difference-between-torturous-and-tortuous/

This is what spell-check gave me. When I checked it, the definition seemed to be a match for the inanity of the confirmation hearing.

The simplest answer to Sen. Harris’ morality question would have been something to the effect that, to the extent enhanced interrogations likely saved a single American life, yes, I consider it moral. It was disappointing Director Haspel did not respond accordingly.

Ewww! Do I have to watch Kamala Harris make a fool of herself again?

Clumsy, beyond belief. That woman has more flounce to the ounce than a a high school girl debating.

What’s galling about this is how perverted the advise and consent function of the various Senate committees has become since that overweight philandering liar from MA went after Judge Bork. The process is worthless now.

It’s become clear that the way to successful nomination is not to answer questions. Why would you? Your answer will be held against you.

In the Constitution, the vetting process here was designed to weed out crazies and the unfit, not someone who might disagree with you. God, these progressive airheads.

Too bad Haspel couldn’t get into a serious talk about what actually constitutes torture, i.e., not lights, loud music, raised voices. Remember we gave prisoners in Guantanamo Korans, which they promptly flushed down the toilets!

If you have years to get the information, the info isn’t time sensitive, you can go easy, build trust, etc. If you need to know where the bomb is NOW, well.

I’d like to pose a hypothetical to these craven Democratic frauds: a 20 megaton nuke is buried somewhere in Manhattan, set to go off in 12 hours. You have in custody one of the men who planted the bomb. He isn’t talking.

What do you do?

I know, I know Jack Bauer.

I know the answer

1) they use their special status to get some poor SOB to violate the laws against torture that they passed. Waterboarding saves their city.

2) afterwards, they declare the poor SOB a war crimminal and lock him up.

Gina Haspel will not be bullied. She stands her ground and keeps her head.