Branco Cartoon – Missed By THAT Much

Branco Cartoon – Missed By THAT Much 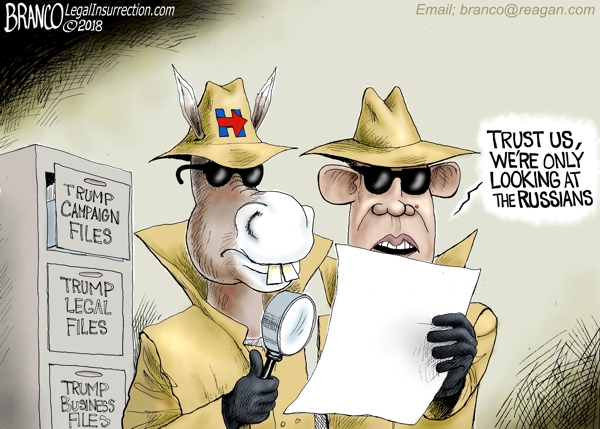 I’m sure they are going to be trustworthy and only look at things pertaining to the alleged crime.

Hahahahaha. yeah right. And Sessions has 1000’s of indictments waiting to go for months now.

That’s a good one, Branco!

Trump just tweeted Bongino naming Brennan As the architect of the coup attempt and suggesting he will be indicted.

Brennan seems to be a bit edgy these days.

Excellent, Mr. Branco. What Obama did was several orders of magnitude worst than what Nixon did. One can only hope that “It’s the coverup” still applies.

The Obama Administration and their 5th columnists within the government would not have dared their criminal activities if they hadn’t been so sure Hillary would win.

I wondered why the hits, smears and lies about Trump never ceased and now we see why – with Hillary in office none of this would have ever come to light.

We may not “like” him as a man but he’s taking a sledge hammer to the left and the leftstream media and we sure like that!

He’s done other things that I personally like but the sledge hammer and the outing of the left is what I think will have the longest damage to the left and their media pals. And that’s all to the good.

Oh and love this cartoon which is as brilliant as Branco cartoon’s always are.