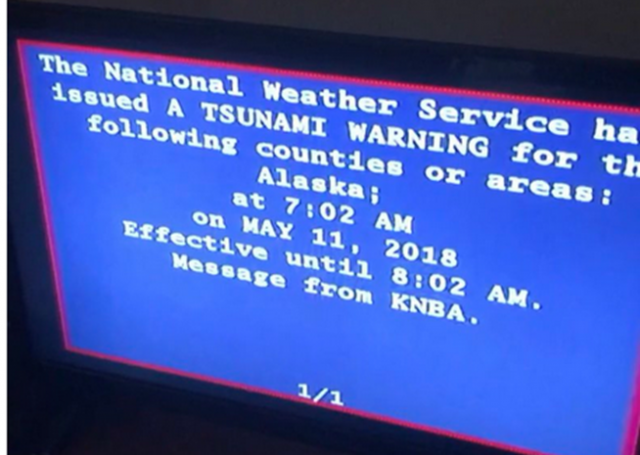 Some Alaskans awoke Friday morning to a false emergency radio and television broadcast warnings that the areas from San Diego to Alaska’s Aleutian Islands were under a tsunami threat.

Over the radio waves, it wasn’t until the end of the audio broadcast of the message early on Friday morning through KNBA radio station, that viewers were notified the alert was only a test.

On TV, the text displayed with the test message did not state it was only a test.

Inaccurate alerts were sent out to individuals over ‘phones and other media across Alaska,’ according to The National Tsunami Warning Center.

The center responded by assuring Alaskans there was not a tsunami threat on its website.

Emergency center officials indicate a problem with the system’s coding was the source of the problem.

Susan Buchanan, a National Weather Service spokeswoman, said the center’s test message was properly coded but somehow re-transmitted in an abbreviated format. That stripped the test coding and caused activation of the Emergency Alert System that sends messages to TV and radio stations.

She said it’s not clear why that happened, the agency was investigating and could not immediately provide further details. The tsunami warning center is part of the National Weather Service.

The contributing factor in this incident was the fact that the statement that it was a test came at the end of the broadcast and was not apparent on TV screens. Many people either didn’t hear or see the disclaimer, though this was not a problem in Oregon, Washington or California.

Government officials are blaming “misinterpretation” for the widespread worry.

There is no Tsunami Warning currently for Alaska and/or the West Coast. We issued a routine communications test message at 7am AKST that has been misinterpreted. We are investigating this issue. Repeat: There is NO Tsunami Warning

One Alaska resident shared her experience.

Rosemary Dunn in Anchorage, said she was more curious than panicked when the warning came through.

“I couldn’t find any earthquakes and was really perplexed,” she said.

She went online to find out that the warning wasn’t real.

…Jeremy Zidek, a spokesman for the Alaska Division of Homeland Security and Emergency Management, said there is a time limit for how long emergency alert system messages can last. This was a longer message, and from reports officials have gathered, the information indicating it was a test was cut off for some listeners and viewers, he said.

This situation is reminiscent of the false Hawaii ballistic missile warning that triggered panic among many of the state’s residents and may have induced one heart attack. A Hawaiian emergency services employee was eventually fired for his role in the incident, though no clear motivation for his issuing the false alert was ever given.

Hopefully, Alaskan emergency officials can resolve the coding and messaging problems so another false alarm does not occur. Tsunamis are deadly, and it would be tragic if real warnings were ignored because they were dismissed.

For perspective, here is a video of the 1964 tsunami in Alaska, which followed after a 9.2 magnitude earthquake struck the region.

In central Oklahoma, noon on Saturdays is when the tornado sirens are tested. It’s fun to watch visitors look around when the sirens go off on a clear day and you tell them it’s the tornado sirens.Some of them really expect to see a tornado.

Growing up in Michigan in the cold war era, the monthly Saturday siren tests were related to an attack, not weather.

So why can’t the NWS have a standard time to test their warning systems? It avoids the panic among citizens.

Translation: It’s not our fault Someone else messed up our perfect work. Don’t blame us!

The defensive response raises the question of whether they are even capable of learning from the mistake and fixing the system.

Has hawaii air-raid warden jamie lee curtis come out yet to blame Trump?

The system has been around for decades. Not one time during the horrible oppressive patriarchal 50s and early 60s did this happen.
Well, that must mean we need more alternative lifestyle hires.

said she was more curious than panicked when the warning came through.

And whose fault is that? Instant panic is obviously the only proper reaction.

Well, maybe not quite instant—first let the rubber bath duckies out, like they did with the horses when The Twister ambled by in the Wizard of Oz.

Cell phone alert did not go off…