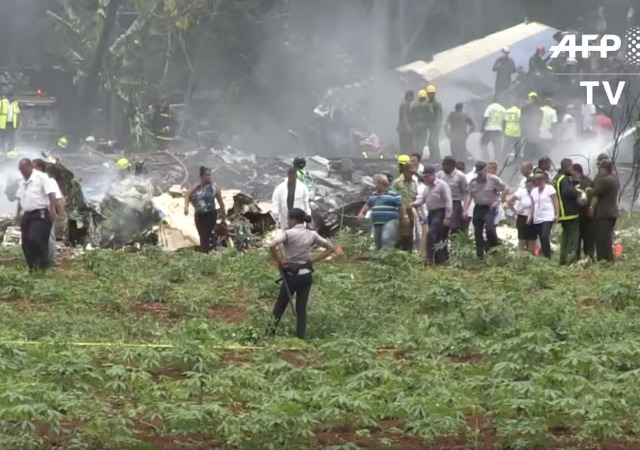 A Boeing 737 with 104 people on board crashed right after takeoff at José Martí International Airport outside of Havana, Cuba. Rescuers have found three survivors. From The Associated Press:

Authorities said there were 104 passengers and nine foreign crew members on the flight, operated by Cubana de Aviacion. An employee of a Mexican charter firm said the plane belonged to the company and it had a six-person Mexican crew.

Residents of the rural site of the crash a short distance from the end of the runway told The Associated Press they saw some survivors being taken away in ambulances, and a military officer who declined to provide his name said there were three survivors in critical condition from the Cubana airlines flight.

“It’s a disaster,” the officer said.

State media also reported there were three survivors. Cuban officials did not explicitly say that everyone else on board had perished in the crash just after noon Friday.

“My daughter is 24, my God, she’s only 24!” cried Beatriz Pantoja, whose daughter Leticia was on board the plane. Pantoja and other family members were rushed to a private area inside an airport terminal in the afternoon.

Cubana has placed many of its planes out of service due to maintenance problems in recent months.

An employee who answered the phone at the Mexico City office of Aerolinea Global Air said that the Mexican crew included a pilot and a co-pilot. The employee asked his name not be used as the company had not yet made a formal statement. Websites offering the firm’s services say it flies to Cuba and operates several 737 planes.

Firefighters rushed to extinguish flames engulfing the Boeing 737, which was meant to be on a short jaunt to the eastern Cuban city of Holguin when it went down just after takeoff from Jose Marti International Airport.

Government officials including President Miguel Diaz-Canel rushed to the site, along with a large number of emergency medical workers.