“We thank the Trump administration for addressing the harmful trade violations by the UAE and Qatar and for enforcing U.S trade agreements.” 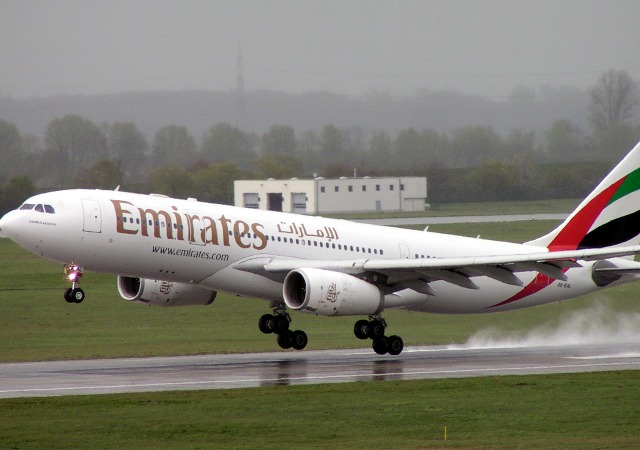 U.S. airlines have praised Trump for reaching a deal with Gulf carriers like United Arab Emirates (UAE), Etihad, and Qatar Airways after a long-running dispute that those carriers violated the Open Skies agreement and “have been unfairly using billions of dollars in subsidies from their home-country governments to stifle competition.”

The U.S. airlines allege that the subsidies “allowed the Gulf airlines to flood the U.S. travel market, driving down airfares and putting U.S. competitors and their allies at a disadvantage.” This behavior violates “the spirit of bilateral air service agreements” through free trade pacts known as Open Skies, which gives “airlines from signatory countries (mostly) unfettered access to one another’s markets.” However, the agreements mean that airlines cannot “offer fares that are artificially low, thanks to government subsidies.”

The deal reached with the Trump admin means that those Gulf carriers will publish their “financial statements that are ‘consistent with international recognized accounting standards.” The U.S. carriers alleged that the secrecy with the Gulf carriers “allowed local airlines to hide billions in government handouts.”

UAE also agreed to place a freeze on “fifth freedom” passenger flights to America, which “is where an airline from one country has the right to fly between two different countries.”

With this new agreement, Delta has started to eye more foreign travel, which includes India.

The Partnership for Open & Fair Skies (POFS) said that the agreement will protect American jobs and level the playing field:

“This agreement is a win for American jobs and shows that President Trump stands up to countries that violate our trade agreements,” said Scott Reed, campaign manager for the Partnership for Open and Fair Skies. “We are extremely pleased that the UAE has finally admitted what we have said all along – its government subsidies harm competition. This agreement will freeze Emirates and Etihad Airways from adding additional direct flights from the United States to Europe and Asia. We deeply appreciate President Trump’s leadership in enforcing our international agreements and standing up for American workers.”

Delta CEO Ed Bastian has not been one to bite his tongue when it comes to criticism of the GOP or Trump, but this time it’s different:

“Today marks a truly significant moment in a years-long pursuit of a level playing field for Delta and other U.S. carriers,” he said. “We thank the Trump administration for addressing the harmful trade violations by the UAE and Qatar and for enforcing U.S trade agreements. We are grateful to our supporters in Congress, our partners throughout the U.S. aviation industry and the tens of thousands of Delta people who made their voices heard in an effort to protect millions of American jobs and end these unfair practices.”

Delta Chief Legal Officer Peter Carter added, “For far too long, state-owned airlines in Qatar and the UAE have been able to use illegal government subsidies to compete against U.S. airlines and threaten U.S. jobs. This is a landmark step forward in the enforcement of our Open Skies agreements. We will work with the State Department and other administration officials to ensure these commitments are upheld.”

POFS emailed these statements from American and United:

American Airlines Chairman and CEO Doug Parker said: “We commend the Administration for their determination to enforce our trade agreements and stand up for U.S. jobs. Our goal has always been to ensure a level playing field. American Airlines will always compete aggressively, but we believe everyone should play by the same rules. We have the utmost confidence in our 130,000 team members who take great pride in the service American Airlines provides. Today’s actions address the illegal subsidies received by Emirates and Etihad Airways and most importantly help create a level playing for American workers.”

“From the beginning, we’ve sought to level the playing field for America’s aviation industry and the millions of jobs it supports, as well as foster competition that, ultimately, benefits the American public,” said Oscar Munoz, CEO of United Airlines. “This development signals an important step in that direction and we applaud the administration for its efforts. United Airlines will continue to work as a constructive partner in advancing a competitive environment where American aviation can thrive and consumers win.”

The Washington Post reported that the U.S. major airlines claimed that the Gulf carriers violated the Open Skies treaties, but none of the airlines delivered proof:

This may explain why the new agreement doesn’t explicitly curb Gulf carrier growth into U.S. markets. For example, while Emirates and Etihad say they have no plans to expand their transatlantic services, nothing in the agreement stops them from doing so. This reality runs counter to what U.S. airlines sought — namely, a “freeze” on Gulf carrier services into the U.S. market.

The publication also noted that while this may help these U.S. carriers, it may harm the non-major airlines like JetBlue:

The light touch by the Trump administration may also reflect the realities of globalization. Smaller U.S. carriers have become increasingly reliant on the UAE’s aviation infrastructure to fuel their own economic growth. Both JetBlue Airways and Alaska Airlines rely on Dubai-based Emirates Airlines to “feed” their domestic networks with overseas passengers. Dubai also serves as an overseas hub for U.S. shipping giant FedEx Express.

Reneging on Open Skies agreements with the UAE would economically hamstring these companies — and this would challenge President Trump’s pro-business agenda. Gulf carriers have also spent billions buying U.S.-made airplanes. Emirates, for example, operates the largest fleet of Boeing-777 jetliners, with over 160 in service and another 160-plus on order.

I’m iffy on this. Yes, I hate subsidiaries, but I also like freedom of choice. I like to try out different airlines when I travel internationally.

Sounds good. Trump is at least looking out for the USA, as opposed to finding ways to sell out the USA. So far.

There’s a related matter I hope he changes course on: the administration has tried to overrule the FAA regarding lithium ion batteries taken as freight shipments in the hold on passenger planes. Those are a dangerous cargo, the fire extinguishing system in an airliner cannot put out a lithium ion battery fire, The only thing that can is a huge quantity of water, which you can’t carry on the plane. There of already been to 747 freighters whole lost due to such fires, they have no place as air freight at all, much less as freight carried on a passenger plane. Batteries are not fresh salmon, they don’t go bad in a week. Stick them on a boat.

“The Washington Post reported that the U.S. major airlines claimed that the Gulf carriers violated the Open Skies treaties, but none of the airlines delivered proof:”

This just another example of rent-seeking by special interests.