Woman Accused Missouri Governor of Blackmail, But Now Doesn’t Know if He Took Pictures of Her

Woman Accused Missouri Governor of Blackmail, But Now Doesn’t Know if He Took Pictures of Her

In her testimony, she admitted she never saw a camera or phone. 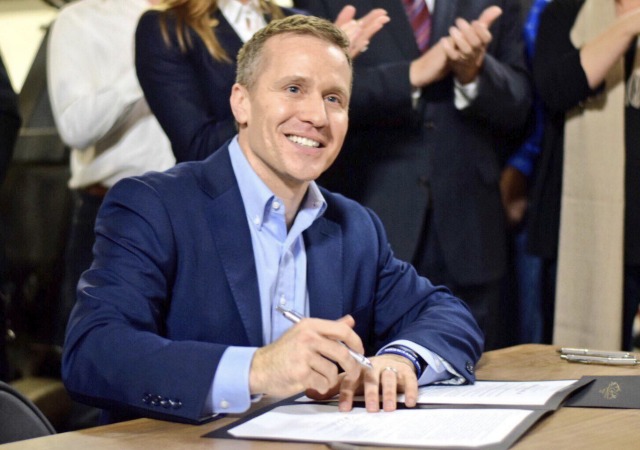 Earlier this year, Missouri Governor Eric Greitens received an indictment on felony invasion of privacy after the woman he had an affair with accused him of blackmailing her, including snapping partially nude pictures of her.

Now she admits that she doesn’t know for sure if he took pictures of her.

In a copy of the seven-page motion, obtained by the Washington Examiner, Greitens’ mistress said she might have imagined the governor’s actions in a “dream.” Greitens had not yet been elected governor at the time of their sexual affair. In the motion, his former mistress is referred to as “K.S.”

“Apparently recognizing the difficulty this testimony presented for the charges, the Assistant Circuit Attorney later asked K.S. ‘did you see what you believed to be a phone?’ K.S. answered: ‘… I haven’t talked about it because I don’t know if it’s because I’m remembering it through a dream or I — I’m not sure, but yes, I feel like I saw it after that happened, but I haven’t spoken about it because of that,” the motion said. “She later re-confirmed, however, that she could not testify under oath that she saw a phone.”

The motion from Greitens’ lawyers said prosecutors withheld that evidence, and demanded that prosecutors bring forward other exculpatory evidence they might have.

The News Tribune has more:

The court filing by Greitens’ attorneys said the woman participated in a lengthy deposition Friday. After acknowledging she hadn’t seen a camera or phone, she was asked if she saw what she believed to be a phone.

“I haven’t talked about it because I don’t know if it’s because I’m remembering it through a dream or I — I’m not sure, but yes, I feel like I saw it after that happened,” she responded, according to the court filing.

Greitens admitted the affair that started as he prepared his fun for governor. St. Louis station KMOV had a report about a conversation between Greitens and the woman that took place on March 21, 2015, and he husbanded recorded it. From The News Tribune:

In that recorded conversation, the woman said Greitens invited her into the basement of his St. Louis home, where he tied her hands to some exercise rings, blindfolded her and partially undid her clothing. She said she saw a flash through the blindfold and Greitens said to her, “You’re never going to mention my name, otherwise there will be pictures of me everywhere.” The woman said Greitens told her later in the day that he had erased the photo.

Greitens has denied blackmailing the woman but has not directly answered questions about whether he took a photo.

Prosecutors have said they do not have the photo, but have tried to retrieved it. The woman admitted that she sent partially nude pictures of herself to him in June 2015 and continued to see him after that March encounter.

Her attorneys have claimed that Greitens has allowed his attorneys “attack” the woman by “mischaracterizing her deposition testimony.”

This looks like nothing but an attempt to have him resign. This plot was not a dream, it was a nightmare. And the prosecutor needs to be prosecuted.

Another warlock hunt in the #MeToo progression?

“Greitens admitted the affair that started as he prepared his fun for governor.”

Mary, that is not merely a Freudian slip, it’s a whole ensemble.

I’ve been practicing law for 25 years and I’ve learned in that time that human recall is one of the most unreliable sources of information.

“Scott Simpson said in a statement late Monday that Greitens has admitted to the woman on multiple occasions that he photographed her without her consent and threatened to release the image if she told anyone about their relationship.”

…Assuming she didn’t dream those instances, too. Otherwise, what do they have here? Testimony he blackmailed her with a photo he may or may not have, vouched for by her attorneys and her own testimony but not with any evidence this photo even exists? Where does that leave things?

I mean it doesn’t even make sense in the first place.

So he threatened that if she told people about the affair….. he’d release a photograph proving there was an affair?

Greitens threatened to release the photo that the woman says Greitens told her he had erased on the same day he (maybe) took it?

She’s about as believable as obama’s dreams of his father.

All that’s missing are sleazebags gloria allred and her daughter lisa bloom.

You can be assured soros’ $18 billion has helped fund this scam.

So. Here we are in April, months after the Democratic prosecutor had him arrested and still no photograph. Put up or shut up, political hack.

This is just more Democratic lawfare.

The ‘investigator’ that the prosecutor hired committed blatant perjury – during his deposition he stated he would check his laptop for further records during a break, then later stated he had no further records.

Then it turned out he DIDN’T EVEN HAVE HIS LAPTOP, making it physically impossible for him to ‘check’ it.

And that’s not even getting into his incompetence of not taking notes during his interviews, asking no actual follow up questions, and writing reports of interviews weeks after the fact from memory.

This prosecutor should be disbarred.

Sounds like the investigator received his training from the FBI. They conducted the investigation in the Orlando shooter’s wife’s case in much the same inept way (which is why the jury had to acquit the terrorist’s accomplice in the shootings, even though they believed she was guilty).

The heart of the indictment is this:

“A grand jury in February indicted Greitens on one felony count of invasion of privacy for allegedly taking and transmitting the photo.”

Alas, ‘taking and transmitting.’ How can you transmit a photo that the prosecution has never seen and the defendant claims does not exist?

“The motion from Greitens’ lawyers said prosecutors withheld that evidence, and demanded that prosecutors bring forward other exculpatory evidence they might have”

Actually, I think the consequences of prosecutorial misconduct should be dismissal with prejudice.

And an official sanction by the presiding judge …

At least this is in court, how many have been disposed of in the court of media without their own day in court? The MeToo conflagration caused many to lose their positions and jobs, while also killing much chance for future employment, all based on HER word, even if it was decades ago, and the recollections don’t add up in many cases.

The Dems found a political weapon which they used, but couldn’t control. A large portion of the drive for this was yet another means to attack Trump and create turmoil.

Tar and feather her – right after hillary klinton.

Why is this a thing? They had face to face encounters. If he took pics or didn’t, so what? Invasion of privacy? She consented to undress. My gosh, this is the age of cell phone cameras, she knew this- and continued to see him.

Since when is consensual activity if revealed – a basis for legal harassment?

I’d be asking if the woman has dissociative identity disorder or PTSD. People with that can alternate their stories every hour, if they change moods.

Dig around in somebody’s past and find something shady. Smear the person with lawsuits in an attempt to get them out of their position. Can’t find evidence/don’t remember? Doesn’t matter because the damage is already done. Success!

Perhaps one of the legal beagles here can help me understand this shipt. The prosecution does not have the photograph and the (non) complaining witness has stated, under oath, that she may have dreamed the entire incident.

Why is there even going to be a trial at all?

It’s legal to take pictures of people you’re naked with. They may not like it, but I’m unaware of what law makes it illegal. To either take it, or share it. “Invasion of privacy,” okay, where’s the statute or is this out-of-whole-clothe law, made by some judge.

So, did a judge usurp the legislature’s job again?!

I’m going by memory, but the invasion of privacy was to electronically transfer it to somewhere it could be accessed by the internet. …The problem being, they don’t have the photo, they can’t access the photo. It would seem they believe a smartphone uploading to a PC is sufficient because the PC “could” be accessed by the Internet, by hackers, say, being less secure than Hillary’s home server.

Now if there’s no evidence the photo actually exists… that is a problem. But apparently it was not enough of a problem for a grand jury.

Where’s the crime? Where’s the evidence of a crime? Is this an extension of the Mueller investigation? Only the prosecutor is guilty.