The Annual Easter Showing of The Ten Commandments

The Annual Easter Showing of The Ten Commandments

The enduring classic has been a TV ratings hit since 1973. 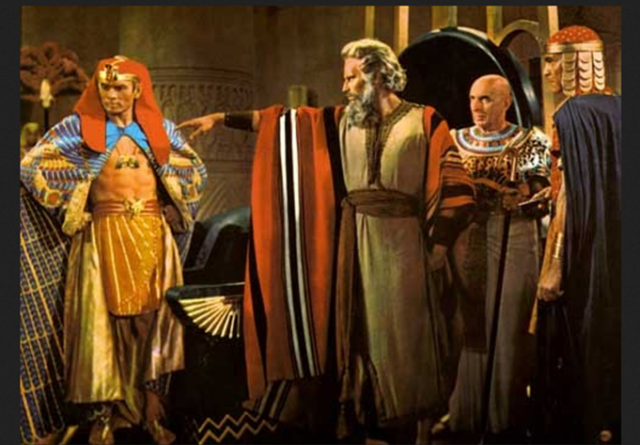 You may recall that we reviewed the ratings bonanza that was the Roseanne revival, which owed part of its success to airing something other than social justice pablum. However, the success should not have been a shock to ABC, as its programmers have always relied on the appeal of the biblical epic of Cecil B. DeMille’s 1956 version of The Ten Commandments.

The network doesn’t continue a 45-year tradition with a 62-year-old movie out of charity or religious devotion. It’s still a ratings winner. Year after year, “The Ten Commandments” wins the battle for a TV audience, often attracting twice as many viewers as the next-most-watched broadcast offering.

As a young girl, I begged my parents to let me stay up…at least until the part where Hebrews leave Egypt for good. As an Egyptophile, I always appreciated the research that went into making the Egyptian culture as accurate as possible (e.g., the inheritance of the Egypt’s throne assigned by marrying the most royal woman available).

This masterpiece certainly has stood the test of time, as it hits its 62nd anniversary. Truly, they don’t make movies like this anymore.

One reason for the enduring fascination with ancient Egypt, which I believe contributes to this film’s success, is that we can actually see some of these significant people of history through their mummies. Here is an artist’s reconstruction of the face of Ramses the Great, who is depicted in the DeMille classic, from the remains of the pharaoh:

Is there archeological proof of Moses and the Exodus to be found in Egypt? It can be very difficult to locate, as the Egyptians did not routinely record their defeat, which might have gone something like this:

“A spokesman for Rameses the great, Pharaoh of Pharaohs, supreme ruler of Egypt, son of Ra, before whom all tremble in awe blinded by his brilliance, today announced that the man Moses had kicked his royal butt for all the world to see, thus proving that God is Yahweh and the 2,000-year-old culture of Egypt is a lie.

However, there are several elements of the Exodus that are backed-up by the archeological records:

•  The cities that the Hebrews were making, Pithom and Ramses, were real. Ramses the Great (aka, Ramses II, referred to as Ramses in the remaining essay), the probable pharaoh of the Exodus, was moving Egypt’s military, trade and financial centers closer to the Delta and the main trade routes of the Mediterranean. In fact, some of the most exciting archeology currently in Egypt is occurring at these cites. His palaces and temples, which would have been fabulous, unfortunately have sunk in the moist Delta soil (the temples in southern Egypt are far better preserved, including Ramses’ Abu Simbel). Teams are slowly digging out statues, temple stones, and other items….

• There is a passage that the midwives of ancient Egypt were told to watch the “two-stones”, in order to kill the male Hebrew infants. Two stones are actually what ancient Egyptians used for birthing stools – functional, if not comfortable.

• “Pharaoh’s heart was hardened” is a concept/expression that is classically ancient Egyptian – as the actual organ of thought was deemed to have been the heart.

Finally, as the Christian Eucharist has its roots in “Passover”, watching “The Ten Commandments” is a wonderful part of the Waster Weekend.

In conclusion, I part with the words of J.R.R. Tolkien:

“Out of the darkness of my life, so much frustrated, I put before you the one great thing to love on earth: the Blessed Sacrament … There you will find romance, glory, honour, fidelity, and the true way of all your loves upon earth.”

“So let the article be written. So let it be done (or at least read)”

“Is there archeological proof of Moses and the Exodus to be found in Egypt?”

Well, maybe not Egypt, but the California desert has some proof.

I am surprised they have not found a way to erase that NRA nut Heston from the movie.

Usually I care about things like historical accuracy – but I have always adored Yul Brenner’s depiction of the Pharaoh. As they say, if that’s not what Pharaoh was actually like, well then it’s what he SHOULD have been like! For me, Yul has always been the best part of that film, and I think the only really good scene after his part of the film is done is when Edward G. Robinson mouths off and gets thrown into the Fiery Pit along with the Golden Calf Dancers.

Love the movie, though I think they have the wrong Pharaoh. 😉 Brenner’s acting is great, however.

Yes, here is a plausible argument that the Pharaoh of the Exodus was Netjerkare Siptah.

Yes, here is a plausible argument that the Pharaoh of the Exodus was Netjerkare Siptah.

GREAT film! I remember seeing it in a theater as a young man about 11 years old, with my younger brother. Our grandmother, a great lady, took us to the Rivioli, a plush movie palace in downtown Toledo, Ohio. I, too, enjoy watching it every Easter.