“Your actions…reflected discredit upon the Senate.”

Menendez has spent the last several years embroiled in a legal battle over allegations he took money and gifts from Democrat donor, Salmon Melgen.

Sen. Menendez was tried twice for corruption, the first a mistrial, and the second he was found not guilty. The lengthy legal battle left Democrats concerned they may need a backup for his seat.

In a public letter, the Senate Ethics Committee wrote:

The letter brutally detailed the charges against Menendez one by one. 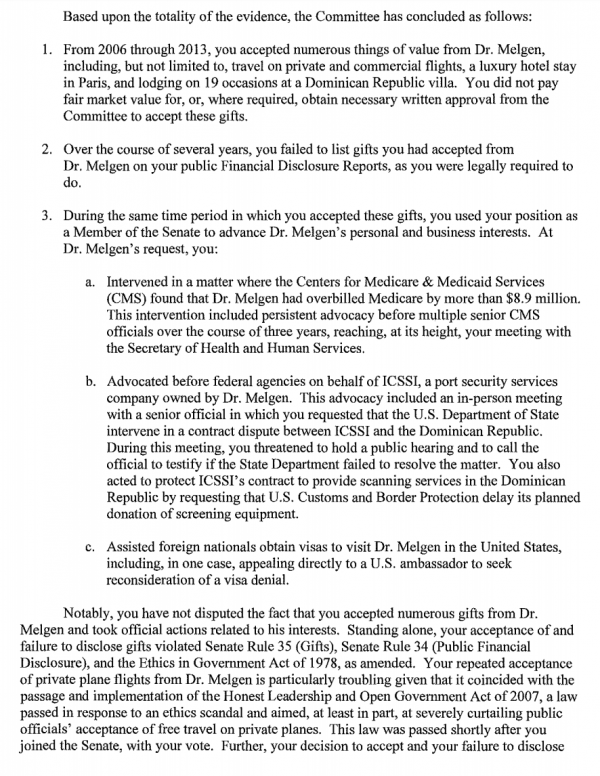 Further, they claimed Sen. Menendez’s actions, “violated Senate Rules and related statutes, and reflected discredit upon the Senate. They then ordered him to pay back in full, all gifts and to update his financial disclosure forms.

Menendez is up for re-election this year. Current polling shows Menendez holding a double-digit lead over his Republican opponent.

how can anyone discredit an institution as corrupt and sleazy as the US Senate?

or any part of Congress, for that matter?

He has to repay the gifts. Does he have to unf*ck the underage girls?

That’s outright defamation. You have no evidence whatsoever (because none exists) that he did any such thing.

Defamation? Phffttt. It’s little more than tabloid fodder for a public figure who wishes to stay as far away from a court room as possible.

God help us if we ever get to the point where jack-booted Fascists like Milhaus here can successfully sue anyone for defamation for expressing an opinion in the comment section of a blog.

The Senator is admonished to return the gifts and be more sneaky about accepting any new ones.

“Menendez is up for re-election this year. Current polling shows Menendez holding a double-digit lead over his Republican opponent.”

Golly. It’s like NJ is a deep blue state or something…

Not to worry – in NJ we like our politicians unethical and on the take – that’s why we mostly elect Dems.

Next time, they will wag their finger under his nose and say, 0sgame, shame!”

Gosh, maybe they also put him on double secret probation, too. Or would that just be too harsh?

Three of the six signatories to that letter are Dems.

Normally, one would expect the Dems to circle the wagons in defense of any accused Party member. They pretty much always do. But they didn’t in this case. The obvious implication is that Menendez has been unusually naughty, even by Dem standards.

Perhaps the Committee was working itself up to more draconian action against Menendez, and the Dems did their work by getting it down to a mere admonition and demand for payment of his outstanding bills. It’s hard to do more than speculate at this stage.

Democrats and others do not view Menendez’s crime to be the corruption, rather it is his being caught.

Oh. No. Not the old ‘Severely admonished’ punishment. Will he ever live it down. I can see his colleagues giving him the silent treatment until he breaks and resigns from his $174,000/yr salary, and joins a monastery.