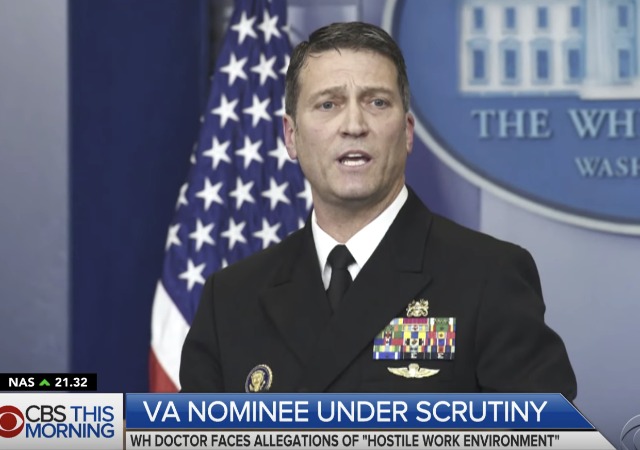 Jackson has served as the White House physician for three presidents and received praise from all of them.

Why are these allegations just now coming out? I’d think claims of overprescribing drugs would have come out a long time ago because we don’t need a careless doctor taking care of our presidents.

Anyway, committee Chairman Sen. Johnny Isakson (R-GA) and ranking member Sen. Jon Tester (D-MT) have asked for “‘any and all communication’ between the Defense Department, the White House Military Office and the White House medical unit ‘regarding allegations or incidents’ involving Dr. Jackson back to 2006.”

2006! And this information is just now getting out!?

No one has provided the media with details, but sources have said the allegations “suggest a pattern of behavior, not just one or two isolated incidents.”

There’s a theory that Dr. Jackson just threw up his hands and decided to let it all go when Trump became president. From The New York Times:

Senators were keeping the details of their investigation under wraps but let it be known that the allegations are serious. Senator Mazie K. Hirono, Democrat of Hawaii and a member of the Veterans Affairs Committee, said she had heard enough from colleagues to have “deep concerns” about the nomination. “This is concerning even for a very ethically challenging White House,” she said.

Asked if he still supported the nominee, Senator Mitch McConnell of Kentucky, the majority leader, offered only, “We’re going to wait and see what Senator Isakson and the administration recommend.”

The White House defended Dr. Jackson’s record in a statement, but did not address the nature of the claims against him.

“Admiral Jackson has been on the front lines of deadly combat and saved the lives of many others in service to this country. He’s served as the physician to three presidents — Republican and Democrat — and been praised by them all,” said Hogan Gidley, a deputy White House press secretary. “Admiral Jackson’s record of strong, decisive leadership is exactly what’s needed at the V.A. to ensure our veterans receive the benefits they deserve.”

Trump chose Jackson after he fired David Shulkin on March 28. Yes, he’s a White House physician and a one-star Navy admiral, but The Washington Post wrote that “his résumé shows little management experience” for the government’s second largest agency that employs at least 370,000 people across the country.

Senators prepped questions for Jackson about “his views on the role of private medical care for veterans, instead of the department’s government-run health care system.” Trump’s administration has pushed veterans care in this direction, but Democrats oppose this idea “out of concern it will strip the agency of funding.”

The administration brought in people from VA offices across the U.S. “to brief Jackson on issues confronting the agency,” but those close to the process have called it “poorly coordinated.”

During Trump’s conference with French President Emmanuel Macron, a reporter asked him about Jackson.

President Trump also seemed to suggest he spoke with VA Secretary nominee Dr. Jackson about withdrawing his nomination: “What do you need it for? So we’ll see what happens….I don’t want to put a man through a process like this that is too ugly and too disgusting….”

“I wouldn’t do it. What does he need it for?” Also says he will stand behind Admiral Jackson’s decision.

So it looks like Trump is giving him an out. If Jackson wants to withdraw then he can.

I freaking hate the democrats and the Rinos

No one is too honorable for the Democrats to besmirch. They’ve gone after George H.W. Bush in the past and tried to suggest he had affairs and see the latest hideous “professor” who went after Barbara Bush after she had died. The Left are truly terrible human beings and will destroy anyone who they consider to be opposition.

/me throws the BS flag… given the nature of healthcare, and the culture in the USN the last 20 years, anything of substance like that being alleged and/or insinuated, would have come to light years ago, and he never would have made Admiral.

hell, it’s hard as hell to get a prescription in the military. at least it was when i was in.

No matter what he’s done, how could he be any worse than anyone who’s run the VA over the last 20 years?

Every administration needs a secret tray.????

Or a secret ray. Both sound good.

simple, when you want corruption and hands out for snything –
hire deep state thieves.

this admiral has served 12 years as presidential Doctor – 8 of them being BHO, and (D)’s don’t want him.
if Barry had ANY conscience, he would come out and public ally
speak for this Physician – ain’t gonna happen.

think of it barry trusted this gut with his life –
but politics first and to hell with loyalty.

He should just give it back at them with both barrels. I wish someone would put a few back in there places.

I would say prove it. Hostile work environment and overprescribing drugs. Are these stated facts or flunkies.

Who cares, Trump can fire him if he really is messed up. Let get to work folks.

Hostile work environment could just simply be he demanded the people work. These days you can have trouble getting people to even show up, when they do you want them to work?!? I go through this, as does my wife, with the younger employees. It is almost as if they expect to be paid just because they show up.

Simple answer: He is the Media Focus of the Moment.

For the next N amount of time, the MSM will happily regurgitate every since claim and fantasy that makes him look bad, until we reach N+1 time where something else better shows up or the people get tired of eating this kind of (censored). At which point, his media mentions will drop to zero (except the occasional ‘controversial nominee’ title that he will wear forever) and the hounds of the Fourth Estate will bay against a different rabbit.

Senators were keeping the details of their investigation under wraps but let it be known that the allegations are serious.

Given the slow walking of President Trump’s picks, it is all about hassling the President and stopping him from success. They don’t care about positions being left unfilled.

I read an article complaining about important ambassador positions left open, and how Trump has done a poor job with this. I had to laugh given Congress’s role in making sure they don’t get filled with any expediency. It’s being done on both fronts, the media blaming Trump and the Congress slow walking every appointment so it’s a weapon to use against him. That is truly sickening.

Sideshow for some, who don’t care. Anti-Trumpers on both sides are acting like a petty,angry spouse.

Considering what the malignant marxist apparatchiks are doing to CIA Director Mike Pompeo for Sect’y of State, I’m not surprised.

So what’s the allegation? The previous worthless turds who oversaw a VA so decadent and depraved as to let vets die in waiting rooms is the gold standard that Dr. Jackson – who served 3 presidents with distinction – doesn’t measure up??

I despise these malignant marxist apparatchiks, and their RINOS comrades. They must be eliminated BY. ANY. MEANS. NECESSARY. (politically speaking, of course)

Seems like it’s perfectly timed to drive the news cycle away from a great first state dinner.
During the five today on Fox the officer evaluations of RADM Jackson were read. Going back to 2012, President Obama gave him glowing recommendations. Something doesn’t smell right with this story.

Put him on the stand and ask him if he prescribed narcotics or amphetamines to the former President.

I love that one.

CNN is saying that he was drunk and banging on a women’s door.

Well if she had not taken his keys by mistake maybe he could have gotten in his room…….

An in other news today,

Hey look over here at Ronny, everyone!

Another day of winning.

Fresh from the warlock hunts… Allegations. A preponderance of allegations. Show me the witch!

What is it with you people? Kim Kardashian is about to release her own line of lingerie and all you can talk about is politics. Who picks the stories around here?

So far we have “serious allegations” but couched in general terms, with no specific incidents or actual facts being floated. In other words, it sounds like the usual NeverTrumper BS.

Over- prescribing drugs? Which of the three presidents he treated did he have whacked out on prescription drugs? Would this explain the multiple glowing reviews Obama wrote for him and his recomendations that he be given higher rank? Inquiring minds would like to know.

No administrative experience? So we are to believe that a one-star admiral served his entire career without supervising lower-ranking personel? Only idiotoliticians who got their vast knowledge of military medical life from watching M*A*S*H reruns would believe that one.

Hostile work environment? First, either he adminstrated others or he didn’t. You can’t claim BOTH that he’s never been in charge AND that he has been in charge. Second, specifics, please. My sister who worked as a Nurse-Administrator for NY State had this one thrown at her because she had the funny notion that it’s part of your job to show up for work on time, not a favor you sometimes (or never) deign to grant to your patients, boss, and co-workers.

Vague “serious allegations” without specifics? Never have we ever seen Dems use that as a political tactic to smear people sans actual misdeeds, yup yup yup.

Another “sources say” article. Dear Ms. Chastain, if you can’t back up and prove what you are writing is fact, you’re just another gossip artist. You join the ranks of the “fake newsers.”

And I quote “No one has provided the media with details, but sources have said the allegations “suggest a pattern of behavior, not just one or two isolated incidents.” Seriously Ms Chastain?

All the salacious reporting comes from people “close to the investigation” or “who have knowledge of the subject” or “not authorized to speak” or some such. That is, the reporting is indistinguishable from being just made up on the fly.

I believe nothing in the press unless they name their source.

The whole point is to strip many agencies of funding. Shrink the monster that is our fed. gov.

And of course Dems want it as a full-employment-for-minorities program.

So what if the guy had some alcohol and had to wake up a woman in a hotel room? So what if she felt “uncomfortable”? I’d like some people at the VA to feel uncomfortable (including no doubt some women) and maybe lose their jobs unless we really need their services.

Hey. Know what the VA needs?

That’s right. A hostile work environment. (Hostile to the slackers and careerists)

There’s more than ‘The Resistance’ behind opposition to Jackson. It’s the VA unions (AFGE, SEIU, et al.) and opposition the the VA Choice program, which Jackson supports and Dems call VA ‘privatization’.

That’s ‘What’s Going on With Trump’s VA Secretray Nominee Ronny Jackson”, and why none of this crap was hurled at him until he was named for the VA post.

Correct. The Union(s) are feeling threatened.

He wasn’t vetted before becoming the personal doctor for 3 Presidents?

The only thing overprescribed in the DOD is Motrin.

The prog press and the Dems weren’t able to prevent Pompeo from being confirmed, at least it doesn’t appear they were, so this is the next attempt to hinder the Trump administration.

I was not a Trump fan and still don’t actually like the man, although I do like some of what he’s done, but the Dems are sinking their own ship with their bee-ess.