“A peace treaty should be signed in the inter-Korean summit so that we can build peace and ensure peaceful coexistence.” 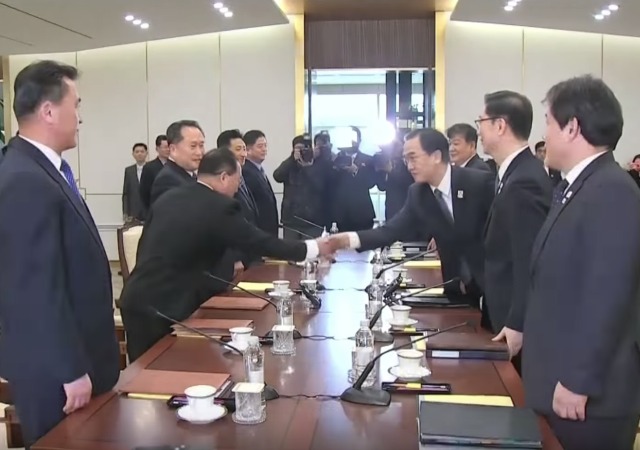 Fighting in the Korean War may have ended on July 27, 1953, when the two sides signed an armistice and established the demilitarization zone (DMZ), but the war never ended.

All of that may change next week during a summit between North Korea and South Korea. Reports indicate that South Korean officials aim to sign a peace treaty.

Culture Minister Do Jong-un said the goal of next Friday’s summit is to sign a long-awaited peace treaty. From The Financial Times:

The comments by culture minister Do Jong-whan came as the country’s conservative newspaper Munwha Ilbo said the two Koreas were discussing plans to announce an official end to the military conflict on the peninsula.

“A peace treaty should be signed in the inter-Korean summit so that we can build peace and ensure peaceful coexistence,” Mr Do told foreign media. “But it is unclear whether this will be achieved at this summit. If they can’t, they should meet again to sign the treaty.”

Citing an unidentified South Korean official on Tuesday, the Munwha Ilbo report said that South Korean president Moon Jae-in and North Korean leader Kim Jong Un might release a joint statement after their summit next Friday stating they would seek to ease military tension and to end confrontation.

It may not come easy. Seoul wants the two Koreas to sign the treaty, “guaranteed by the US and China with support from Russia and Japan, and later approved by the UN.” Pyongyang thinks the two sides “should sign a non-aggression treaty and a peace treaty should be signed between North Korea and the US.”

South Korean President Moon Jae-in hopes that the summit will “lay the foundation for a deal on de-nuclearisation between Washington and Pyongyang at the following summit” between President Donald Trump and North Korean dictator Kim Jong-un.

Moon also said the summit could possibly lead the way to a “three-way summit between the countries.” He acknowledged that without America’s “support and agreement, it will be difficult to follow through on inter-Korean agreements.”

Moon did say that his “ultimate goal” of the summit is to bring peace to the peninsula. From Yonhap news agency:

The goal is “to bring down the wall between the South and the North and build a path to co-existence and joint development,” he said. “Separated families must be allowed to reunite, exchange greetings and freely visit each other.”

South Korean officials may visit North Korea next Wednesday ahead of the summit. They hope they will receive confirmation that the North will commit to denuclearization at this meeting.

I wonder if the Little Rocketman would do this. He might if he is under pressure from China, but I don’t trust him any more than I would trust Hillary.

and a peace treaty should be signed between North Korea and the US.”

The two were never at war. The “Korean War” was Truman’s support for UN action to oppose the attack by the Norks on S.K. As the treaty making the US part of the UN had been ratified by the Senate, Truman considered the commitment of US armed forces to be required by the pre-existing and duly ratified treaty, so no declaration of war by Congress was necessary, or even appropriate.

There’s a general perception that Truman’s insistence that US military activity was a “police action” rather than a war was mere sophistry, a cute way to fight a war without admitting it, like Obama’s “kinetic action” against Libya. But Truman was not being supercilious. (Which is not to say he was right.)

It never happened again because the Communist bloc never again tried to stymie the UN by boycotting the proceedings. In much of European politics, taking your marbles and going home manages to kill pretty much anything. And that was how they tried to sabotage any UN action to oppose the Nork “liberation” of the South. Of course it didn’t work, and they never repeated that tactic.

Yet another Obama miracle.

What a shame that Colonel Potter didn’t live to see this day!

Is that how it worked for East Germany?

It’s merely the usual “peace offensive” to try to dislodge the US from the Korean peninsula.

I wonder what the folks over at MSNBC are thinking now.

PEACE breaking out under Trump (and not ‘Lightworker’ Obama).
That won’t do.

I can see it now ,Dennis Rodman with a Nobel Peace Prize

Keep the DMZ intact it has accidently become a nature preserve

Perhaps I’m too sanguine, but I’m under the impression Trump’s use of economic leverage with China has brought about good news. We really do underestimate America’s position in negotiations. We’ve got a HUGE market…..

EVERY legacy liberal “mainstream” media outlet was slamming Trump for weeks, claiming his tactics with the Norks would result in WWIII.

Instead, all actually involved in this are crediting Trump for bringing about this peace treaty.

Up next, and already being bargained over, is North Korea agreeing to de-nuclearize.

Any apologies, any retractions from the Liberal press?

Ditto for all my liberal friends on FB that were parroting their media outlets. Bunch of lemmings that never had an original thought in their lives.

They’re as silent as a grave right now.

Pirates at one time operated from bases in the Caribbean which happened to be on islands owned by France. France made no effort to clean them out as long as the pirates were more annoying to Spain than to France.

China has the same relationship with Korea as France with Tortuga. But Rocket Boy has developed a fascination for playing with matches, and the neighbors have noticed. Rather than see property values drop, China has cut off Kim’s allowance. That leaves Kim in the lurch. His economy is a train wreck, and, much like Venezuela, his government is simply not going to do what’s necessary to improve that. So like any parasite, North Korea has to start sucking blood from a new host. South Korea? Japan? The US? Or someone new, someone with lots of money. Singapore? Whatever; one or several are needed to prevent the country from collapsing. North Korea has to play nice in order to survive.

But it’s still a parasite. Now that it’s in trouble, this is no time to go wobbly.

Kim may be enough of a realist to recognize that Trump is a problem-solver, a dynamic man who would rather make a deal than let a problem fester. But he’s crippled by that Asiatic thing of having to maintain “face”. This forces him to play as if he’s a much higher roller than he really is. He’ll want to negotiate directly with the US, propping up an illusion that he’s a “world power” which can deal with a superpower like an equal. And I expect him to spring some grand delusion; maybe that any deal requiring North Korea to “de-nuclearize” means that the US must “de-nuclearize” also. Which is, of course, silly, but the Norks will insist that it isn’t. They are simply unable to do anything else.