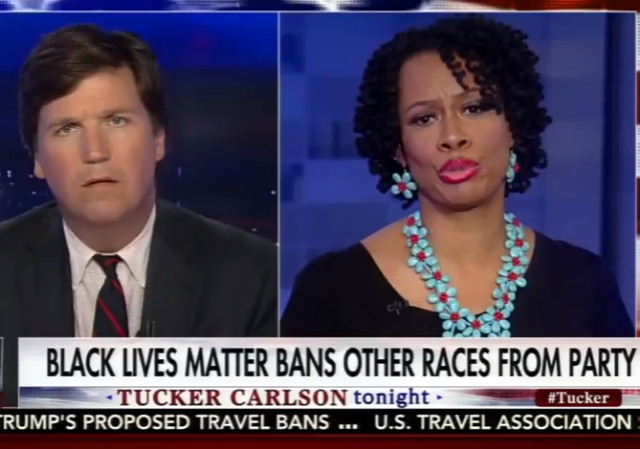 Lisa Durden was fired from her job at Essex County College following an appearance on the Tucker Carlson show during which she defended the idea of a racially segregated event. Now she’s suing.

An adjunct professor who was canned after defending a blacks-only Black Lives Matter event has sued her former employer, claiming the public college violated her free-speech rights under state law.

Lisa Durden was fired from Essex County College last year after her appearance on Tucker Carlson’s show on Fox News, but the New Jersey school has struggled to explain the legal grounds for her termination.

She made clear in a phone interview with The College Fix this week that she hopes her state lawsuit emboldens others to speak without fear.

“I want people to feel comfortable and to be able to express themselves and take a stand,” she said on the call, which was joined by her lawyer Leslie Farber.

Durden’s punishment was a “denial of civil rights” and she’s seeking “lost pay and emotional distress” caused by the college’s actions toward her, Farber said. She’s also seeking “reinstatement” in order to resolve the lawsuit.

But she’s not waiting for Essex to come calling, however. She’s a panelist on the WWOR news and talk show Chasing News, and is developing “several new projects” on her own while “always pursuing new opportunities,” she told The Fix.

Durden calls herself “a subject expert in pop culture” and has been doing it “for 10-15 years.”

No legal eagle here but isn’t it a bit of a mistake for her to appear on panels and talk shows when trying to make a case for damages due to emotional distress?

And the rules governing adjuncts are pretty college-favoring because they are essentially contractors.

So she is essentially suing for the right so speak racist ideas and to implement racist policies no matter what the school policies might be. I thought colleges were having a terrible time with all the snowflakes demanding a stop to hate speech and the like, but apparently racist speech from the Left is not considered hate speech. Oh the possibilities.

How is it that educated people don’t understand that segregation by race is racism?
Oh, yeah…

We make jokes about “its not racism if its against white people”…. but for many of the left, those are not jokes.
The progressive movement is trying to redefine racism to *only* be racism when it is against ‘marginalized’ people. They *literally* believe it is impossible for a minority to be racist against the majority.
This is why those ‘snowflakes’ don’t have a problem with such language, because it isn’t really racism…. in their world.