Iran’s currency is collapsing under threat of nuke deal being rescinded by Trump, possibility of new sanctions

Iran’s currency is collapsing under threat of nuke deal being rescinded by Trump, possibility of new sanctions 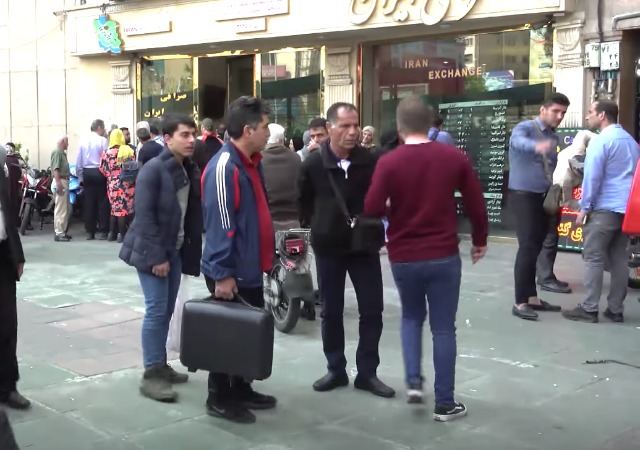 PressTV, which is affiliated with the Iranian regime, has reported that the government has revealed a plan to change to the Euro “as its official reporting foreign currency” as the country’s rial continues to plummet.

The rial’s problems have caused citizens to rush to the banks to take out US dollars. This week, 60,000 rials could be purchased for just one American dollar.

The slump comes at a time when many believe President Trump will scrap the Iranian nuclear deal put into place by President Obama. Trump’s final decision will come in early in May. For the past several months, “Iranians have rushed to buy hard currencies and gold coins in recent months” due to the possibility of America leaving the deal.

Other causes include “political feuding” and some have accused traders “of deliberately driving the currency lower with speculative bots.” It’s remained mostly unreported, but if you look on social media, there are still protests against the regime around Iran.

After the latest plummet, First Vice President Es’haq Jahangiri established a single foreign exchange rate at 42,000 rials to the dollar. From the BBC:

“We do not recognise any other rate,” Iran’s first Vice-President Eshaq Jahangiri said on a late television broadcast.

“Anyone trading at any other rate will be considered a smuggler,” he added.

The old official rate was costly to the government, and therefore limited to imports of selected goods that were deemed necessary.

Just this week the government said it could no longer offer it to students studying abroad, and they now have to buy foreign currency from the open market to pay for their tuition.

Then the Central Bank of Iran announced the change from the dollar to the Euro. From PressTV:

Valiollah Seif, the governor of the Central Bank of Iran (CBI), was reported to have said the plan would be implemented immediately after the approval of the government.

The Financial Times reported that the regime restricted Iranians to only hold €10,000 outside of banks:

Many foreign exchange shops refused to trade any currencies on Tuesday. The strong presence of security forces on Ferdowsi street, the main centre of forex dealings in downtown Tehran, created an intimidating atmosphere for traders and buyers.

“I want to convert my rials into dollars and put them under my pillow,” said Yadollah, a 31-year-old van driver who sold his car last week and hoped to use 750m rials to buy more than $17,000. “The future is gloomy and it will become horrifying after the US withdraws from the nuclear accord. I cannot afford to keep rials.”

Iran and Turkey reached an agreement to trade in local currencies instead of the dollar or Euro. Medhi Kasrraeipour from the CBI said this route is only natural since “the use of the dollar is banned for Iran and traders are literally using alternative currencies in transactions.” On March 1, Iran officially blocked imports priced in the US dollar.

Russia is also thinking about entering a deal with Iran and Turkey to receive oil payments in local currencies. Russian Energy Minister Aleksandr Novak said that, “There is a common understanding that we need to move towards the use of national currencies in our settlements. There is a need for this, as well as the wish of the parties. This concerns both Turkey and Iran – we are considering an option of payment in national currencies with them. This requires certain factors in financial and economic sector and in banking sector.”

how quickly can we exit Turkey ?
the quicker qw remove Nukes the better.

the military is now just a stooge of the islamist regime –
thank zero for that!

I like it. Give Trump credit for anything that remotely looks like a win and blame O for all the losses. When your house is burning down, blame someone else. You will feel much better as you sift through the ashes.

I missed the part about giving Trump credit. Maybe you can point it out YellowTroll.

You are fucking useless ONCE AGAIN you bring absolutely nothing to the table. You are aren’t even liberal seems you are even too dumb to be that.

Trump’s plan is working out perfectly. The hardliners will gain power. Russia will gain influence. The region can create a trading block.

Best of all, the Iranians will soon be making nuclear weapons.

His strategy is brilliant.

You are the dumbest fucker to ever be able to type (or one in a million monkey).

Russia has already gained influence did you miss the stories about the Crimea? Syria is being backed by? Gawd damn you are intentionally ignorant.

Iran is already nuclear they (like N. Korea) just need the delivery mechanism.

And we have to ask ourselves why did these things happen, let’s ponder that for a second …. YellowTroll.

my reference was to the Turkish military which was supposed to protect the Attaturk revolt against the Islamists way back when –
NOT the USA Military!!!!!

Atatürk’s Reforms
Atatürk’s Reforms were a series of political, legal, religious, cultural, social, and economic policy changes that were designed to convert the new Republic of Turkey into a secular, modern nation-state and implemented under the leadership of Mustafa Kemal Atatürk in accordance with Kemalist ideology. Central to these reforms were the belief that Turkish society would have to Westernize itself both politically and culturally in order to modernize. Political reforms involved a number of fundamental institutional changes that brought end of many traditions, and followed a carefully planned program to unravel the complex system that had developed over the centuries.More at Wikipedia

WHat do you mean “gain”? The hardliners are already in power and have been all along. The idea that there was a struggle between two factions and that we were dealing with the moderates to strengthen their hands against the hardliners was exploded years ago. Reagan fell for that trick, but he had the excuse that it was new. By the time 0bama used it again, nobody had any excuse for falling for it, but fall they did, when Ben Rhodes deliberately and cynically told them this old fairy tale. But he later admitted it had been a lie, so why are you still pushing it now?

You dumb fuck, the hard liners ALREADY have power AND they are ALREADY making Nukes thanks to the black baby jesus enabling them in his last days.

Anyone ever wonder why BitCoin is blowing up and why contrary to the big banks and finance it isn’t going away.

BTW BitCoin (and it’s spin-offs) are like the Dot-bomb, gonna implode at some point but they are the harbinger of things to come.

After the latest plummet, First Vice President Es’haq Jahangiri established a single foreign exchange rate at 42,000 rials to the dollar. From the BBC:

… the government said it could no longer offer it to students studying abroad, and they now have to buy foreign currency from the open market to pay for their tuition.

This is interesting. It means that the fixed exchange rate is entirely fictional and therefore unsustainable, and even the government knows it. And, more unusually, admits it.

It’s hard to see any possibility of financial stability with such an unrealistic policy. It looks like the Persian rial is headed toward Venezuelan bolivar and Zimbabwean dollar territory. This isn’t even a workable way to stall for time. Iran is either hoping for something radical to happen very soon, or they’re completely around the bend. Maybe both.

This is about right. Iranian legitimacy will not be settled on any battlefield but in currency markets, domestic bank collapses, and commodity inflation. The regime has no idea how to channel dissent, and demographically, dissenters increase as the Iranian population becomes younger. Obama’s utterly conventional mindset understood policy in treaties and magical thinking. It requires patience but ultimately, Iran becomes a victim of domestic suicide

What a blessing the Islamic State has been. The exchange rate in 1979 was about 70 Rials per USD.

You mean the fascist Muslims who rule Iran?