“Women of color routinely have their tone policed” 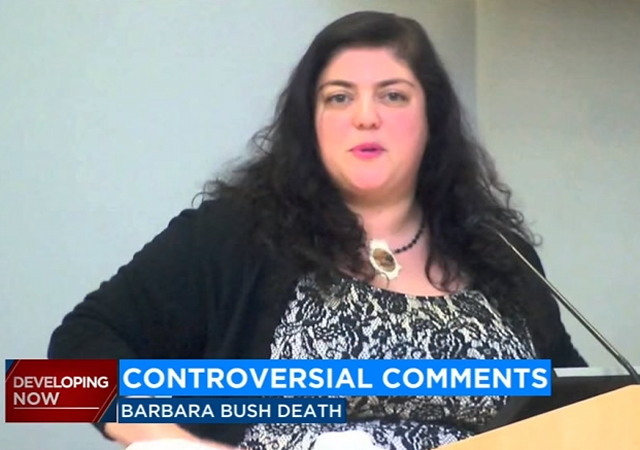 Are we supposed to suddenly believe she is the victim in all this?

Fresno State University professor Randa Jarrar, in an interview that was published on Tuesday, blamed racism for the backlash she received after attacking former first lady Barbara Bush on Twitter the day she died.

Jarrar, who is of Egyptian, Greek and Palestinian heritage, told The Cut that she believes her own race was certainly a factor in the response to her comments.

“Women of color routinely have their tone policed, their justified anger painted as hatred, and their criticism of injustice framed as racism toward white people,” Jarrar told The Cut.

After calling Bush a “racist” and the mother of a “war criminal,” Jarrar received criticism from a number who felt that she had crossed a line and should be fired. She argued back that she was tenured and therefore could not be fired.

Who knew that she was anything other than self-absorbed?

Academic tenure appeared in America about the same time as the more diffuse concept of “academic freedom”.

I suspect it was for the same reasons … and they are not what they seem.

At some point in history, the word “heretic”, “witch”, “n-lover” lost their power. “Racist” still has power because there remains a taboo to argue against the fact that something, no matter how ridiculous, is racist.

Today the word “racist” still has the ability to silence discussion, but it has lost it’s power as an epithet, describing a true characteristic of the accused.

Now, it speaks to the character of the person using the word, rather than the person being accused. We all know that, but we still play along.

“Today the word “racist” still has the ability to silence discussion,”

I disagree … I think it lost its’ sting about 2 years into the Obama administration. Though it’s true the left *thinks* it’s still a valid accusation.

“her face, at first just ghostly, turned a whiter shade of pale” – she makes the Cliffs of Dover look like coal.
What the hell “race” is “Egyptian, Greek and Palestinian”?

t is mongrel, while she is hideous. I wonder if being so ugly enhances people displeasure over her attitude?

So anybody can now use the race card by claiming they’re being attacked because they’re _________ instead of just an assh*le?

I have seen this in employees who have a huge racist chip on their shoulder. People do not like them because they are obnoxious, and also often lazy and unwilling to pull their share of the weight.

It is common for them to see dislike as racism.

She’s a paler shade of white than most “whites” I’ve seen. The Greek side of her DNA is certainly Caucasian, and whatever Egyptian/Palestinian DNA she has seems to be from slave traders and not slaves.

The pushback to her crass postings about Barbara Bush’s death has to do with the foul cesspool that passes for her thinking organ.

My favorite line from TV was on Justified a few years ago.

Raylan: “It must be hard for you at work.”
Rachel: “Because I am black AND a woman?”
Raylan: “No, because you are stupid”

Coated my wide-screen a good 10 ft away.