In other train news, Sacramento’s Capitol Corridor trains are running late because of the homeless.

The last time we checked on the California high-speed rail project, it had blasted through its budget and now may cost close to $100 billion.

As it seems the only thing that is truly high speed about this train is the speed of government spending, the US Department of Transportation is now planning to audit grants that were given for the construction.

The inspector general’s audit, announced Thursday, will examine the Federal Railroad Administration’s oversight of nearly $3.5 billion in federal grant money awarded to the project.
It comes as the plan to bring travelers between Los Angeles and San Francisco in less than three hours faces growing scrutiny.

…The authority’s new chief executive has pledged more transparency about the project’s troubles.

“We will cooperate fully in this and any other audit of our funding or program,” Brian Kelly said in a statement. “We look forward to working closely with our federal partners to deliver the nation’s first truly high-speed system.”

Voters were sold a bill of goods in 2008 when they voted for both Barack Obama and Proposition 1A, which was the bullet train measure.

Proposition 1A approved the issuance of $9.95 billion of general obligation bonds. This money is supposed to partially fund an 800-mile high speed train under the supervision of the California High-Speed Rail Authority. In 2008, when voters approved the measure, the estimate for the total cost of the project was $40 billion.

Unlike Proposition 1A, there will be consequences of the promises made during the grant process have not been met.

The federal money awarded to California comes with specific conditions that [rail authority’s new chief executive, Brian] Kelly. has promised to meet. They include completing a 119-mile segment of track now under construction in the Central Valley and finishing environmental reviews for the full line by 2022.

The audit will specifically evaluate how the Federal Railroad Administration determines whether California has complied with federal guidelines.

There is no timeline offered by the Inspector General for completion of the audit process. However, I hope it is completed in time for the gubernatorial race, and that it is an issue clearly addressed in the race.

In a fascinating development, some of the Democrats running are uninterested in continuing with Governor Jerry Brown’s legacy project. Delaine Eastin, a former Democratic member of the State Assembly and one-time superintendent of public education, is one of nearly 30 candidates running. She had this to say about continuing the bullet train:

…I can’t commit to doing it if we don’t find a revenue stream. It really is saying we’ll build a big expensive thing when we can’t afford to give kids health care, we can’t afford to educate kids. There are things that are more important than high-speed rail. If we have to walk away, we will.

In other train news: Trains along Trains along Sacramento’s Capitol Corridor are running later than before because of….the homeless.

…That’s prompted several rail agencies locally to launch crackdowns, including a joint effort starting this month between the Capitol Corridor and Union Pacific freight rail company, which owns the tracks used by many passenger services in California.

The problem has become significant enough that Kutrosky sent an email last week to passengers asking them to report any encampments or large piles of trash they notice along the tracks while on their train ride.

It appears that the Karma Train is now pulling into Sacramento Station. 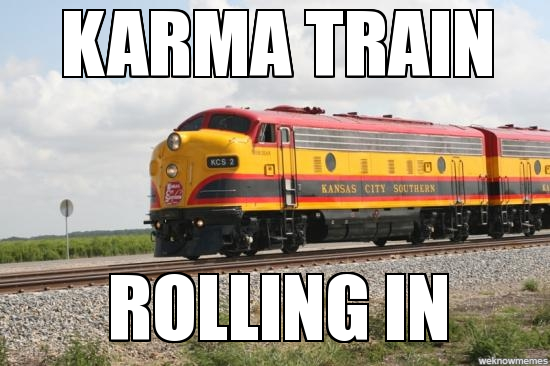 The bottom line is Hyperloop technology will make the trip in 30 minutes. Everyone knows this and no one wants to admit it. And,, if everyone put their shoulder to the plow it would cost a lot less to dig a tunnel than build a rail right-of-way.

It is 347 miles between Los Angeles and San Francisco as the crow flies. That means that your hyper loop container would have to average 694 mph to do it in 30 minutes. Your container starts at 0 mph and must go over 700 mph to make the average. Then at the other end it must slow down gradually to keep from throwing everybody against the front wall. Then there is the problem of air pressure in front of the container. Unless you can frequently exaust that frontal air you have a piston in a very long cylinder. At some point the pressure would stop the container cold because you have no greater power left. It doesn’t look very viable to me. I think your idea is as nutso as Jerry Brown’s. Tell me, I bet you hold a lot of Tesla stock.

[sarc]The air pressure in front of the module is part of the braking system to slow it back down again![/sarc]

I agree the hyperloop sounds fantastical, but so did landing two rockets simultaneously back on Earth.

I’m not going to pick a side to say a hyperloop would be economical or doable, I just wouldn’t bet against Musk’s ability to do it, if price isn’t an object.

The speed of sound, Mach 1, is 767 mph. Let’s definitely put that inside an enclosed tunnel.

I lived in So Cal from ’86 to ’98, and was fascinated with the articles in the LA Times uncovering corruption and shoddy workmanship on the subways being built in the 90s.

I seem to remember the engineering firm that won the bid beat out a Japanese firm that had shown precision and excellence building a subway for an earthquake environment. Sure enough, article after article described inspections of tunnel walls that were supposed to be 12 inches thick actually a few inches in spots. It was scary how shoddy the construction was.

So now you want to build a loop tunnel built for a hyper loop container traveling 700 mph . . . in an environment that has earthquakes . . .

If the loop is built it won’t be on a government contract so you will get much better manufacturing and it will be on time or close to projected completion and it won’t cost 5 time the original bid.

Doesn’t California have earthquakes from time to time? Aren’t they actually kinda infamous about their earthquakes? And you want to cram a bunch of people in a metal tube and run that tube at hundreds of miles per hour, underground, in an earthquake zone?

wonder how much pay to play is going on with this project. I mean it is dem controlled.

Add San Diego => net 475 miles of right-of-way, etc. for Hyperloop.
If (for whatever reason) a Hyperloop vehicle stops, the whole system, in that direction, stops.

If we want to move lots of people, efficiently, we need three dimensions vice one.

Meanwhile, SANDAG (San Diego) is proceeding with a $2 billion trolley extension that includes an elevated portion that loops under itself (!), but still doesn’t connect to the airport.