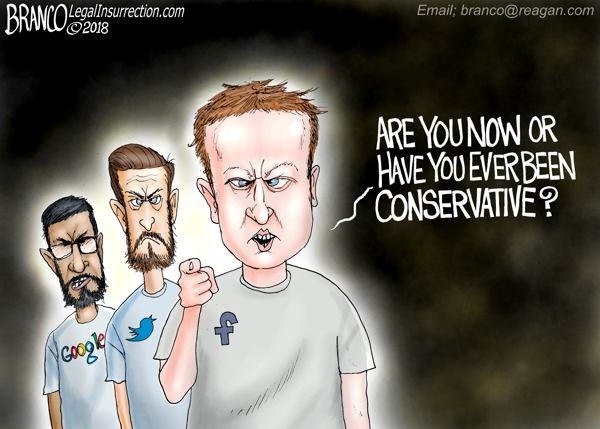 Disturbing, and their whole society shaping concepts that are now somewhat exposed will only get worse as they look to fight off government regulations. These types love big government as long as they aren’t the targets of them.

Zuckerberg is truly scary, as he comes across as a wimpy geek, but his appearance is meant to deceive.

Their fake face-masks are being ripped off.

Here’s some more examples of that.

“Why is it when Democrat-Leftists want to insult Republicans/Conservatives, they do so by calling them gay?”

The Democrats love “The Gheys” as a political victim-class, but secretly despise and shame gay individuals behind their backs.
“Of course I have gay friends.”
“Name one…” **crickets**….”

These are very odd “big brothers”.

Unlike BIG GOVERNMENT, they have nothing unless you GIVE them stuff.

If you refuse, they have nothing, and no POWER to compel production of anything.

If you haven’t had the perspicacity to walk away before now, just say “no”. Now. Today. They can’t stop you.

Exactly right – people are voluntarily giving up their information. To a degree. The most ominous and inescapable problem comes from Google and their dominance over search. Even using incognito settings is marginal regarding personal information (security). Bing is perhaps better, but I expect they are just as eager to collect and “monetize” your information.

Even if you search in a hidden way, such as with Duck Duck Go, once you click on anything you’ve announced to the internet data miners most of what they want to know and leverage anyway.

notamemberofanyorganizedpolicital in reply to casualobserver. | April 9, 2018 at 12:35 pm

To quote George Orwell’s 1984, “Some animals are more equal than others.” The corrupted Silicon Valley Elites think they’re uber-most equal above the rest of the States.

Hmmm. How exactly is this different from the bakeries that allegedly refused to make cakes for gays? If you are restricting access to a business based on religion, that has some protections, but political orientation?

Ragspierre is correct: they can only use what you give them (and for the record, I downloaded what they say they have, and it is completely minimal), but for the moment, there aren’t many viable alternatives yet if one needs one. But there will be at this rate.

If something is “free,” YOU are the commodity. Use Duckduckgo.com for starters….

notamemberofanyorganizedpolicital in reply to Dimsdale. | April 9, 2018 at 12:38 pm

Not just those in the cartoon however.

For all your wonderful work, thank you — very, very much!

And then we have California:

I want to go all liberal on their personal fortunes, companies and personal lives.
It’d be enjoyable to watch them weep.

Wonder if Branco is aware of this….

“So two vocal Trump supporters who go by the name of Diamond & Silk have been shadowbanned from Facebook.

… The reason given to them by FB was that their pro-Trump content and brand were deemed to be “unsafe to the community.”

Think about that. Supporting a sitting president is deemed too offensive to be allowed to be viewed.

And furthermore, D&S were informed that the decision is final and may not be appealed.

I hope they go to court with this. Because if a Christian baker can be forced to decorate a message on a cake, as courts have decided they must, then I see no reason why Facebook should not be similarly compelled to let D&S use its platform to propagate whatever beliefs and opinions they choose. Because these are the new rules that progressives have put up in place, so we must all live by them, right?” – Ace of Spades

“Comics Diamond and Silk Branded “Unsafe for the Community” and Banned from FaceBook; Told There Is No Appeal from This Decision

On Twitter, Diamond and Silk announced they’d been banned. Below is what they wrote, with the text stripped out and no tweets embedded.”

Professional privacy invader Mark Zuckerberg recently defended FaceBook’s spying on its customers products: You signed up for this. It spells it out in that app licensing agreement that no one reads.

Over the weekend, Android owners were displeased to discover that Facebook had been scraping their text-message and phone-call metadata, in some cases for years, an operation hidden in the fine print of a user agreement clause until Ars Technica reported. Facebook was quick to defend the practice as entirely aboveboard–small comfort to those who are beginning to realize that, because Facebook is a free service, they and their data are by necessity the products.

In its current iteration, Facebook’s Messenger application requests that those who download it give it permission to access incoming and outgoing call and text logs. But, as users discovered when prompted to download a copy of their personal data before permanently deleting their Facebook accounts, a certain amount of data was covertly siphoned without explicit permissions. Buried inside those data caches was an unsettling amount of specific, detailed information–in some cases, every phone call or text message ever sent or received on their Android device.”