Will the out-of-control Chinese space station crash into Michigan?

Will the out-of-control Chinese space station crash into Michigan? 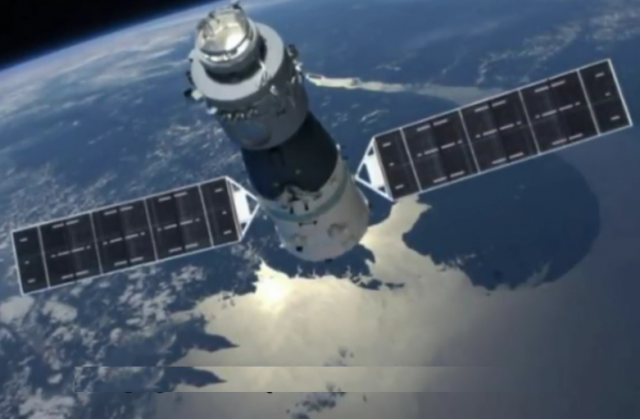 China’s Tiangong-1 spacecraft has been flying above Earth, completely out of control, since September 2016. Since then, agencies around the world have been monitoring the vehicle, trying to project where it will crash.

Experts have now narrowed the date and location of Tiangong-1’s return.

An out-of-control Chinese space station with ‘highly toxic’ chemicals onboard that is currently hurtling toward earth may crash into lower Michigan, it has been revealed.

It is believed China’s first prototype station, Tiangong-1, will come crashing back to the planet around April 3, experts say.

The map below shows the relative probabilities of debris landing within a given region. Yellow indicates locations that have a higher probability while green indicates areas of lower probability. Blue areas have zero probability of debris reentry since Tiangong-1 does not fly over these areas (north of 42.7° N latitude or south of 42.7° S latitude). 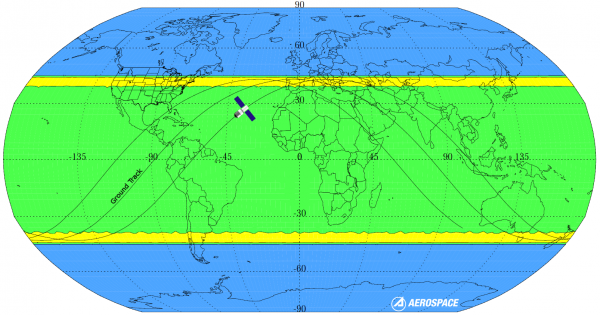 Theoretically, if the vehicle crashes into a populated area, a lot of damage could occur. Unless it hits Detroit, where the debris field will blend right in with the local landscape.

The spacecraft was historic for China, as it was its first space station.

It was launched in September 2011 and was designed to last about two years. On March 21, 2016 China said it terminated its “data service” with Tiangong-1, allowing it to eventually fall back to Earth. The Aerospace Coporation says “amateur satellite trackers have been tracking Tiangong-1 and claim it has been orbiting uncontrolled since at least June 2016.”

And now we await its arrival back to Earth, in pieces. It weights 18,740 pounds (about 8 tons) and is about 34 feet in length and 11 feet wide. There are two solar panels on it, too.

Before Tiangong slams back to Earth, there will be chances for avid sky watchers to view it.

This week through the middle of next (about March 13th), the doomed station will make 1–3-minute-long passes during convenient evening viewing hours. Tiangong 1’s magnitude will vary from as bright as 0.2 to as faint as 4 depending on the altitude of the pass. The higher, the brighter.

After the 13th (give or take), the satellite will move into the daytime sky and then reappear at dawn sky at the end of March. The dawn run concludes about April 10th. Should Tiangong 1 still be in orbit after that date, it will return to the evening sky in mid-April.

The chances of being stuck by the debris is astronomically low, no matter where the craft lands.

However, if any piece of Tiangong-1 were to crash into a person, it wouldn’t be the first time that part of a spacecraft hit someone. In 1997, a small piece of a Delta II rocket struck Lottie Williams, a resident of Tulsa, Oklahoma, on the shoulder, according to NPR. Luckily, Williams wasn’t injured, and she remains the only person on record to be hit with a piece of human-made space debris.

That’s not to say space gear doesn’t come crashing down to Earth. Over the past 50 years, more than 5,900 tons (5,400 metric tons) of space debris has survived re-entry into Earth’s atmosphere, but no incidents — except for Williams’ — have been reported, Aerospace Corporation said.

One note: The components of these vehicles can be toxic, corrosive, or present other potential hazards. In the event our friends in Michigan find debris after the crash, they should contact their local emergency response personnel.

One can only hope. It has now been 2,300 days since That Team Up North beat OSU. Go Buckeyes!

Unless it hits Detroit, where the debris field will blend right in with the local landscape.

What goes up (and does not go up past a 1,200 mile orbit), must come down. And sometimes makes a darned good TV series.

“Unless it hits Detroit, where the debris field will blend right in with the local landscape.”

BOOM! GMTA. I had a similar thought when I first saw the headline.

However, I’m unclear as to why the mercator debris field projection highlights the yellow bands as more probable crash sites.

The oceans are more vast than the land mass, so I pray the wreckage will end up there.

However, I’m unclear as to why the mercator debris field projection highlights the yellow bands as more probable crash sites.

My (un)educated guess: look at the ground tracks shown on the map. They all converge and cross over each other in the yellow areas, meaning the station spends more time above those areas of the Earth, which means those areas have a slightly higher probability of being where it comes down. Probably not a greatly increased risk, but higher all the same.

Or, maybe the map maker just wanted to use his yellow highlighter. 🙂

The station’s orbit is circular, or most likely ovular as the apogee and perigee are usually not the same. However, the earth is tilted 23.5 degrees underneath the ecliptic plane of the station’s orbit. That’s why it makes that zig zag appearance on a non-tilted, flattened map. The perigee (lowest point of the orbit) must correspond with the those particular latitudes. The lower the orbit the more atmospheric particles it encounters, slowing it down. Thus, higher probability to reenter at that latitude.

Well, not really. Any orbit (circular, elliptical, parabolic, or hyperbolic—that’s all of them) can be put in any position relative to the planet, as long as one focus is at the Earth’s center. So the inclination of the orbit can be anything from zero (dead above the equator) to ninety degrees (crossing above both poles). Mapped on the Earth, circular and elliptical orbits will appear as sinusoids. This is due to the earth’s rotation, as well as the orbiter’s trajectory. The Earth’s orbital inclination doesn’t matter—that determines the path the sun seems to move along, but has nothing to do with any other object.

West-to-east orbits are by far the cheapest, because the Earth (including the launch site) is already moving in that direction. Cape Canaveral is moving about a thousand MPH already, and that’s a thousand MPH less that the booster has to add to a payload to put it in orbit. Communications satellites work much better if they’re in a geosynchronous orbit, one which positions them in one spot on the map. That’s done by putting it dead over the equator in a circular orbit 22,000-odd miles up; the orbit then takes exactly 24 hours, which tracks the Earth’s rotation. They like polar orbits for generic spy satellites; those will see all of the planet eventually, from pole to pole. No other orbit will do this. (Polar orbits are the only ones I ever dealt with in my official Rocket Scientist days—military stuff.)

It’s all easier with pictures.

Correct, an object can be put into any of those orbits with any inclination. I was incorrect that the sinusoidal shape of the orbit on a mercator map is due to the Earth’s tilt. That is the reason for the daylight and darkness having a sinusoid shape. If the orbit of a satellite was on the solar system’s ecliptic plane though, it would travel like that around the earth due to the tilt. But for the most likely region to reenter being roughly 40N and 40S, wouldn’t that latitude have to be the lowest point of the orbit?

A Legal question for one of the many astute Laywers here on LI. If someone is either hurt physically or suffers loss due to falling debris (loses their house/car etc), would China be liable for damages? Could they even sue China if they are for example a US citizen / resident?
Maybe Elon should have hit the Chinese station with his car? 🙂

I’m gonna go out on a limb here and say that even if persons can’t sue China for losses/damages, there will be a number of class-action lawsuits (advertised by attorneys on late-night television) based on mental anguish caused by the deorbiting.

Make that “…attorneys on late-night television and Gloria Allred…”

if AllRed is involved, take my name off.

LOL Gloria Allred. (Show me where the bad space station touched you)!
Man sued for having improper relations with an underage space station. (The Tiangong 1, at 7 years old is a victim of being forced to go down to an earth estimated at 4.3b years old).
#whydidithavetobeme?

This would be a good target for anti-sat or anti-balilistic missile systems. Break it up into smaller pieces that wouldn’t survive reentry.

That actually could make it worse.

“Anti-satellite missile tests, especially ones involving kinetic kill vehicles as in this case, contribute to the formation of orbital space debris which can remain in orbit for many years and could interfere with future space activity (Kessler Syndrome).[6] This event was the largest recorded creation of space debris in history with more than 2,000 pieces of trackable size (golf ball size and larger) officially cataloged in the immediate aftermath, and an estimated 150,000 debris particles.[24][25] As of October 2016, a total of 3,438 pieces of debris had been detected, with 571 decayed and 2,867 still in orbit nine years after the incident.[26]

“They represent more than half of the tracked debris orbit the Earth with a mean altitude above 850 kilometres (530 mi), so they would likely remain in orbit for decades or centuries.[27] Based on 2009 and 2013 calculations of solar flux, the NASA Orbital Debris Program Office estimated that around 30% of the larger-than-10 centimetres (3.9 in) debris would still be in orbit in 2035.[28]

“In April 2011, debris from the Chinese test passed 6 km away from the International Space Station.[29]”

Is Detroit bidding on being the crash site? The subsequent cleanup would be 21st century urban renewal.

BEEP. “Ding Dong the Witch Is Dead! The wicked witch is dead!”

Pyongyang would be another good one.

Congress would be better.

Put a tariff on imports—like, say, dumped aerospace scrap—and we’ll find that the Chinese will magically be able to drop it in the ocean.

If it hits my property I’m keeping it.

Maybe it will hit a Walmart.

If it hits Detroit it’s more likely that it’d do about $10 in improvements.

I have a list of places I would prefer that it hit, both foreign and domestic. Michigan is not high on that list.

Since even the day of re-entry is not yet known, the “prediction” appears to be that the satellite (the larger, denser pieces of it anyway) will land somewhere underneath the path of the satellite.

The orbit’s not perfectly circular, but it’s eccentricity is small. It obviously can’t land anywhere that’s farther north or south than 42.7°, but, other than that, is there any reason to suppose anyone can predict where it’s more or less likely to land?

“Theoretically, if the vehicle crashes into a populated area, a lot of damage could occur. Unless it hits Detroit, where the debris field will blend right in with the local landscape…”

According to the 2010 census Detroit is 83 percent Black or African American.

I blame Detroit’s last Republican mayor, who left office in January 1962. And of course Donald Trump and the NRA.