Walmart Kicks Cosmo Out of the Checkout Line, Restricts to Magazine Rack

Walmart Kicks Cosmo Out of the Checkout Line, Restricts to Magazine Rack

The culture war is made up of many small battles and this is a victory in this right direction. 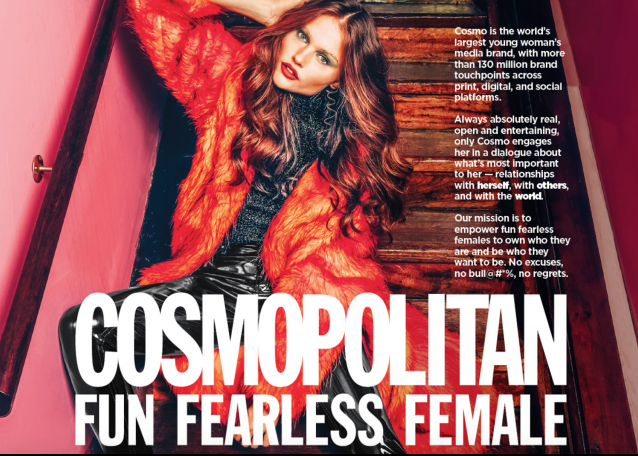 It’s about time Cosmo was treated like the trashy rag it is.

Mega-retailer Walmart has agreed to restrict Cosmopolitan magazine to the periodical racks. Up until the agreement, which was made public Tuesday, Cosmo could be found in checkout lines.

From the National Center on Sexual Exploitation:

After collaborative dialogue with NCOSE, Walmart will remove Cosmopolitan magazine from checkout lines at 5,000 stores across the country. Protecting minors from the sexually explicit material that Cosmopolitan embodies and perpetuates has been a long-time priority of NCOSE.

“This is what real change looks like in our #MeToo culture, and NCOSE is proud to work with a major corporation like Walmart to combat sexually exploitative influences in our society. Women, men, and children are bombarded daily with sexually objectifying and explicit materials, not only online, but in the checkout line at the store,” said Dawn Hawkins, Executive Director at the National Center on Sexual Exploitation.

“Walmart’s removal of Cosmo from checkout lines is an incremental but significant step toward creating a culture where women and girls are valued as whole persons, rather than as sexual objects. We are grateful for Walmart’s cooperation and for Walmart leadership’s recognition that corporations must do their part to change #MeToo culture.”

The National Center On Sexual Exploitation credits Walmart’s acquiescence as the fruit of the #MeToo harvest. Buuuuut, I disagree.

#MeToo highlighted sexual abuse among the rich and powerful, and worse, the industries that actively covered for abusers. As we discussed at length, #MeToo turned into a movement that sought to paint every man as a would-be predator, while allowing consenting adult women who crossed sexual boundaries with which they were uncomfortable to blame men for their poor decisions. Those are distinctly different outcomes from a magazine’s placement introducing graphic sexual acts to children.

Where there is congruence though — both Cosmo and #MeToo objectify men and women, and as objectification implies, treat people as objects of emotional projection rather than emotional beings.

All of that to say, I’m glad someone (whether it’s for corporate feel goodness or pure intentions, I don’t care) is taking a small step to protect our children from over-sexualization. The culture war is made up of many small battles and this is a victory in this right direction.

It’s still in the checkout line at the local supermarket. Yes, this is a win but it’s a very very small one.

‘The Ignorant Slut Handbook’ is right up there with ‘People.’

I can see you drooling every time your on line. How embarrassing.

Stay away from your sister.

A brutal rumor is that his sister is a transexual Beta gender loser.

“Cosmo sends the same messages about female sexuality as Playboy. It places women’s value primarily on their ability to sexually satisfy a man and therefore plays into the same culture where men view and treat women as inanimate sex objects.

I agree that Cosmo has become far too raunchy for display in checkout lines; indeed, I’d probably agree that Cosmo is a poor model for women to aspire to. But, This description is nonsense.

Cosmo is not about men’s use (or abuse) of women, it’s about women’s use of their sexuality to get what women want to get from it. And no, it’s not really a magazine for men flying a false flag, as it’s full of ads for products for women.

Nor is it Playboy (or even the gender-reversed image of Playboy, as men and women don’t approach sex in the same ways or necessarily want to get the same things from it).

It is (and continues to be) a magazine for women.

“…a magazine for women.”

Yes, it’s a magazine for women, by women, instructing women how to submit themselves to abuse.

Too bad they never submit to you.

This is a small step towards making ordinary shopping less offensive. Really, I’ve been married 46 years and I’m not a prude, but some things used to be considered private. We can hope that supermarket chains will also begin moving this type of material to the “available but not on display” category.

Agreed. When I was younger and still trying to figure out women, magazines like Vogue and Cosmopolitan were ones I researched. You can assume the ads are marketed toward women and what they want so if you want to learn what women are interested in you study the advertisements.

Are you saying that you have women figured out now?

Judging solely from that four-paragraph snippet above, I’d say that of the two, the National Center on Sexual Exploitation or Cosmo, I’d consider Cosmo the less offensive. What a load of self-serving, left-wing twaddle. No, sorry, I don’t support censorship, not even of vile silliness like Cosmo, and I don’t support harassment tactics either. Trashy magazines belong on the trashy magazine rack. I categorically reject the assumed right of self-appointed righteous busybodies to tell anyone else that the magazines they don’t like must be moved to some other trashy magazine rack. It’s none of their goddam business, and it’s up to society to tell them so.

I wonder where they’re stocking Teen Vogue and their recent article”Anal Sex: What You Need to Know”

Worth seeing the link.

1 -“Yes, you will come in contact with some fecal matter.”
2- They feature a teenage girl with a mustache.

“Are you saying that you have women figured out now?”

Lol. Yes, although not much good it does me now (married 18 yrs).

Plus they made me sign a plethora of NDAs.

So sorry, you’re on your own. Good luck.