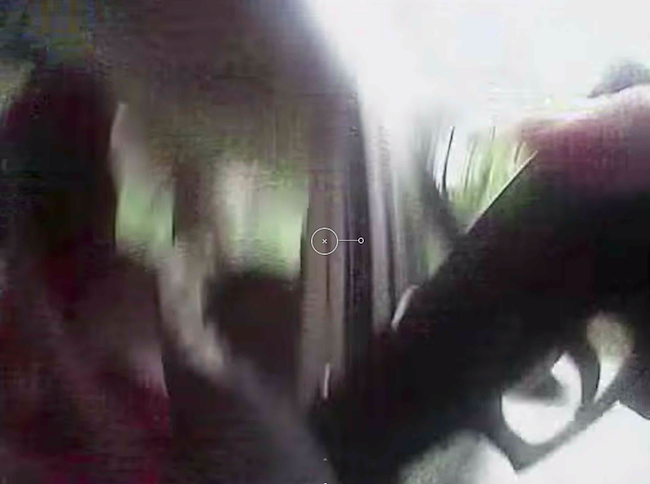 Today the University of Cincinnati announced that it would settle a grievance brought by former UC police officer Ray Tensing by paying him almost $250,000 in back pay and $100,000 in legal fees he incurred, reports NBC and other sources.

On July 19, 2015, (then) Officer Tensing (who is white) shot and killed Sam DuBose (who is black) in the course of a traffic stop in which DuBose began to drive away from the stop with Tensing’s arm inside his vehicle. The events were captured on Tensing’s body camera. Tensing would claim he killed DuBose in self-defense.

The case occurred in the midst of the #BlackLivesMatter hysteria, however, and within 10 days of the shooting (a remarkably brief period) Prosecutor Joe Deters announced that he had obtained a murder indictment against Tensing.

I previously covered these events, including analysis of the body camera footage, right here at Legal Insurrection in this post: Sam DuBose Shooting: Let’s Go to the Video Tape.

At that point Deters threw up his hands, declined to re-try Tensing a third time, and forwarded his files to the Department of Justice, which also took no action to bring Tensing to trial. We covered this, as well here at Legal Insurrection, in this post: No Third Trial for Cincinnati Officer Ray Tensing in Sam DuBose Shooting.

It is obvious that Tensing’s legal fees for two separate murder trials must have vastly exceeded the $100,000 in legal fee reimbursement he is receiving as part of the settlement, unless much of his legal expenses were covered by third-parties.

Nevertheless, a settlement of nearly $350,000 to an officer twice put before juries on a charge of murder, where both trials hung, in the state with the burden of proof on self-defense most favorable to the prosecution, is a clear demonstration of how weak that charge of murder proved to be.

Criminal Law, Law of Self Defense

Andrew,
Since you raised the issue of legal fees, can you give an idea of what legal fees one can expect to defend oneself in a justifiable self defense case that goes to court? I assume it would vary, but I would be interested in some kind of minimum and an average range (if such exists).
Thanks

Don’t forget that in this case he had to defend himself TWICE.

Criminal defense attorneys that defend murder cases that I know tell me that they expect about 1,000 hours of attorney time to get through a trial. There are expenses to consider as well, such as hiring investigators, which is absolutely necessary, experts, perhaps travel and lodging (to interview witnesses, perhaps take depos, meet with experts and other advising attorneys, and if there is a change in venue), exhibits and demonstrative evidence, and various filing fees, subpoenas, and fees for production of and copying of documents.

It is easy to spend $10,000 on investigators, and $10-50K is not unusual, depending on the complexity of the case, number of potential witnesses, and the cooperative or adverse posture of witnesses. It is not hard to spend $50k-75K on one expert, depending on the complexity and hourly rate. A lot of them want to bill like attorneys at $250/hr and up. Doing reconstruction and emulation of events through experts as part of the demonstrative evidence makes it more expensive.

Criminal defense attorneys commonly take a major case on a flat fee based on the estimate of the factors I mention above, with an imputed or target hourly rate. A lot of times they take less significant cases on a flat fee base as well, and are different from civil litigation attorneys in that respect. A private sector defense attorney that is capital qualified would likely bill somewhere between $250/hr and $1,000/hr, depending on the market and the experience/reputation of the attorney. Sometimes attorneys will cut imputed hourly rate to get the case because it interests them and for the attention, self-promotion, and experience that come with it. Sometimes investigators and experts will work with them on rates and take a reduced flat fee up front as well.

It would be hard for me to imagine that competent private sector lawyers could try a murder case for the first time for less than $350,000 if everything is billed and everyone gets paid the standard rates.

Reduced to its essence, just being unjustly tried is a severe punishment likely to bankrupt someone.

OleDirtyBarrister ,
Thanks. It’s frightening how expensive innocence is.

Are we now to assume there are two sets of laws in Ohio? Is the “chicken sh*&” defense an acceptable new type of plea? Apparently the DA thinks so.

I was utterly unaware that in Ohio the burden of proof for self defense is on the defense. That’s a shame. I wonder what residents would have to do to get the General Assembly and Governor to change that.

There are bills in Committee in both House and Senate right now to introduce Stand Your Ground, Self-Defense Immunity, and shift the burden of proof.

HB 201 and Senate Bill 180. Call and write your Legislators.

Is Ohio a SYG state, if not that would be the place to start, with a provision rescinding the current law.

From the WLWT5 link

The University of Cincinnati previously paid out the DuBose family. That settlement was $4.8 million.

It seemed like a large award, but then he(Sam DuBose) had a large family. They all got paid, even though the legal case against Ray Tensig was weak. SOP.

The settlements are paid fairly quickly try to avoid a riot.

Read the article in the link below for insight into how it works. If the right people can wet their beaks, they can prevent a riot. Otherwise, those people can assemble the useful idiots to make things burn until they get what they want.

By the way, that is Johnny Cochran’s firm that was a defendant in the article in the link.

Riot threats as extortion, or just for looting should be met with deadly force. For quite a long time I have thought that those using Molotov cocktails should be shot immediately after lighting them.

Going ahead, we should let them riot. After a few riots are put down, there will be much fewer riots or ghetto lottery bids.

Why on earth would his siblings be awarded $32,000 each? And awards to the parents are similarly silly.

It is interesting that the defense video analyst was able to determine Tensing landed 25 feet up the road from the shooting point near a manhole cover , but no one could figure out that Dubose’s car took him there.

The only sound that is important in these cases is the cha-ching of the cash register for the “families” of the miscreants who get shot by police. These prosecutions are never about “justice” only about the money. Injury attorneys have to secure an indictment or the filing of criminal charges to facilitate their recovery of “damages”. They do not even care if the person charged is convicted, because they get their pound of flesh upfront. Ever notice that these civil damage suits are almost always settled long before the alleged perpetrator is convicted of anything? What a racket. It is nice to see the truly aggrieved get some compensation for being put through this legal money machine.