Numerous polls show Trump approval rising, and not far off from Obama and Reagan at similar points in their first terms

At one level, nothing has changed about Trump. He still stirs the pot on Twitter, the staffing changes continue, and the sense of turmoil never seems to leave.

Certainly, #TheResistance against Trump has not changed. If anything, the opposition to Trump has gone from foaming at the mouth to … Exorcist-like goo bursting head spins. And that’s just CNN.

But something has changed in Trump’s favor. Recent polling consistently shows a meaningful uptick in Trump’s job approval.

This RCP chart shows a steady improvement since the end of 2017: 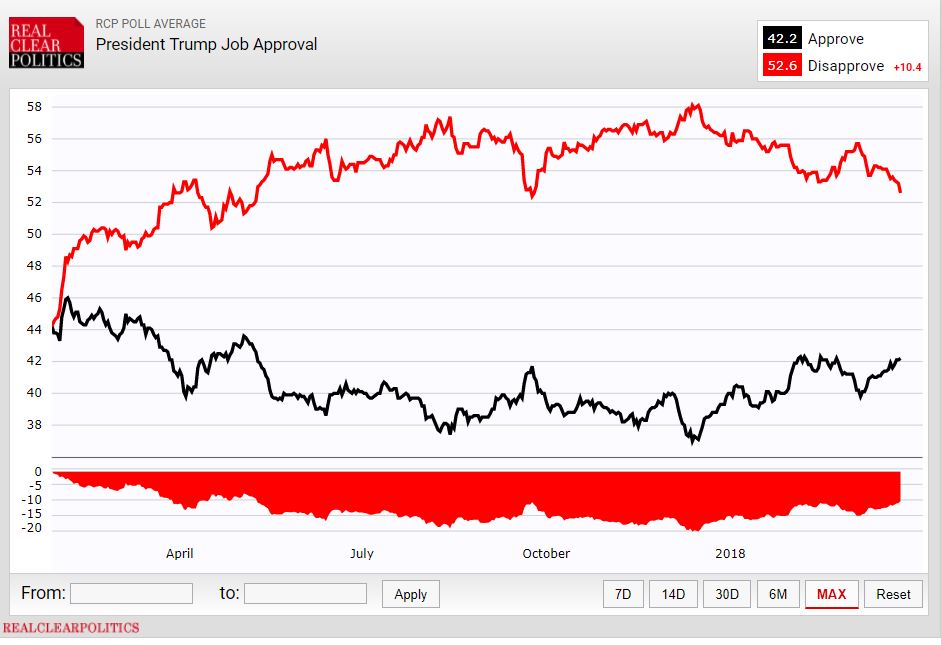 A 42% approval rating may not seem like much, but as CNN notes, that’s not far off where Obama and Reagan were at similar points in their first term:

Overall, 42% approve of the way Trump is handling the presidency, 54% disapprove. Approval is up 7 points overall since February, including 6-point increases among Republicans (from 80% to 86% now) and independents (from 35% to 41% now). Trump’s approval rating remains below that of all of his modern-era predecessors at this stage in their first term after being elected, though Trump only trails Ronald Reagan and Barack Obama by a narrow 4 points at this point in their first terms.

These charts from 538 show the Obama and Reagan approval ratings at similar times, each of whom was under 50%: 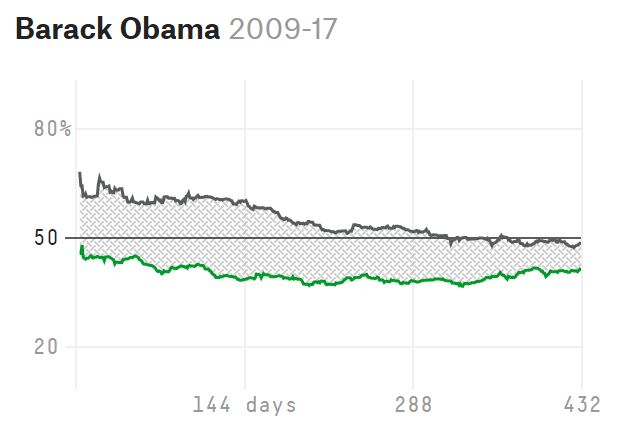 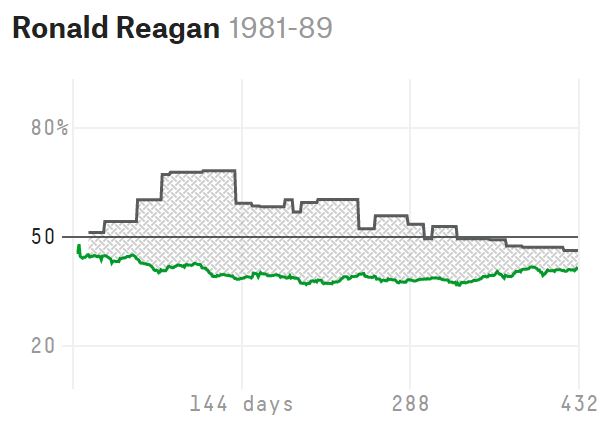 This rise, CNN notes, is despite almost 2/3 of people believing the Stormy Daniels and similar accusations of affairs:

Almost two-thirds of Americans say they believe the women alleging affairs with Trump over the president (63% say so), while just 21% say they believe Trump’s denials of those affairs. And about half (51%) say the two women pursuing lawsuits seeking to free themselves from non-disclosure agreements relating to any relationship they may have had with Trump ought to be free to discuss those alleged relationships.

There are party and gender divides on both questions. Women are more apt than men to say they believe the women claiming affairs (70% to 54%) and that holds even among those who are Republicans or lean toward the Republican party (45% of women who consider themselves GOP or lean that way say they believe the women compared with just 25% of GOP and GOP-leaning men). Democrats are far more apt than Republicans to say the women should be free from their NDAs (78% among Democrats, 49% among independents and 25% among Republicans say so), and while women break in favor of allowing the women to discuss their relationships (59% say they should be free to discuss them, 34% say that the agreements should remain in place), men tilt the opposite way (48% say the agreements should hold and 43% say that they should be free to discuss their relationships).

So what’s going on? The conventional wisdom is that Trump’s approval ratings rise thanks to economy, tax overhaul.

It makes sense that the economy and tax plan have helped. But it must be more than that. Perhaps the larger public has tired of the anti-Trump insanity. Perhaps Trump Derangement Syndrome has run its political usefulness.

notamemberofanyorganizedpolicital in reply to DINORightMarie. | March 27, 2018 at 11:08 pm

Sane Americans have had their fill of the EVIL MSM and Never-Trumpers (nee Ever-Rumpers) and dictatorship worshiping Democrats for months and months now.

All the opponents to Trump are lower than John Wayne Gacy.

Despite the fact that there were credible rape accusations against him

Most virile men could understand why Bill had to look elsewhere.

The secret life of an engineer…

It’s because he’s orange, right? The diversitists still hope to lynch him, but the people are awake to their progress.

Or maybe people just don’t much care about a 10 year old affair and that his positions – the ones he ran on – are still resonating with the American People who actually see some hope again.

Crying wolf won’t work forever, but there is little else for the detractors to turn to. Their policies are bankrupt and there is a gnawing that history will expose the corruption of their prophets.

They like to believe they are the smart ones. Perhaps, but quite inept except when it comes to their constructs. If they cop to reality, they must acknowledge they are not smart, and maybe have been wrong all along.

In that vein, they have nothing more to do than resist, and in the end may they become a parody.

How fast things changed under Trump, home and abroad, which has revealed how ineffective Obama was across the board, and how misguided.

Imagine how much better it might have been if even a few had worked with Trump, and maybe some still will.

For $130K, he could have done a LOT better. He was probably just cutting her some slack.

Twelve years ago she might have been a lot better!

The left, and the legacy media, live in constant fear that something good will happen.

…and its ins and outs.

(Hey, somebody had to say it)

At its core, The Resistance exists because of the liberals starting to believe their own lies about conservatives.

Liberals practically soiled themselves at the mention of Obama’s name, and tried to cast every objection to an Obama policy as RACIST DOG WHISTLE and hatred of Obama. They refused to acknowledge that just maybe conservatives didn’t like his policies. So they convinced themselves that the ‘obstructionists’ were only blocking things because they hated Obama.

It’s the final stage of believing your own bullshit.

Liberals practically soiled themselves at the mention of Obama’s name, and tried to cast every objection to an Obama policy as RACIST DOG WHISTLE and hatred of Obama. They refused to acknowledge that just maybe conservatives didn’t like his policies. So they convinced themselves that the ‘obstructionists’ were only blocking things because they hated Obama.

That’s really the only game the liberals have; exploiting “victim” status. It goes like this: Pick someone with the “correct” skin color, ethnic background, gender, back-story, etc., and set him/her up as an unassailable “victim” figurehead. Then, anyone who argues against his/her ideas can be painted and dismissed as a bigoted hatey-hater who just hates him/her personally.

And that’s the way the whole charade is designed. The messaging is recycled, the networks and financiers are already in place; they just need a crisis and sympathetic victim(s) to spring into action.

(Who seriously believes a couple of high-schoolers could: a. gather millions of dollars in finances; b. reach out to celebrities for endorsements; c. set up websites, Faceb**k and Tw*tter accounts; d. hire bigwig tax consultants from California; e. submit paperwork for 501(c)(4) non-profit tax status [incorporated in Delaware]; and f. organize nation-wide networks and marches — all inside of a MONTH — and still have time to give endless speeches, interviews, and appearances with the media?)

It’s the only game the Left plays these days (besides simple lying), but they play it very well. The kids are just pawns. The real question is: who are the players? Follow the money.

But it always was counterproductive.

Conversely, looking at T-rump objectively and critiquing him as appropriate was…and still is…the conservative thing to do.

It was, is and will be tomorrow.

The black baby Jesus’s approval was high bin spite of the fact that, much like his entire life, he had actually achieved nothing.

I wonder how the numbers compare between advertised conservative sites like National Review if you look at their pre and post nevertrumper moves? Did their click or link-to numbers go up or down?

Lol. What junk. More like 600 Americans out of the 1000 that care to respond to your stupid polls.

Ms. Daniels should be allowed to vacate any non-disclosure agreement she claims she didn’t sign, or that never existed (I can’t recollect which is the current story).

If I were Trump I’d release her from the obligation to keep silent just as soon as she returns the $130,000.00 in cash, or as soon as the check clears processing and the money is in which ever Trump account is desired.

As I’m sure she doesn’t have the cash, let’s see what her NeverTrump/Democrat backers think having her spouting her story is actually worth. I suspect it won’t be $130,000.00.

Agree to release her and the other individuals from her NDA, if she and they all agree to pay the maximum of the liquidated damages clauses FIRST (either personally, or from 3rd parties), in the same release document the statement makers and any person paying for the Liquidated Damages release above agree to waive any procedural or other protection (NYT v. Sullivan or other) from a cross-libel suit due to President Trump being a public figure, AND that ANY fees either personally earned or otherwise in any way RELATED to the release by the individual from a non-disclosure are required to go to the Wounded Warrior project. Meaning basically any book or interview royalties FOREVER for these individuals.

[sarcasm]I’m sure that there is SOME liberal out there that is willing to fund that.[/sarcasm]

My guess is that these claimants go slinking back into the dark without so much as a peep.

Hey, RCP: Don’t think we didn’t notice the non-zeroed axis of your “approval” graph. Only showing the top 1/3 makes the 12-point difference look like a 50-point difference, but the real approval/disapproval numbers are much closer to 50/50 than your cute little chart portrays.

And you guys wonder why nobody believes pollsters anymore….

That’s actually standard to show detail. A zoomed-in graph is not particularly dispositive, so long as it’s balanced between the increased detail.

Pet names like “T-rump” tell us you are not objective. And portraying yourself as standing on principle to speak truth to power is mere Virtue Signaling. I can almost hear the voice-over: “In a world that has lost its mind – one man stands alone, persecuted and hunted, he will risk everything to become… The Savior Gotham Deserves (fade out).

And the routine tantrums by the “Resistance” (lol) and NeverTrumpers have only served to immunize President Trump from legitimate criticism.

Dial up David Hogg on YouTube and correlate his public rants with increasing support for and membership in the NRA.

Now consider how attacks like yours do the same for Trump.

Thank you for your time. I’ll be making a donation to Trump 2020 in your name to show my appreciation.

My position on T-rump is entirely objective.

And you cannot refute the predicates on which it is founded, so you go into your typical personal attack mode, the first and last resort of the cultist.

I’ll also note you’ve been such a stinking coward that you’ve never attacked Prof. Jacobson or any of the other LI authors for saying very much the same things as I have regarding T-rump and his administration.

You are quite the hater, Killer.

Can we get a reboot?

Because I think you would look spectacular in purple tights.

Ditch the cloak though. No capes!