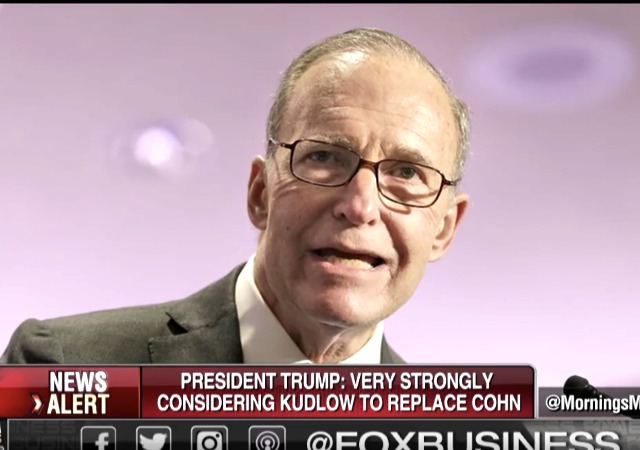 The official announcement could come on Thursday. A source told CNBC that Trump offered Kudlow the job on Tuesday.

Cohn left his post shortly after Trump implemented tariffs on steel and aluminum imports. People speculated Trump would pick someone who agrees with him. They speculated wrong because, like Cohn, Kudlow loves free trade and doesn’t care for tariffs. From The Washington Examiner:

The former Reagan administration economist has spoken with Trump several times since Cohn announced his imminent departure from the West Wing, and previously served as an informal adviser on tax reform when White House aides were crafting a tax plan last fall. Trump himself told reporters on Tuesday he was “very strongly” considering Kudlow for the position, calling him a longtime friend and “very talented man.”

Those lobbying for Kudlow’s selection were pleased to see the president’s comments on Tuesday about his desire for “divergent opinion[s]” inside the Oval Office. A fierce defender of free trade, Kudlow came out against the steel and aluminum tariffs Trump unveiled last week and would likely defend multilateral trade agreements against the president’s protectionist instincts. He is also a seasoned television personality, who could excel as a surrogate for the White House on economic issues.

“We don’t agree on everything but in this case, I think that’s good,” Trump said Tuesday. “I think Larry Kudlow has a good chance. He’s a very, very talented man – a good man.”

Kudlow penned an op-ed with two others to explain why Trump shouldn’t go the tariff route. They wrote that that “steel and aluminum may win in the short term, but steel and aluminum users and consumers will lose.” They rightfully described higher tariffs as “tax hikes.”

He softened a tad after Trump decided to exempt Canada and Mexico from the tariffs while we negotiate NAFTA with them.

As the National Economic Council director, Kudlow will advise Trump “on economic issues” and work “to implement policy goals.” Kudlow supported the GOP tax bill that passed in December. He also helped Trump with taxes and economics during his 2016 presidential campaign.

notamemberofanyorganizedpolicital in reply to MarkSmith. | March 14, 2018 at 3:32 pm

Kudlow is MUCH stronger on market trading than was Cohn.

Someone with a brain got to Duh Donald, is my guess. But Kudlow won’t last long. He’ll find being ignored by the New York Progressive and economic moron too taxing (see what I did there?).

It must be killing you to see all these world-class experts jumping at the chance to work under “da donald”. Seriously, I have never seen more real-world expertise amassed in an administration in my 52 years. “Da donald” must be the luckiest idiot on the planet or maybe, just maybe, you are missing something 😉

Rags is still heartsick that the pantsuit Queen did not ascend her throne. He was looking forward to all the swag he would get from the “party”.

Why do you even attempt such transparent lies?

I hate Hellary, and for the same global reasons I hate Duh Donald. I’ve never had a good word to say about her.

Killing me…??? Not in any sense but laughter.

Who’s a “world-class expert” in the T-rumpian cabinet? I can’t think of any.

I like DeVos. I like Haley who has grown in her job. I liked Perry. Mnnuchkin? No. Deemocrat and Goldman-Sachs boi. Tillerson? No. No experience at all, much less “world-class”.

I really can’t think of any who approach “world-class” AND who are/were champing at the bit to work for Duh Donald. I CAN think of many who declined.

I’m thinking there are a few who serve out of a sense of duty to the nation, and for which I’m grateful. But they’re holding their noses doing it.

Kind of pathetic to consider Kudlow a world class anything, other than a world class bootlicker. We need strong economic leadership and Kudlow is not it. Unless you believe Trump’s bragging about what a stable genius he is.

I personally like Kudlow watching him on CNBC and listening to his radio show. Like the weatherman and other economists, he has occasionally been right in his forecasts, and occasionally wrong. Nothing unusual about that. His instincts toward free markets are encouraging. We’ll see if he can convince Trump to temper some of his long held beliefs on tariffs and trade. Hopefully he has the fortitude to stay in this role for Trump’s full term.

Kudlow is a good man on economics. He has a history of being very outspoken. How long will he be able to muzzle his instincts when he disagrees with the boss?

Simple. Don’t disagree. The goal is FAIR TRADE! Not “dump your overage here tariff free”. When Germany charges a 32% tariff on U.S. made cars and we impose NO TARIFF, then that is not “fair”. And while LIFE IS NOT FAIR, trade can be. WHEN the tariff hits BMW and Mercedes, then Americans can buy Ford or GM or PAY THE TARIFF!

OR they can say “Skeeeeerooooo YOU, Donny”. And support someone who supports market economics instead of fascist economics!

Also, ya boob, all consumers pay a higher price across the board, as the price of the tariffed inputs rise to nearly the same level as the tariff. EVERY car sold in American will be more expensive.

We’ll have to see how Larry Kudlow works out. He is infamous for his prediction of no recession in 2008 [which we are only now recovering from]. I have no problem with his adversity to tariffs. He is correct when he says that steel and aluminum tariffs will increase the production costs of manufacturers who use those commodities. We’ll have to see how long these tariffs last and their long term effects on the whole economy.

Kudlow has always been a stock market/finance guy. I do not know how much he knows about macroeconomics. I guess we’ll find out.

Sure, free trade after compensating for labor, environmental, and monetary arbitrage. Free trade is dysfunctional in markets where there are monopolies or practices.