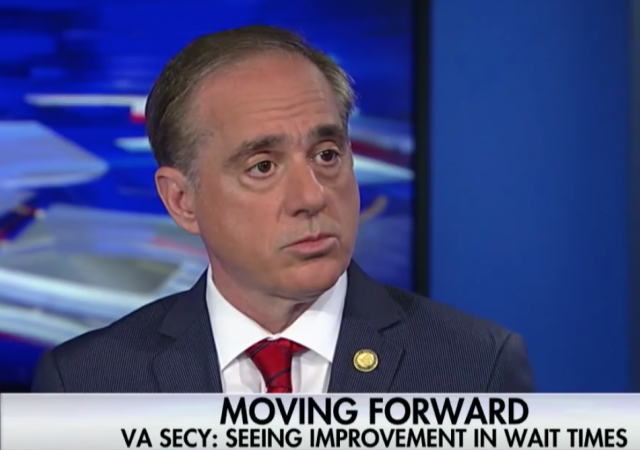 Took long enough, but the scandal-plagued Veterans Administration will be under new management soon. Wednesday, Trump announced via Twitter, his plans to install a new VA Secretary.

I am pleased to announce that I intend to nominate highly respected Admiral Ronny L. Jackson, MD, as the new Secretary of Veterans Affairs….

….In the interim, Hon. Robert Wilkie of DOD will serve as Acting Secretary. I am thankful for Dr. David Shulkin’s service to our country and to our GREAT VETERANS!

According to several reports, Trump was furious over a trip Shulkin and his wife took to Europe, a trip that cost upwards of $120K and ultimately cost Shulkin his job.

Politico has the details:

Shulkin, 58, led the Veterans Health Administration for two years under Obama, and was confirmed as Trump‘s nominee to head the VA on a 99-0 Senate vote. Veterans groups and congressional leaders from both parties have praised his efforts to increase accountability, improve health care and overhaul the agency’s IT infrastructure.

But his tenure took a sour turn on Feb. 14 when the VA inspector-general reported that Shulkin and his wife had improperly accepted Wimbledon tickets and used staff to arrange site-seeing visits during a business trip to Denmark and England last summer.

Although Shulkin repaid the money in question, foes in the White House and the VA, loosely allied with the Koch brothers-funded Concerned Veterans of America, used the opportunity to press for his removal.

Shulkin responded in a series of interviews with POLITICO and other news outlets that there was “subversion” against him and his mission.

Some members of Congress and veterans groups agreed. But Trump, a regular viewer of Fox & Friends commentator Pete Hegseth — a critic of Shulkin who once vied for his job— reportedly was irked by Shulkin’s claims that he had full White House support.

From a policy perspective, the fight centered around two versions of a bill to give veterans greater access to private health care. A bill championed by Sen. Jerry Moran and supported by the Koch-backed group would allow veterans to choose care as they please outside of the VA system, which critics say amounts to privatizing the VA system while taxpayers foot the bill.

Shulkin, with the support of veterans groups like the American Legion and Veterans of Foreign Wars, supported a bipartisan bill that gave VA physicians the ultimate control over when veterans could go out of the system. Neither bill was included in the fiscal year 2018 omnibus budget, and by late March, senators were still negotiating over them.

Shulkin repeatedly said he would never oversee the privatization of the VA, the only large government-run health care system in the United States. Veterans groups and some Democrats on House and Senate veterans committees, viewed the attacks on Shulkin as an effort to remove barriers to privatization.

I recently signed up for VA benefits; I say “recently” but the process has taken many months. It’s like being back in the Army again. All I wanted were some cheap hearing aids and, not being able to afford $5,000 at the local Miracle-Ear store, I thought I would try the VA. Heck, they took 2 years and 7 months of my life, so they owe me, right? I don’t want to seem ungrateful but I’m almost six months into this process and still don’t have them.

After “signing up” online, it turned out that I had to present myself and my DD 214 at the closest VA hospital, about a 90 minute drive away. I drove there and got shuffled from one office to another but finally got officially signed up for benefits. After they took my photo, the nice lady sent me down to the audiology department where I was told that the soonest appointment for a hearing test was 3 months away. The good news was that since the wait was so long, they would authorize me to see a local audiologist. “Veterans Choice” they call it.

Great! (or so I thought). After several letters and phone calls, it turned out that there were zero audiologists in my local area which would accept VA patients. So ultimately I had to drive 90 minutes to a distant town for the hearing test. The hearing test took about 30 minutes and the nice audiologist said my hearing sucked and she would sent my test results to the VA and they would send her the hearing aids. Three days after the appointment, I got a letter from the VA informing me of the appointment. A little late there, guys…

Like I said, I don’t mean to seem ungrateful because everyone I’ve dealt with has been very cordial, but their system could really use some improvements. Here I am close to six months into this process and I still have no idea when I’ll get the hearing aids or what they will cost me.

I feel like I’m whining but, man, I can see why vets are bitching about the delays in getting treatment.

Welcome to the party. I applied for my VA benefits in March of 2004. I got partial benefits, but it’s been a long drawn out fight to get the rest. To the point I had to hire lawyers to help me. Just the fact that there is even one law firm with the name Legal Help for Veterans should tell everyone how screwed up the system is. After my last denial, I receiver 8 or 9 letters from different firms that only work with veterans.

My VA ID card has a magnetic strip on the back. There should be a way that that card could be used at any doctors office or hospital in the country. I’m lucky that I have a VA hospital here where I live, but some aren’t that luck and have a long drive for care. I’m also very lucky that I have always received excellent care at the VA here in Des Moines. Not like some of the horror stories I’ve heard about other VA hospitals.

I googled VA hearing aids a while back and I think there are restrictions concerning who is eligible for them.

Don’t think they are available to every vet – maybe have to have a disability or something like that?

I was around Navy Jets for 4 years (and they were loud) and my hearing is getting kinda crappy although that could be because I listened to Led Zeppelen at high volume with ear phones for quite a few years while in and after I got out.

I explained to my audiologist that I couldn’t afford $5,000 hearing aids and asked her if she had any idea what the VA was going to charge me. She replied, “I’ve never heard of any vet having to pay for them.” Well, I dunno’, the way I understand that this works is that the VA will send me a bill (if any) later. That might explain why she didn’t know. The vet also advised that there’s a 30 day trial period when the hearing aids arrived and I could turn them in if I didn’t like them. So I guess I’m safe, unless the bill arrives 60 days later.

The question is whether the hearing loss is service connected. I sat on a Navy gun mount for years and had a documented hearing loss then. Now that I am over 60 the loss is becoming severe. I have the hearing aids the government provided and they are okay but others could be better. What truly isn’t right is the support you get for using the hearing aids. Where a private vendor would take time to truly fit the hearing aids, I think the tech fitting me spent less than 5 minutes teaching me how to use them (the bulk of that time was how to insert batteries and clean them). When I am in an auditorium, it is truly painful. When driving with my wife, the background noise is so overbearing that I cannot understand what she is saying. Believe me, not being able to hear what your wife is trying to say is frustrating to both.

My other beef is that when the VA billed my insurance company back for some charges, they committed fraud. One of the hearing aids lost the rubber ‘tulip’ that fits in my ear when I removed the hearing aid. It had become lodged in my ear canal and I had to go to the VA ER here in Houston and they couldn’t do anything, except make an appointment for the next week to come back in to have it removed. I showed up, went into examining room and the tech used forceps to remove it. The VA then charges my insurance company for use of an operating room, not one charge but two. They lack integrity and like virginity, once you lose it, you cannot get it back.

When driving with my wife, the background noise is so overbearing that I cannot understand what she is saying. Believe me, not being able to hear what your wife is trying to say is frustrating to both.

Ha, there is a reason men lose their hearing.

The VA should be dissolved, and each vet given private insurance vouchers: they’d get better care, and on their own terms.

ALL Obama appointees need to be booted. At best they are not competent, and many are corrupt or promoting an agenda which is not in America’s interest.

Not to worry, Netflix will hire all booted Obama appointees…

Will Shulkin’s replacement move to have people at the VA prosecuted for fraud, reckless endangerment, malfeasance, etc?

If not, he’s the wrong choice. As Shulkin was.

“Shulkin repeatedly said he would never oversee the privatization of the VA, the only large government-run health care system in the United States.”

Obviously, this guy has never heard of the Bureau of Indian Affairs, MediCare, or Obamacare. Meanwhile, there’s the scandal of Vets who die in waiting rooms while on waiting lists.

Shulkin is a pathetic human being and was a disgrace as SoVA.

“Shulkin repeatedly said he would never oversee the privatization of the VA, the only large government-run health care system in the United States.”

Is that true? I thought Indian Health services was government run too? Or is it not considered Large Enough?

The Indian Health Service (IHS), an agency within the Department of Health and Human Services, is responsible for providing federal health services to American Indians and Alaska Natives.

Sorry locomotivebreath1901, I posted before I read your thread. At least we are on the same page.

Shulkin needed to go, badly. But the new guy is now in a no-win situation. The idea that we just need “the best men” to fix these government f-ups is a collectivist way of thinking. The solution is to tear the VA down.

The fundamental problem is that our veterans need care. The solution? The marketplace. Get the government out of the business of healthcare as much as possible. Let the vets get care on the general healthcare market. Provide vouchers or some similar payment mechanism and other than that the government should get out of the way.