Search for motive behind Travis Air Force Base attack continues

Search for motive behind Travis Air Force Base attack continues 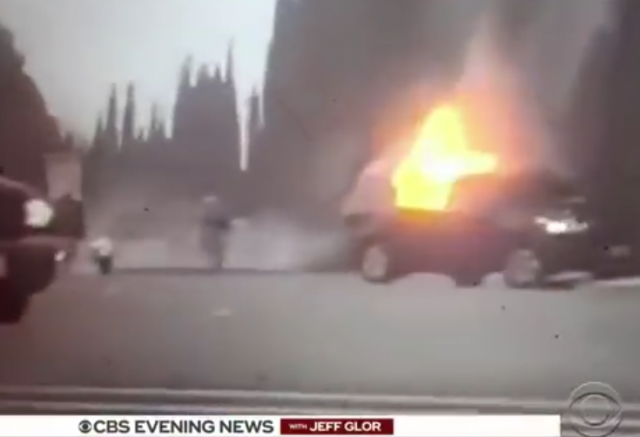 As the news deluge related to President Donald Trump’s signing the Omnibus Bill begins to recede, there are reports of a potential terror attack at an air force facility in California.

The disturbing incident at Travis Air Force Base in Northern California began when a vehicle burst into flames after speeding through the main gate.

The car that breached the perimeter of a California Air Force base before going up in flames Wednesday night was packed with propane tanks that had been intentionally ignited by the driver….

The driver sped through a gate onto Travis Air Force Base — about 50 miles northeast of San Francisco — around 7 p.m. local time, and careened into a ditch, where the car burst into flames, according to CBS News.

The driver, whose identity has yet to be released, died inside the car, apparently from the fire. No other injuries were reported.

The driver has been identified as 51-year-old Hafiz Kazi.

Sources described Kazi as a “nomad” and a “vagabond,” who lived in many places.

Authorities extracted a video from his cell phone and are analyzing it to try and see if it could help point to a motive. Sources wouldn’t offer any details about the video.

The FBI held a press conference Friday at 3:30 p.m. to talk about the incident and the ongoing investigation. During the press conference, officials said the driver had five propane tanks, three phones and several lighters inside, but they have not figured out a motive for the crash and are working to determine why the man approached the gate.

FBI officials indicate that, after a preliminary investigation, they do not believe the incident to be terrorism-related.   However, officials are still mystified as to why Hazi attacked the base.

[FBI agent Sean] Ragan said “we don’t have any nexus to terrorism at this point,” but investigators haven’t determined a motive.

“Why did this individual end up at the front gate of Travis Air Force Base on fire, that’s something we want to know, and the public wants to know,” Ragan said.

This assessment is based, in part, on a review of Kazi’s phone records.

Ragan said Kazi had recently worked as a cabdriver in the San Francisco Bay area. But authorities have yet to determine where he was living.

An initial check of three cellphones found in the vehicle did not turn up any jihadist propaganda, Ragan said.

However, investigators are still stumped in their determination of a potential motive, and the search into Kazi’s contacts is continuing.

Kazi had no known links to terrorism, did not leave behind a manifesto or any threats or explanation, and a video found on a cellphone provided no clue.

…Investigators have interviewed some of Kazi’s acquaintances and are working on some search warrants, he said. They are also scouring social media, so far without result.

Calls to several numbers associated with Kazi were not returned Friday.

Interestingly, Travis Air Force Base handles more cargo and passenger traffic through its airport than any other military air terminal in the United States, and the base has 7,260 active USAF military personnel, 4,250 Air Force Reserve personnel and 3,770 civilians.

I am glad they all are safe, and I hope the FBI can provide a more robust explanation of the motives for this incident.

I guess there is a required minimum of time that must go by for authorities to wonder about motive here. Everyone must act perplexed. Maybe it is the sky high housing/rental prices in San Francisco? You know…”the rent’s too damn high”. One wonders.

“We may never know his true motive”….

His name is Hafiz Kazi. He sped through a secure check point onto a military base with propane tanks on fire. And authorities can’t find the link to terrorism…

These authorities must have Dr. Franklin Robertson on their speed dial. Always good to have experts,

Must be those damn Quakers again.

And here I was, unjustifiably blaming the Amish!

He is obviously a drunken Baptist. A Lutheran would have kept the vehicle on the road.

I’m Catholic too but I can keep it on the bridge.

We need propane tank control regulations at the federal level.

I went to the gas station and bought a five gallon tank of propane, no questions asked.

What the (blank) were they thinking!

Is it harder to buy material for a sign or to get that evil propane? Just because it doesn’t come in a black container doesn’t keep it from being scary.

There is a “search for a motive” when the attacker has a name like “Hafiz Kazi”?

It is a sad commentary that everyone is somehow compelled or inclined to play dumb for a while and not reach the obvious conclusion that it is islamic terrorism.

I can guarantee you that is was not “workplace violence”.

Clearly a white supremacist of the alt right.

I bet his name was Jim Bob McConnell before the name change.

I’m pleased that somebody gave me a thumb’s down.

Three cell phones? No clues? I really wonder what was on the video that provided no clues… I don’t really believe it’s a cute cat video, but it could be.

The motive for the crash was death and destruction, The man approached the gate so he could ram it with a car loaded up with incendiary devices in hopes of causing death of US military personal and destruction at a US military base. Kazi was a criminal and I’m glad he’s not in a hospital somewhere.

Maybe it’s just me, but recent FBI events have me remembering the demystification of the KGB in Munich, 1972.

Guy is actually Japanese, ie, Kim A. Decided to go with Hafiz when he converted to Muslim.

The motive is obvious, he was practicing Islam!

San Francisco had someone named Jehad shoot up a barbershop and no mention was made of him practicing Islam either.

The truth? If we really knew the truth and it was well published, the nation would be in a fearful frenzy. With 8 million or more Muslims now in the country (not counting Quds cells) that leaves a small but potent minority of believers in Islam willing to go lone wolf or more. If 15% or so of believers firmly in the practice active jihad camp .. run the numbers for some of them to go full jihad. The driver may have “sinned” so greatly that the only forgiveness offered to him in his mind is jihad. Modifying a text…”by jihad you are saved, not by grace, lest you boast incorrectly.”

With 8 million or more Muslims now in the country

BS. Not even close. The most recent estimate is from Pew, which puts the number at 3.3M. That’s more likely to be over than under, since the previous best estimates, back in 2001, put it at about 2M.

If so I stand corrected on the number but just reduce jihadist number by that. Still plenty. I stand by his possible resolution of sins with jihad.

The “MythBusters” folks took on the idea of shooting a propane tank (a scene from a Bond film) and making it explode.
In the end, they determined it was harder than most people think to make a propane tank explode.

Just like Las Vegasa, terrorism was ruled out in 48 hours. Speaking of Las Vegas, has anyone heard anything?

The establishment spin: American patriot Hafiz Kazi was on his way to giving the Air Force a surprise bbq, but the Air Force guards were pissed he forgot to bring hot dogs. The guards will be indicted.

Keep this sticky for a while:

Levin: Mitch McConnell should be removed after ‘shocking’ and ‘disgusting’ corruption allegations:
https://www.conservativereview.com/articles/levin-mitch-mcconnell-removed-shocking-disgusting-corruption-allegations/

Destroy the GOPe, and we destroy left.

These are the same guys who missed Nicholas Cruz, the Tsarnaev Brothers, Omar Mateen, Syeed Farook, and Nadal Hassan to name but just a few, and they cant figure out what this guy was up to? Is Buraq Hussein Obama still president? Or is it that just his flunkies are still in charge at DOJ. Mebbe its because they’re still chasing “Muh Russia”?

Here’s a relevant question:
Out of all the people who have attacked a military base since 9/11, how many of them weren’t terror-related?

He was just working a side job that paid 72 virgins.

“ABC’s Islam Deception–Part One: Raisins or Virgins in Paradise?”

Right now, the FBI couldn’t find their backsides with both hands. I don’t find it comforting that they’re in charge.
And, as said above, who needs to determine a motive with a name like “Hafiz Kazi”?! Cheese and crackers they must be dumb … or covering up.

I can’t believe so many people are ready to determine the motive of a crime based entirely on the perpetrator’s name. I shouldn’t have to point out how dumb that is. How do you people even know he was Moslem? Just from his name?! And you seriously want the FBI to reach official conclusions based on that?! Listen to yourselves! Just listen to yourselves! Can’t you hear what you sound like?

I think it comes from the fact that Islam is almost always initially ruled out as a motive, even when they are screaming “Allahu Akbar” or pledging allegiance to ISIS while killing.

It hasn’t been ruled out at all, but there’s no basis yet for ruling it in either. There’s no indication of his shouting anything, or pledging anything. There’s nothing yet to show he was even Moslem in the first place. all this speculation is based entirely on his name, which any normal person immediately understands does not tell us anything at all about his beliefs.

” I shouldn’t have to point out how dumb that is. How do you people even know he was Moslem? Just from his name?”

a Muslim who knows the Koran by heart.”

It’s a rhetorical question, but are you out of your skull?

At best all it means is that his parents hoped he’d be a koran reciter; far more likely they paid no more attention to the name’s meaning than most people do, and perhaps some ancestor was a koran reciter. How do you get from there to speculating about his beliefs?

Ain’t a lot of Saudi Christians naming their kids Hafiz.

Actually, there are no Saudi Christians.

As far as the Saudi government knows.

His parents’ beliefs are irrelevant. People don’t go jihadi because of their ethnic background, they do so out of deep personal belief, and his name cannot shed any light on what he believed.

How many Jews are there left in Yemen?

Milhouse: Your problem is that you always start with the proposition that you are the smartest guy in the room. You are not.

You are instead the biggest poseur on this forum and one of the biggest I’ve seen in the history of existence of internet forums.

The only good thing about the reflexive denial of Islamic motives for terrorist attacks is that it teaches us to not believe anything else the FBI says.

Milhouse: “can’t believe so many people are ready to determine the motive of a crime based entirely on the perpetrator’s name”

Shouldn’t be hard for you to understand – you have a meltdown in the comments once a week so no one here takes you seriously.

Likewise, Mohammed M. Mohammed launches a terrorist almost weekly, in the name of Islam. So no one here takes the clueless FBI seriously.