“sat back down at the window to eat the dead deer” 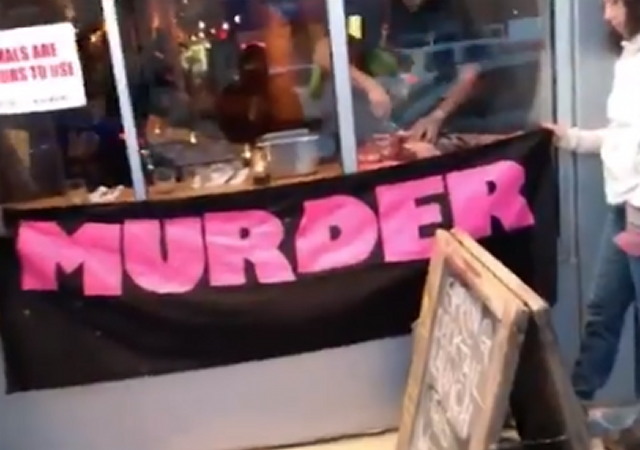 The chef and co-owner of a Toronto restaurant named “Antler” has shown the world a new way to deal with vegan protesters. After days of being bothered by strict vegetarians hanging around outside his establishment, he brought part of a deer carcass to the front window and carved it in front of them.

Animal rights activists were horrified this weekend when the co-owner of a Dundas West restaurant they’d been protesting for weeks staged what appeared to be a counter-protest of his own.

The restaurant in question, Antler, is known for serving “local seasonal and wild foods” that are native to Canada, such as bison, boar, rabbit, duck and deer.

They also serve foie gras, which has long been condemned as especially cruel in terms of animal welfare.

A group of local activists had arranged a protest in front of the restaurant on Friday evening, writing on Facebook that it would be their fourth of such protests outside Antler…

About an hour into their demonstration, protesters say that the restaurant’s co-owner and chef, Michael Hunter, “brought out an entire animal leg and started cutting it up right in the window on a table reserved for diners.”

Event organizer Marni Jill Ugar wrote later that night on Facebook that she felt Hunter had been “taunting” the group by cutting up a deer leg right in front of them.

“Once the deer was cooked Michael Hunter, owner of Antler, sat back down at the window to eat the dead deer,” she wrote.

The report says police showed up and went inside the restaurant to find out what was going on but left smiling. If that’s not a happy ending, I don’t know what is.

Vegan protesters were shocked after a #Toronto chef responded to their protest by carving up an animal right in front of them https://t.co/CY0zU0a1By pic.twitter.com/Mj04bnzxVp

As you can probably imagine, this garnered some great responses on Twitter:

A Toronto chef responded to vegan protesters by carving up meat in front of them. The protesters wanted to be outraged but they were too tired and malnourished.

In response to the #vegan #Toronto hissy fit over some window deer butchery … I submit this. Sous vide pork spare ribs ready for the bbq pit with a ginger cayenne and fiesta fajita seasoning rub ???????????????? pic.twitter.com/SJRmq9Movu

Someone in Toronto give him a trophy for this savage move.https://t.co/7PiVvtqLKT

Everything about this makes me to eat here now. I would like to personally thank the protesters for advertising this establishment. I did not know a place like this existed. I also hope those nice police officers had a good lunch. ????
https://t.co/y4WiVvjCq2

Good for the chef! I imagine that deer had been “triggered” into submission.

“Event organizer Marni Jill Ugar wrote later that night on Facebook that she felt Hunter had been “taunting” the group by cutting up a deer leg right in front of them.”

Said the belligerent person from a mob of protesters holding a large sign inscribed with ‘murder’ in front of a private business. smh

She needs to take her dose of Emote-E-Um.

“she felt Hunter had been ‘taunting’ the group”

Man, she is really quick on the take. She should be immediately awarded a Masters degree in, oh lets say, that extremely difficult and challenging discipline known as “education.”

MEMO to this wacko group: It’s not hard to find murder taking place in your City of Toronto. There are several nearby abortion factories.

But it is illegal to protest in front of abortion clinics in Toronto. Protesters are not allowed within 300 metres of the clinics.

Words never spoken: “Really? I never knew you were vegan!”

Would that all these groups could go about their private business by not being obnoxious! Or infringing on the legal rights of others wanting to go about their business.

My younger brother was a vegan until he died. He claimed that he wasn’t all that interested in converting others – and then proceeded to try to smug me out over it.

Seventh Day Adventists are the only polite and friendly vegetarians I have ever met. I didn’t know any other kind growing up. Vegetarian meant you trimmed the fat on your steak where I come from.

“… I personally know vegans and vegetarians who never mentioned it until it became relevant, i.e. while making dinner plans.”

At which point all vegans/vegetarians become obnoxious.

I helped a friend with BBQ prep. Among the invitees were a couple we didn’t know were vegan. But they politely told us that they’d like to come to the BBQ but couldn’t eat meat.

So we made them vegan kabobs. Which they sanctimoniously refused to eat because it had been cooked on the same grill that had been used to cook meat. Even cleaning the grill wouldn’t have been good enough; they demanded an entirely new vegan-only grill.

We eventually told them, fine, don’t eat it. Starve for all we care.

And, no, vegans. You don’t get a discount at a fixed-price all-you-can-eat BBQ restaurant if all you are willing to eat are certain items at the salad bar. Because it turns out they don’t have a vegan-alternative to the (blanking) BBQ’d meat.

There are Indian restaurants around here that are entirely vegetarian. I don’t march into those places and demand a steak.

Truth: Son-in-law – and Ithaca resident – is a focused vegan, a long-distance runner, and also a great guy, hard worker, and responsible citizen.

The conservative ones usually just let people go about their own lives.

the Liberal ones DEMAND you change your life

And *that* is how you deal with bullies. Confront them. Don’t give them an inch.

Some people here could learn a thing or two from this.

Liberty Farm just did the same. Remember that they were sued for not allowing gay wedding to take place on the grounds. Now, they allow them—the only caveat is that proceeds from EVERY wedding will have a portion donated to one man/one woman and sanctity of marriage causes.
More than one way to skin a cat.

Yes, that is the way to treat anti-abortion protestors.

Yeah. Do that. Please. That will SO work.

Over on Taki a few days ago, someone wrote that the way to deal with the modern Communist threat is with a “relentless campaign of satire.” I mocked.

However, now that I see it in action, I rather like it.

And what do they say on stormfront?

I see the Nazis are out in force today. Taki is an antisemite and no decent person admits to reading his blog. Anyone openly admitting this might as well admit they read stormfront too.

As far as I am concerned, until you prove otherwise, this guy taki has simply said something you don’t like and can’t counter. So your only option is to either get him to shut up, or insult people so they don’t listen to him.

That is my default position. Especially because you are now calling people Nazis merely for visiting his site. I haven’t visited his site; I don’t know him from Adam. But I will now.

When you start calling people Nazis, you are admitting you have already lost a debate and your only hope is to shut it down.

There’s a small cadre of Alt-righters here, playing their leeetle games. One trait is they all think they’re really clever.

If I had any reason to visit Toronto, I’d make a point of going there for dinner.

Good for him! Great way to tell the nuisances that he’s not going to knuckle under to their demands! Hope his business saw a decent upswing after the event.

There’s a place for all God’s creatures. Right next to the potatoes and gravy.

As I noted in another thread…Alaskans love all animals, some just take a longer to cook.

I went keto recently. My wife can still make a mean gravy but the potatoes are mashed cauliflower. Not bad the way my wife makes it.

Save the whales! Collect the whole set!

^ Today’s winner of the internet, folks.

“Save the Whale … for Dinner!”

I mow down the critters of the forest,
Their death bleats a salivary chorus,
Hares go well with beer,
Though I prefer deer,
You can’t strap a bunny on your Taurus.

So … since two can play the “escalation” game, the next step is to firebomb the place. And, it being Canada—which, at some very fundamental level, is even more oppressively wacky than California—the perp will never even be charged.

One can’t go bucking trends, now, can we? I wonder how much doe it takes to buy a meal in that restaurant? Will they let me sit up front, or be hind?

Wordplay is a lot of fun and helps keep the mind sharp.

I think Toronto is in Canada, but lets hope the attitude is infectious.

Old joke from the 70’s. What is the capital of Canada? Mostly American. I just hope that the restaurant has placed a number of high-resolution video surveillance units nearby. Not that I’m suggesting that they think even once, but it might make the miscreants think twice.

How do you tell when someone is a vegan.?
You do not have to.,they will tell you.

Nothing like deer tenderloin, soak in vinegar overnight, cooked like a pot roast with carrots potatoes ,onions ,turnips and a little red wine.

One of my favorite observations is: “We worry if polar bears will have enough ice. Not many decades ago we worried about how best to cook one”.

And , of course Cartesian bears. Same as polar bears but with differnt coordinates.

Vegans are fanatics. I worked with a couple and all they talked about was food and it’s preparation. One guy bought a device that takes moisture out of food producing unedibledry vegetables.