Says they intentionally created climate change, knowing it would cause people to die 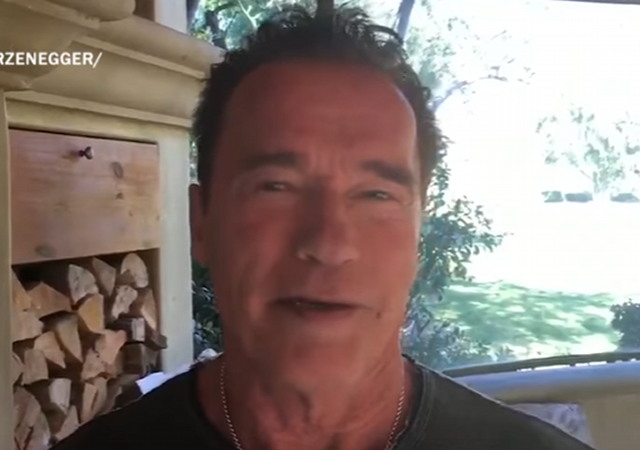 At South by Southwest, Arnold Schwarzenegger announced his big plans to sue the oil and gas industry.

Schwarzenegger claims the oil and gas industry intentionally caused climate change and “knowingly killing people all over the world.”

To date, no complaint has been filed, but Schwarzenegger said he is currently working with several law firms.

He likened the fight to the tobacco industry. Politico reported from SXSW:

“This is no different from the smoking issue. The tobacco industry knew for years and years and years and decades, that smoking would kill people, would harm people and create cancer, and were hiding that fact from the people and denied it. Then eventually they were taken to court and had to pay hundreds of millions of dollars because of that,” Schwarzenegger said.

And when it comes to oil and gas companies, Schwarzenegger used some colorful analogies to express his deep-seeded conviction to the fight:

“The oil companies knew from 1959 on, they did their own study that there would be global warming happening because of fossil fuels, and on top of it that it would be risky for people’s lives, that it would kill.”

Schwarzenegger said he’s still working on a timeline for filing, but the news comes as he prepares to help host a major environmental conference in May in Vienna.

Every car should have a warning label on it?

No word on if he plans to label every vehicle in his massive collection though:

He argues that at the very least, this would raise awareness about fossil fuels and encourage people to look to alternative fuels and clean cars.

He added, “I don’t think there’s any difference: If you walk into a room and you know you’re going to kill someone, it’s first-degree murder; I think it’s the same thing with the oil companies.”

You can listen to Schwarzenegger’s remarks here.

I’m sure – give his belief – that dah Ahnold doesn’t burn a single molecule of fossil fuel in his daily life….right?

Nor his Kennedy Trophy Democrat Party Wife, no?

Go knock up another maid.

So sorry for downvote. My big fat thumb was trying to hit reply so I could say “snort”! That was funny.

SXSW? You mean that whitest of white privilege whiteness gathering every March to select a virtue signal champion of indeterminate gender identity?

How would Arnold have standing? That’s a thing right, for lawsuits? Seems pretty foolish to me.

Steroids…what a mess they make…

Lemme guess: Ahnold and Pelosi drink out of the same well?

notamemberofanyorganizedpolicital in reply to judgeroybean. | March 12, 2018 at 2:26 pm

What a mess Arnold has made of himself and his life. Guess this will be the final humiliation. The rule of law would say he has no standing, much less proof. However, this is California where laws seem to be made up on personal whims. So who knows what could happen in the short run.

At a minimum sanctions should be applied per FRCP 11.

Only if he finds a lawyer willing to file for him. If he goes pro se there’s nobody to sanction.

Did Arnold walk to Austin from CA so as to not burn any fossil fuels? Of course breathing would produce CO2.

And the Tex-Mex food with beer would produce methane…

on steroids, in his case…
LOL

He better set off soon on foot to walk to the East coast where he can then pick up a rowboat to get across the Atlantic.

Can’t see how can get to Vienna by May.

Steroids on the brain…..

Someone should get him to a doctor and test him to determine whether he caught syphilis from the maid and whether that is what is wrecking his brain.

I wonder if he still has his civilianized H1 Hummers?

I notice he’s standing in front of a stack of firewood in the photo. Doesn’t he know that burning wood gives off CO2?

Arnold and Beto must have been smokin’ the same stuff at SXSW.

Yikes, Arnold needs an intervention by family members. He has gone cuckoo – maybe his brain chemistry is damaged from those years of steroids or other drug abuses.

Hey Arnold family, your guy is spewing deranged commentary in public, do you care?!

This from a guy who while he was guv, flew home in his private jet every night from Sacramento.
I wonder if Algore will join him?

Arnold is committing first-degree murder on his own intelligence.

He just wants to move up in relevance to where Sally Kohn has climbed.

Is it actually possible for a person to be that dumb?

How many people would be dead if the oil companies stopped selling fuel in 1959 for fear of Global Warming? Pretty damned cold up here in Maine with no fuel.

Nobody in 1959 could possibly have predicted that nearly 20 years later someone would come up with the theory that the use of fossil fuels would end up making the planet too hot for us.

Still haven’t quite gotten over how everyone “knows” that “fuel” comes from “fossils”.

Actually there’s some reason to suppose that the “Greenhouse theory”, which became “global warming” and then “climate change” was initially started by the nuclear power industry to drive people away from fossil fuels and towards nuclear.

Steroids and Botox do not mix.

Nothing stopping him from giving up energy use. Wonder why he’s not leading the way.

Ha, not really, he’s a hypocrite.

Does he actually have a lawyer who is willing to put this nonsense in front of a judge?

How about a class action suit against all socialist for the millions murdered? Or sue the Democrats for the Civil War? Or Islam for subjugation of billions?

I wonder if Arnold would appreciate energy companies mote if he lost power to his number one house. Plus was unable to use any vehicles to move around.

what will they do when the PG&E moves out? True, it’s not that cold or hot that they can’t live without power But it will be tough to get to work in those traffic jams.

So based upon your argument Ford, Chevrolet, Honda and Toyota should be arrested for all the fatalities caused by cars?

There should be a pile of dead bodies somewhere obvious if his claim is plausible.