Student Punished for Saying There Are Only Two Genders Gets Reinstated

Student Punished for Saying There Are Only Two Genders Gets Reinstated 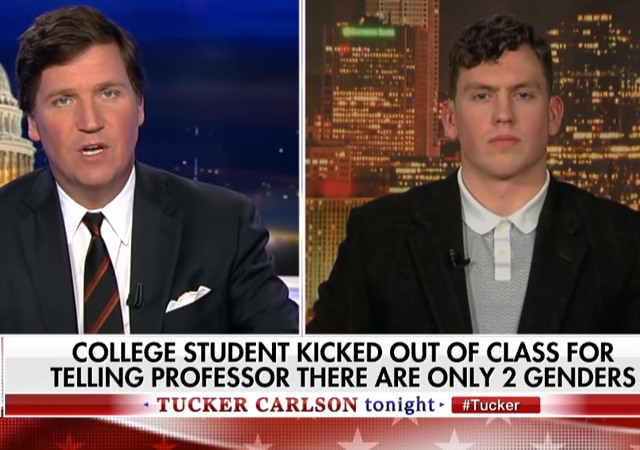 Lake Ingle has been reinstated after an 18 day banishment from his religion class. How much do you want to bet FIRE had something to do with this?

Lake Ingle, a religious studies major at Indiana University of Pennsylvania, was kicked out of Christianity class earlier this month for saying there are only two genders. He is now allowed back in.

Ingle told Fox News he was booted out of Downie’s classroom for challenging the feminist theology professor on the biology of males and females and the gender wage gap during a Feb. 28 lecture in which she allegedly asked only women to speak following a TED Talk by transgender ex-pastor Paula Stone Williams. Williams discussed the “reality” of “mansplaining,” “sexism from men,” and “male privilege.”

Downie kicked him out of class and asked him not to come back, which would have postponed his graduation if not for the college president’s decision.

Driscoll said he is “disappointed” in how the university handled the situation, adding it had “fallen short” of devotion to the First Amendment.

Ingle considers the end to his 18-day exile a victory.

“I’m happy I can get back to class and graduate on time,” Ingle told Fox News. “I was surprised the president stepped in before the ruling but glad he made the right choice.”

I can’t understand why a student would waste his time and money on such a biased and useless class. Even worse, majoring in an area that requires these kinds of classes seems pointless. Students will graduate with enormous debt and no useful skills that will help them to find jobs to pay those debts.

Which is likely one reason the teacher is so comfortable spending class time propagandizing and otherwise harassing students instead of teaching – no chance the college will drop the course because of low enrollment – endangering their job.

You CAN teach with an individual point-of-view without resorting to telling students who might differ to shut up, and if your views are founded in logic and reason, allowing discussion that’s actually discussion and not rote agreement to pass might actually allow you to “convert” a student or two who think differently.

But if your views are based on “feels”, allowing others to disagree is dangerous as it might make you look like an idiot. More than you already do, anyway.