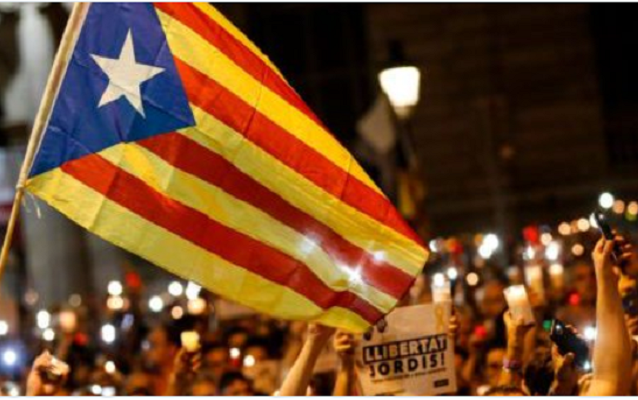 Catalan’s deposed leader Carles Puigdemont has been living in exile in Belgium since October. 2017 and was thought likely to run for regional president.  Puigdemont, however, has announced that he will not be running for president and has instead endorsed Jordi Sànchez.  Sànchez is currently in jail in Madrid.

After four months of impasse, though, the separatist leader on Thursday abandoned his bid to resume the leadership of the wealthy province.

. . . .  On March 1 Catalonia’s majority separatist parliament defends Puigdemont as the “legitimate” candidate for the regional presidency.

The move is widely seen as a way to encourage him to step aside without losing face.

Hours later Puigdemont announces in a solemn video posted on social media that he has abandoned his bid.

“I will not put myself forward as candidate to be appointed regional president,” he says.

Puigdemont has further announced plans to form a government in exile, over which he will preside.

Speaking to the Guardian a day after he announced he was stepping back from the presidency and anointing a jailed MP as his successor, Puigdemont said he would use a new “Council of the Republic” to coordinate and further the secessionist cause.

“It’s like a government in exile,” he said. “It’s not in the shadows. We prefer to work in the free space without threats or fears. It must act without the problems of Spanish justice or police. It’s a cabinet or government that must represent … our political reality.

“It will represent the diversity [of Catalonia]. I will invite all the other parties to take part. The council must have representation from local communities and civic society … We will move from the old system of government for the people to a new system which is [government] with the people.”

. . . .  On Thursday evening, Puigdemont said he had decided not to continue his bid for the regional presidency and suggested that Jordi Sànchez, an MP in his Together for Catalonia party, should be the candidate.

However, Sànchez, the former head of the influential pro-independence Catalan National Assembly, is in a Spanish prison as part of an investigation into alleged sedition and rebellion in the run-up to last October’s unilateral independence referendum.

The Spanish government has responded by scornfully dismissing plans for a Catalan government in exile.

The Spanish government dismissed Friday the latest efforts by Catalan separatists to advance their independence bid, saying a planned Catalan government in exile would have no legal authority.

The government also said Jordi Sanchez, a prominent secessionist proposed as Catalonia’s new president, can’t take office because he’s in jail in Madrid awaiting possible trial on charges of sedition and rebellion for his part in recent Catalan attempts to break away from Spain.

If Catalunya decided to become its own independent country, then Spain’s economy would collapse. And that, quite simply, is why the will never be allowed to become independent.

An exile government is a noble gesture, but it will be that only. If only Spain would allow their people to be free, not subjects. Socialism is the norm, and fascism is still deeply ingrained in the nation, even after Franco’s death so long ago.

Independence will not be tolerated. So sad. Barcelona is a unique international treasure; the people of Catalunya are some of the most open, welcoming, warm, wonderful people, with such rich heritage and history!

1) They HAVE decided – they voted on it. Edited, the first sentence should read: “If Catalunya were permitted to become….”

2) Second sentence – correction: *they – as in, “…And that, quite simply is why THEY will never be allowed….”

Oh, for an Edit feature.

Brilliant move, nominate someone already in prison so the powers that be can do nothing to him unless they free him so they can arrest him again but do not dare because he could escape their jurisdiction.

This is a confusing issue. Catalonia is recognized as autonomous but the Catalonians say that they have/had a right to independence under the Spanish constitution and under UN/EU rules. Both the Spanish govt. and the EU say no.

While I am against the further Balkanization of the EU, I am even more against the EU itself so I am not sure where the right place to stand on Catalonian Independence.

No need to spend a lot of time concerned about the contretemps, it has been ongoing since the early to mid-1700s.

The Spanish government has responded by SCORNFULLY dismissing plans for a Catalan government in exile.

The pride that comes before the fall.