Shocking no one outside of Hollywood, Oscars ratings hit all-time low

Shocking no one outside of Hollywood, Oscars ratings hit all-time low

Who knew no one was interested in watching self-aggrandizing moral posturing from a bunch of overpaid phoneys? Oh, that’s right, EVERYONE. 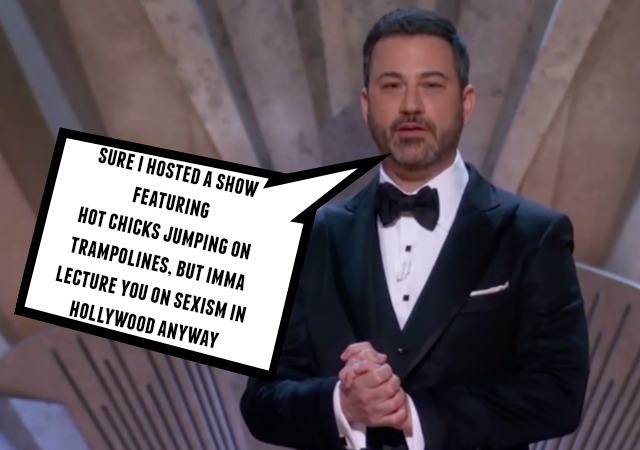 Whether they’re lecturing the rest of us lowly Americans about our political beliefs, feigning moral superiority, mocking traditional values, or acting like everyone from the South is a racist hick, those in Middle America no longer give a rat’s ass about the annual self-aggrandizing parade known as the Oscars.

Turns out, no one is really interested in listening to a bunch of overpaid phoneys parade their shallowly formed moral opinions, especially not when the same elitists are simultaneously harboring rapists and pedophiles.

This year, in a post-#MeToo world, created, condoned, and later blown up by Hollywood, viewers disinterest in Progressive Virtue Signal Land hit an all-time low. And not just by a tiny little bit — ratings tanked by a whopping 19% compared to 2017.

A comparatively uneventful Oscar telecast led the way on TV Sunday night — though updated numbers have the telecast somewhat predictably stumbling to an all-time low.

The telecast, nearly four hours long, stumbled 19 percent from the previous year to 26.5 million viewers. That’s easily the least-watched Oscars in history, trailing 2008 by more than 5 million. Overnight returns had the lengthy ABC telecast averaging a 18.9 rating among households between 8 and 11 p.m. ET. Compared to the same stat for 2017, the night the wrong best picture winner was named, that was down a more modest 16 percent.

The 2017 Academy Awards, which earned a 22.4 overnight rating, ultimately fetched 32.9 million viewers for ABC — as well as a handsome 9.1 rating among adults 18-49. Still, those numbers reflected the second-lowest in Academy history. (ABC did not immediately report the adults 18-49 rating for Sunday’s Oscars, and Nielsen won’t widely distribute that information until Tuesday.)

If host Jimmy Kimmel’s attitude reflects that of the rest of Hollywood, then they truly see themselves as the mecca from which all moral authority flows. How could we ever navigate through life without Hollywood’s direction?!

You may remember Kimmel from ‘The Man Show’ which had regular segments of hot chicks jumping on trampolines:

No one is more deserving, really:

.@michellemalkin: “At the end of the day… the number of Americans who are tuning out all of these hypocritical liberals is larger than it’s ever been.” pic.twitter.com/Yvgxe2ZjQK

The virtue signaling, moral preening is not unique to Hollywood, although it is, I suspect very popular amongst the liberal-socialist.

How about a law to protect us from school officials and law-enforcement officers who creatively deal with miscreants, who later inflict evil on society? They hid crimes so their statistics look good, and perpetrators learn they won’t be punished. Had the sheriff’s office charged the Parkland shooter on any one of a number occasions, he would have not been able to legally buy a gun. He would have been a bigger bleep on the radar.

Murder is illegal. Bringing illegally purchased guns to a school to murder innocents is illegal. Why wasn’t this fellow already in jail?

Don’t forget, in the Gifford shooting, the sheriff knew how to pronounce the fellows name, and was very familiar with the shooter.

If this was an oil company instead of a school, they would have dozens of civil suits and a Twitter feed that highlighted …
#BrowardKnew

notamemberofanyorganizedpolicital in reply to Neo. | March 6, 2018 at 2:10 pm

So should Hollywood and the Oscars.

As the Oscar Wienies go, so goes CNN.

“CNN doesn’t have a single broadcast show in the top 40 of cable. CNN’s current ratings are the worst in their history. CNN uses Bananas and Apples to explain their 2018 journalistic mission statement.

A few months ago, a special CNN investigative unit reached the end of a year compiling information that proved Pokemon-Go conspired to defeat Hillary Clinton. Last month the network sent a reporter to St. Petersburg, where he literally dug around a dumpster looking for leads to the global Russian election conspiracy….”

Great meme on Kimmel… I happened to catch about 10 minutes of the Oscars… just as Kobe Bryant collected his award. You can’t make this stuff up.

Who wants to watch smug jerks lecture us?

Explains the low ratings for C-Span.

I honestly had no idea this event had even happened until I saw this post about it.

notamemberofanyorganizedpolicital in reply to Milhouse. | March 6, 2018 at 2:11 pm

You’re in the mainstream!

Re ‘ratings all time low:’

Voting with our pocketbooks works.

Now, boycott their movies and television shows. There are a lot of other things you can do.

Was anyone else infuriated by the “beautiful” people going to the theater where the real folks were watching and shooting them hotdogs? I didn’t watch but heard The Five talking about today. If that doesn’t tell you everything you need to know about these hypocrites, nothing will.

The FBI was among the army of law-enforcement people protecting these creeps.

The FBI won’t even bother trying to protect school children, but Kimmel and friends – they “deserve” protection.

notamemberofanyorganizedpolicital in reply to JOHN B. | March 6, 2018 at 2:13 pm

“Burds of a feather Sandra Fluke together.”

I haven’t watched any awards show in about fifteen years. I cannot stand these preening, self-congratulatory exhibitionists. They are disgusting.

As for their films, I am down to one or two per year, but usually not a Hollywood production.

I know it is a mistake to cede the culture war to these smug imbeciles, but I don’t have the time or stomach to fight, so I just ignore them.

“I know it is a mistake to cede the culture war to these smug imbeciles, but I don’t have the time or stomach to fight…”

And more are coming to the realization that this really IS war:

Schlicter notes that George Bush kept his mouth shut the entire Obama presidency but as soon as we deplorables elected Trump, well … that’s a bridge that’s just too far.

As I eluded to in another thread, we conservatives aren’t pushing back as much as we’re loudly complaining that the left is out of bounds.

That needs to stop (and no, the authorities won’t help us). I’m reminded of something JFK once said …

notamemberofanyorganizedpolicital in reply to The Packetman. | March 6, 2018 at 3:21 pm

RE: “George Bush kept his mouth shut the entire Obama presidency but as soon as we deplorables elected Trump, well…”

I thought these people claim there are no moral absolutes. Who are they to force their morals on us?

Morals have nothing to do with it.

It’s all about power.

The purposes of the Oscars = the purpose of movies that get Oscars.

An Oscar-oriented film does not have to entertain, or make money. It has to posture and pose in the way that Hollywood belives is Correct. In the same way, the Oscars do not give a rat’s rear about ratings or entertainment value. It is a stage upon which Hollywood can preen and display how much superior it is to the lower classes.

When “The SpongeBob SquarePants Movie”, wasn’t even nominated for “Best Picture”, that was the last straw for me.

I haven’t watched the Oscars in at least a decade (maybe two). I used to be of the mind that movies were separate from politics, that I could enjoy, say, a Susan Sarandon movie without being caught up in her leftie lunacy. And I could, I loved Thelma and Louise (though I wouldn’t watch it now, even for free unless it was a dvd someone else had purchased).

I soon began to realize, though, that these people hate, mock, and deem me “deplorable.” Why would I spend a dime on them, fatten their egos, increase their salaries by millions, and (this was the kicker) give them greater fame and and the ever-more giant soapbox that comes with it? These people go out of their way to attack me, my values, my country, my God, and they don’t deserve one red cent from me until they shut the hell up and make movies (or tv shows, music, whatever).

They can believe whatever they want, but when they start using my money to preach their crazed lunacy back at me, I’m done. I don’t push anyone to follow suit, but I haven’t been to a movie in forever (the last one I saw in a theatre was a Clint Eastwood movie with my dad), and I won’t even watch films or shows featuring actors/actresses on my “no buy” list on Roku channels because I know they are busily gathering viewing habits and preferences.

One of the hardest to avoid is Morgan Freeman; he’s in–or narrating–freaking everything!

I’m sort of on a tangent here, but I just read Matt Walsh’s article on the topic, so it’s on my mind. Here’s the article, if you’re interested: https://www.dailywire.com/news/27839/walsh-christians-if-we-hate-hollywood-so-much-matt-walsh

How did the viewership compare to the usual Sunday night traffic? Is there really a story here, or not?

It was a small intimate affair among the Hollywood scene.

I didn’t see the need to peek in.

Today’s San Diego Union-Tribune had a bland little article “Oscar ratings plunge to record-low 26.5M,” that attributed the poor numbers to the general decline in TV viewership, lack of popularity of the top movies, and time slot. It did note that ratings for live events have been falling, including Grammys, Screen Actors Guild Awards, Super Bowl and Olympics.

Somehow, the word “boycott” never made it into the article.

They got viewers mostly by ensuring that nothing else was on. I don’t know when it was on because I was watching something else. I’m watching more from the UK and AU these days than US productions. Hey, watch the original rather than the lousy remakes. Since this is a legal forum, I should point out that s05 of Rake (AU) starts up soon. If you haven’t seen it, think Rumpole on crack. You’ll soon be a Cleaver Believer.