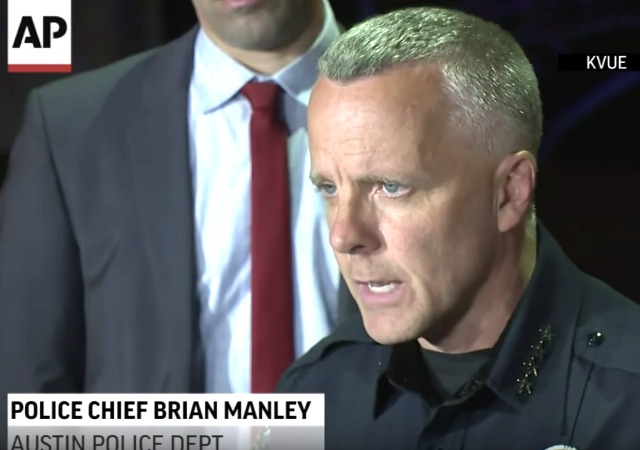 Four explosions this month in Austin, TX, have the city on edge. The latest occurred on Sunday night and injured two people on bicycles.

Authorities believe this last one was triggered by a trip wire.

Chief Manley said in a follow-up press conference at 1:45 a.m. Monday that the possibility the bomb was triggered by a trip wire and the fact that the explosive device was left next to the road instead of on a front porch like the previous three cases necessitated a new warning to the public:

“We now need the community to have an extra level of vigilance and pay attention to any suspicious device, whether it be a package, a bag, a backpack, anything that looks out of place. And do not approach it. Again do not approach items like that, but instead call 911 to report it so we can go out and make sure it’s safe.”

Initial reports indicate some key differences between the latest bombing and the other three, including that it happened at night, did not occur in east Austin, did not appear to be on someone’s front porch, may have been set off by a trip wire and may not be a package. Police are asking anyone who sees anything suspicious — not just a package — to call 911.

Manley said that they do not have confirmation this explosion is related to the first three, but that they are “working under the belief” that it is. 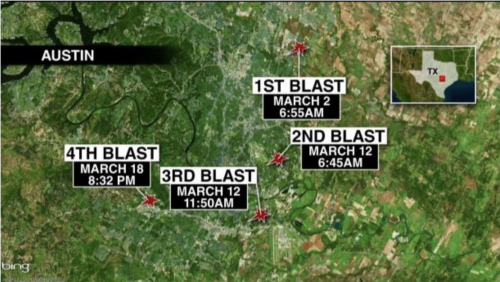 The first explosion killed Anthony Stephan House, 39, on March 2. Two explosions in a matter of hours happened on March 12 that killed one person and injured two more.

Manly said the authorities “have still not ruled out” race being a factor in the bombings. That was the first assumption with the three previous bombings since the victims were black or Hispanic. The victims on Sunday were white.

I think the two deceased victims have an uncanny resemblance to each other.

I live in Austin , I doubt we solve this unless someone turns this f¥€ker in

I think the key to tracking the bomber down is going to lie in figuring out his target selection – it is very strange. The first three bombings were of members of 2 families, and the bomber knew their home addresses, which is why he could deliver the packages personally. Now this 4th bombing doesn’t fit into that paradigm at all that we can tell so far, but it is still very strange. It appears to have been a fairly sophisticated bomb with a tripwire – but why leave it on the side of a road where it may injure a couple of random people? If you wanted impact by killing a bunch of people a killer would usually pick something like the las vegas shooter did.

Are we sure this isn’t a copy cat kind of crime?

A copycat with more sophisticated technique?

Have any whites been involved in the bombings? The only victims that I have seen are black. Might suggest a racist motive.

The latest 2 victims are white.

There’s no racial motive, so tired that that’s the first go to, Latino, white and black all hit, in fact, in a town over a million, my daughters HS orchestra teacher, brilliant woman, who runs the a state orchestra agency, the 17 y/o was in her orchestra, was a beillant kid, the Latino woman who was in in 70’s, lost a armand leg, was an aunt of my husbands employees.

Crimes are not solved by political categorization. In fact that is how crimes remain unsolved. They are solved by reviewing the evidence. In this case there will be remnants of the bomb materials in the victims and in nearby objects. These houses were chosen because they did not have visible cameras. It can take a long time to ascertain that. So the bomber did not do that for the fourth incident.
Lastly, trip wire bombs that trigger instantaneously are very difficult to make. That is a clue. Ex-military special forces? Ex-cop bomb squad? Trained by a terrorist group?

I don’t see how adding a trip wire to a bomb makes it more sophisticated than a package rigged to blow up.

A package on the front porch could just as easily have a trip wire tied to something stationary that trips it when moving it. Reporters and talking heads watch too much TV.

And certainly the police and FBI aren’t really giving much relevant details about the bombs to the news people anyway.

Trip wire bombs that detonate without delay are extremely sophisticated. It means the bomb was set off by an electronic detonator or a very dangerous to make percussion detonator (which would be a tad slower).

No, they are not. Any displacement switch can be employed in all these bombs. The trip-wire doesn’t even have to be part of the design…just a way to make it move enough to close the circuit. Once armed, walk away…