Plane Over Siberia Loses $368 MILLION of Its Gold, Platinum, Diamonds

Plane Over Siberia Loses $368 MILLION of Its Gold, Platinum, Diamonds 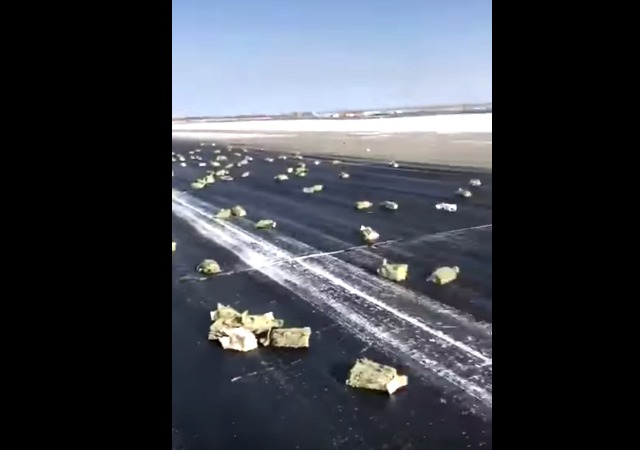 Oh my goodness. A plane over Russia’s coldest portion of Siberia lost its cargo of $368 million in gold, platinum, and diamonds as it took off. From The Siberian Times:

The plane with ten tons of gold, platinum and diamonds lost part of its cargo after taking off from Yakutsk airport today.

More rained down as the aircraft gained height.

The Nimbus Airlines AN-12 cargo plane hit problems during takeoff; the treasures fell out of the hold all over the runway.

The plane then dropped some bars of gold as far as 26 kilometres from the airport.

The crew decided to land at the nearby airport of Magan, some 26 kilometres north-west of Yakutsk.

Police sealed off the runway and a vast search is underway.

The plane was en route to Krasnoyarsk and further to Kupol (Dome) mine.

The cargo was reported to be owned by Chukota Mining and Geological company; 75 per cent of the private company is owner by Canadian Kinross Gold.

Yeah, sure, that happens all the time: plane has “difficulty”, cargo goes flying. All the time!

It sounds like the old story of how in the old Soviet Union, in the factories, vodka in bottles had an extremely high accidental breakage rate compared to the breakage rate of vinegar in bottles. Just a lot of bad luck losing all that vodka when the bottles broke.

At least the specifications for the plane give a rated payload of 20,000 kg when there was supposed to be over 10,000 kg of valuables aboard, instead of the plane claimed to be a Beechcraft Baron twin engine light plane with a maximum takeoff weight of less than one quarter of the claimed load.