Philadelphia set the bar last year when officials added a 1.5 cents-an-ounce to sweetened beverages. It only brought in $78.8 million…$13 million less than they city hoped.

You mean to tell me that when you charge a lot more for pop that people won’t buy it? I’m SHOCKED! Not really. I mean, as a loyal Diet Coke consumer, the tax wouldn’t have pushed me away. But come on. You shouldn’t really rely on a tax on something that people can avoid.

As a result, the city has decreased the number of pre-K seats and community schools it planned to open in the next five years. Instead of expanding the free pre-K program to serve 6,500 children by fiscal year 2023, the city is estimating a maximum of 5,500 seats. The number of projected community schools has also been cut, from 25 to 20. And spending for the Rebuild Initiative to improve parks, libraries, and recreation centers will be scaled back, according to Finance Department officials. 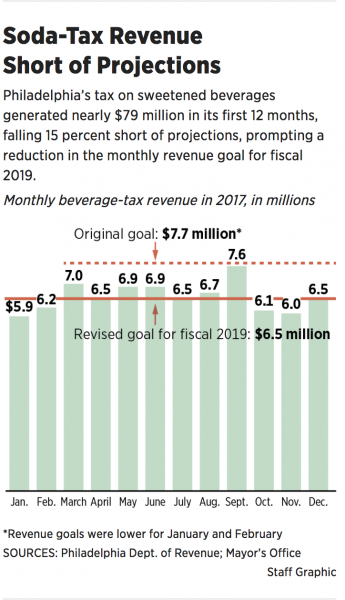 Opponents said that this is proof it’s unsustainable. The Pennsylvania Supreme Court has decided to consider a challenge to the tax so “the city has not yet fully expanded the programs it funds.”

Despite the lack of funds and the court’s decision, those who propped up the tax remain proud of it.

So now what does Philadelphia do? Impose a higher tax to something people cannot avoid: property tax. From NBC Philadelphia:

Philadelphia Mayor Jim Kenney asked City Council on Thursday to pass a 6-percent increase in property taxes to help erase a nearly $1 billion budget deficit projected for the city’s public schools over the next five years.

In total, Kenney asked for roughly $900 million in new funding for city schools during his 2017-2018 budget address. He also wants to halt a planned reduction in the wage tax.

The city formally takes back control of the School District of Philadelphia from the state-run School Reform Commission in July. The SRC, which is dissolving, has run the district for more than 16 years.

Philadelphia has the largest school district in the state and eighth largest in the country:

“Let me tell you, the children of the Philadelphia School District, the real underdogs, are hungry,” Kenney said. “They’re hungry for the one thing that students and families in other parts of this state take for granted: hope. Hope for a better future. I stand here today ready to be held personally accountable for this.”

That may have been #13.3 Mil less than they bargained for [6 days worth – less than one week equivalency unattained], but that’s most definitely still not a “fizzle”. Not by a longshot.

I guess you might need some of that education money.
Your calculations seem to be off by an order of magnitude.
It’s $215,890.40 per day.

Well the lesson to the City is obvious – they didn’t make the tax high enough!!!

It’s also a tax on the poor, who consume more soft drinks then ‘more fortunate’ residents. Why do lefties hate poor people?

As a long time resident of the suburbs of Philadelphia, I can predict that this will just get worse for Philly, as residents scour the suburbs for their favorite soda in order to dodge the tax. My Dr. Pepper is usually out of stock at my local Walmart, sadly. The burdens we bear…

Also, they can and do evade the property taxes, as my neighborhood is filling up with refugees from areas in North Philly. Philadelphia loses about 1,500 citizens a year and will soon drop to the sixth most populous city in America.

But they just don’t know what’s good for them. Lucky for them, their intellectual betters came up with the idea of raising the price so high that they just won’t buy it anymore….just like it worked with alcohol and cigarettes. I’m sure a prohibition would solve the problem.

Philadelphia decided to start the “free” Pre-K program long before there was a sugar tax.

That’s another way of saying the money was spent before they even got it. It’s not “extra” money they found under the couch cushions.

Yeah, I don’t see $78.8 Million as a fizzle either. Over projection of revenue and including the over projection in budget outlays is what I see. The other thing that I am not hearing is what public service campaigns were launched along side the sweet drink sin tax regarding obesity and diabetes. Obviously the tax is instituted to sway people towards healthier beverages RIGHT? I mean this wasn’t just a revenue tax right?

Actually, to make up the lost revenue, the schools will teach the students to tell their parents to buy MORE soda.

It is all about raising money. Claiming to care about health is just a cover story.

2017 – Drink moar diabetes sugar-water, plebs. Do it for the children.

To hear the mayor, you’d think all of Philadelphia’s problems are solved.
Well, except for the 6% property tax hike he proposed today.

So they’re raising the tax rates… only 6% they say? What they don’t mention is that the amount of property tax you pay is a function of the tax rate and your property value.

And property values in Philadelphia have been rising steadily in recent years (5% last year) so peoples tax bills have already been going up every year even without an increase in the tax rate.

Where has all that extra money been going?

The Philadelphia schools are an insatiable “black hole”

Also not mentioned … Philly has its own income tax on top of the state.

That is insane. And still Philly as a bigger budget deficit than most states.g

Black holes are massive objects in space which suck in matter and energy, their gravitational pull is so great that light cannot escape.
While theoretical physics was one of my passions, and I understand that many people are clueless, does everything they cannot understand, anything which interfere with them sucking up resources much like a black hole does, and people being tired of their useless and unproductive existences, need to be characterised as racist?
perhaps, like a black hole, all they know is what is swirling around them waiting to be consumed?
Perhaps a better analogy for cities is large cesspool, with a sink hole at its center:) At least a black hole is interesting

Doesn’t matter. You said “black hole”. That’s racist. (Except in Russian, in which it’s obscene.)

The thing that is totally crazy with respect to this legislation (apart from its inherent craziness, LOL) is that the tax is levied against sodas that are sweetened with stevia extract, which is a zero-calorie, naturally-derived sweetener. One would think that the Leftist apparatchiks would exempt such sodas (such as the Zevia brand — I’m a big fan of those products), in the interest of encouraging shoppers to switch to healthier options.

From your link (thanks): “Drinks considered “diet” or “zero calorie” are also taxed. .. Examples of sweetened beverages: Soda (regular and diet); non-100%-fruit drinks..” So all the façade of it being a justifiable ‘sin tax’ to encourage the residents to switch to healthier drinks is smashed by their own admission: zero calorie diet drinks are also taxed, but 100% fruit juice is not, example: “Take a look at the breakdown for a 12 ounce (350 ml) portion of Coca Cola and apple juice: Coca Cola: 140 calories and 40 grams of sugar (10 teaspoons), Apple juice: 165 calories and 39 grams of sugar (9.8 teaspoons)” – https://www.healthline.com/nutrition/fruit-juice-is-just-as-bad-as-soda#section2 “A 12 ounce glass of grape juice contains over 58 grams of sugars. This is 20 grams more than a 12 ounces can of Coca-Cola. At 240 calories per 12 ounces, it’s also the fruit with the highest caloric value. .. A 12 ounce serving [of Apple juice] contains 39 grams of sugar — just 1 gram less than in a glass of soda. That’s about 10 teaspoons of sugar.” – https://www.livestrong.com/article/450038-juices-with-the-highest-sugar-content/

If you dilute a juice so that it is no longer 100% fruit, even if this is with water so that there are fewer Calories contained, then the drink immediately is subject to the tax.

It’s obvious that this is just an excuse to put a tax on another facet of life without logic or consistency of application.

I am also a big fan of stevia, using 2-3 lbs a year of extract. My daughter and I experiment with it in cooking.

Cook County in Illinois tried implementing the soda tax — a penny an ounce, and on anything liquid with sugar OR sweetener in it. There was enough protest that the County rescinded the tax. If such a thing can happen here it can happen in Philly.

How can anyone be so dense as to think that people wouldn’t just shop for pop outside the tax zone?

Well, the solution is obvious: beverage checking stations on the roads into Philadelphia: “Excuse me sir, could you exit your vehicle while we check to see if you have more than a TSA-limit 100ml of beverage. Ensure that you have your Philadelphia receipts if you have purchased sweetened beverages inside the city limits so you are not charged again on the Beverage Tax. Purchases made outside the city limits will not be charged more than you pay in Philadelphia, but there will be a standard $50 transaction processing fee on Beverage Tax payments assessed at this checkpoint. Please pop the trunk and hood before you exit the vehicle, sir.”

don’t laugh, when I lived in PA a long time ago the liquor stores in Maryland complaint that the revenue agents from PA were taking up too much space in their parking lots getting PA license plate numbers to intercept the cars are their way back to PA

Even with the sugar tax they are going broke and need some new form of taxation. Perish the thought they par back on programs that do not work or are not needed. “Need more money, need more money” they chant. How much longer do they pursue the holy grail of tax increases – legalized Marijuana?

In related news, soda sales in communities surrounding Philadelphia are up 115%.

[…] can’t sin-tax something to stop it from happening and then complain that there’s no revenue because it stopped happening. But that’s never stopped the […]

Does Philly have legal marijuana? That’ll get them back to the sweet stuff in no time, in additional to all the MJ taxes, none of which of course will go to drug treatment, just like lottery monies not going to gambling addiction, other than the occasional billboard.

At least the tax revenue is for a good cause: starting children earlier in the government monopoly “public” school system to be educated in progressivism so that they can be good Democrats.

See “Waiting for Superman” for a graphic display of the problem.
http://www.takepart.com/waiting-for-superman

No surprise that the City announces that fewer PRE-SCHOOLS will be opened…..NOT that admin salaries will be capped/reduced.

It gets OLD that any/all ‘new’ streams of possible revenue are ‘for the children’…..WHO believes this nonsense anymore !

The State of Illinois decided that it could raise money by increasing the tobacco tax. It did so. Result? The amount of money they collected went DOWN. Why? Most of the population of the State lives within driving distance of a State with lower tobacco taxes. Yes, it’s illegal for people to import tobacco (i.e., to drive across the border, buy cigarettes, and drive back into Illinois) without paying the tax differential. But it’s hard to enforce, and given the “all your money belongs to us” attitude down in Democrat-dominated Springfield (Illinois’ capital) people have no moral qualms about it at this point.

The people of Phila get the government they deserve. I, for one, will not help them pay for it.