Who’s believing this? Anyone? 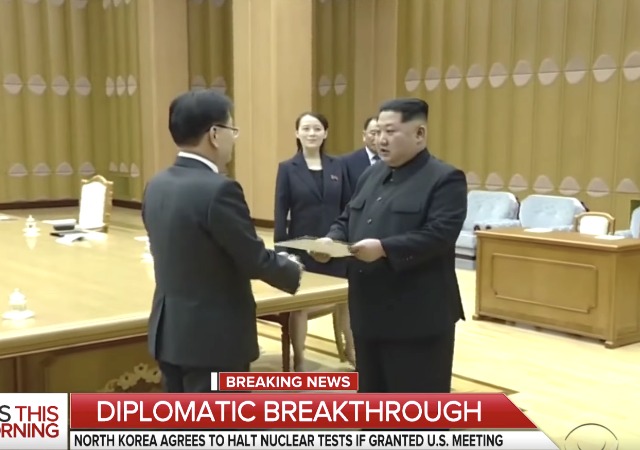 I woke up this morning to numerous news alerts that told me North Korea is open to talks with the US about denuclearization. I rolled my eyes because does anyone honestly believe this?

Yeah, I don’t especially after I dug deeper. North Korea said it is open to talks “and that it would suspend all nuclear and missile tests while it is engaged in such talks.”

US officials have said that they will only consider talks with the communist country “if it conceded to ‘denuclearization.'”

North Korean dictator Kim Jong Un made these remarks during a South Koreantwo-day visit in North Korean capital of Pyongyang.

Chung Eui-yong, South Korea’s presidential national security director, said in Seoul that the North was willing to discuss steps to roll back its nuclear program if the United States agreed to talks.

The North would also agreed to suspend nuclear and missile tests during the possible talks with the United States, he said.

Yeah, um, I don’t think that’s what our officials meant by denuclearization. I believe they meant that the hermit kingdom agrees to give up ALL of its nuclear weapons permanently. Not just during the talks.

“The North Korean side clearly stated its willingness to denuclearize,” the statement said. “It made it clear that it would have no reason to keep nuclear weapons if the military threat to the North was eliminated and its security guaranteed.”

“The North expressed its willingness to hold a heartfelt dialogue with the United States on the issues of denuclearization and normalizing relations with the United States,” the statement said. “It made it clear that while dialogue is continuing, it will not attempt any strategic provocations, such as nuclear and ballistic missile tests.”

Moon’s national security advisor Chung Eui-yong told reporters in Seoul that Kim “had been unexpectedly flexible.” For instance, he expected Kim to demand South Korea and the U.S. suspend joint military exercises, but Kim “simply said he could understand why the joint exercises must resume in April on the same scale as before.” Kim also said that he hopes the two countries will make changes “if the situation on the Korean Peninsula stabilizes in the future.”

Chung also reiterated that Kim made no demands of the Trump administration other than that “they wanted to be treated like a serious dialogue partner.”

Possible progress being made in talks with North Korea. For the first time in many years, a serious effort is being made by all parties concerned. The World is watching and waiting! May be false hope, but the U.S. is ready to go hard in either direction!

“While talking about nuclear abandonment several times, it turned out that North Korea didn’t halt its nuclear development in the past,” Mr. Onodera said. “We need to carefully assess if this North and South dialogue will really lead to the abandonment of nuclear and missile development.”

Former State Department official Evans J.R. Revere is also leery about the statements. He worked on North Korean talks before and noted that denuclearization in exchange for security guarantees has been used in the past:

“The U.S. has actually provided security guarantees to North Korea, including in writing by President Clinton,” Mr. Revere said. “Such guarantees have never been adequate or acceptable to the North Koreans, just as the U.S. provision of alternative energy sources, food and other assistance has never proved adequate.”

He also noted that the moratorium on nuclear and missile tests offered by the North would not prevent Pyongyang from continuing to build its nuclear arsenal, including by producing fissile material for nuclear weapons.

However, he admitted that “the Trump administration would be hard-pressed to reject the North’s proposal without making it appear that Washington — not Pyongyang — was the problem.”

Before the remarks became public, Lt. Gen. Robert Ashley, head of the US Defense Intelligence Agency, said that North Korea already owns “three long-range missiles, two of which can hit the U.S., and will almost certainly continue its nuclear and missile testing.” NBC News continued:

Despite sanctions and international condemnation, North Korean leader Kim Jong Un “shows no interest in voluntarily walking away from his nuclear or missile programs, which he has made central to his security strategy,” wrote Lt. Gen. Robert Ashley in an assessment to be delivered to the Senate Armed Services Committee Tuesday.

“Additional missile launches — from short range to intercontinental range — are a near certainty,” wrote Ashley, “and further nuclear tests are possible as Pyongyang seeks to refine its weapon designs.”

Ashley said that North Korea tested two types of intercontinental ballistic missiles in 2017 that could hit the U.S., a Hwasong-14 and Hwasong-15. Pyongyang also tested two Hwasong-12 intermediate-range missiles over Japan last year, the second of which “demonstrated a capability to range more than 3,700 kilometers, which can reach beyond Guam.”

Ashley wrote that all North Korea can easily launch an attack on South Korea and our forces with almost no warning. He noted that North Korea could also have “‘up to several thousand tons’ of chemical agents, such as ‘nerve, blister, blood, and choking agents.'”

The Norks don’t need nukes. They already have enough conventional artillery in place to destroy Seoul.

The NORKs shocked the world with the maturity of their Missile technology. Latest reports suggest that the missile engines may have been picked from a Ukrainian bone-yard and smuggled into North Korea. This would explain why there was so little testing involved. Usually you would expect hundreds of missile tests to get to this level.

If the NORKs really are using old Ukrainian missile engines – the number of those engines may be profoundly limited. So, maybe they made a big splash and are now coming to the table to negotiate from a perceived position of strength.

This seems like pure Diplomat talk, which is by design meant to sound like something it is not. North Korea uses this type of talk when sanctions are taking a toll, so they do these games to act like they are honorable intentions, while they really want to have easement of the sanctions against them.

The unification talk that went on during the Olympics is another classic example of disinformation. The Broadcasters were gushing over a possible united Korea, while they ignore that the only way North Korea would agree to it is if it is under THEIR leadership and way of life. Sounds just like the left in this Country these days. “We are open to compromise and bipartisan ideas, so long as they are exactly the way we want them.”

Every time North Korea talks this way, think of how Democrats harp on “bipartisan” solutions. It clearly doesn’t mean what they make believe it to mean.

Sanctions should only be lifted when the entire Kim family and Little Rocket Man’s ruling entourage are in a courtroom in The Hague for crimes against humanity.

Kim and his family should simply give themselves up to the UN. Why would they do this?

This will be closely followed by a demand for “food aid” or some other such “humanitarian” assistance.

After we’ve paid (again), they will start the rope-a-dope which will be followed, some years later, by abandonment of the talks and a resumption of the program.

We’ve seen this twice before already from the Norks. It is a textbook implementation of the game plan established by AQ Khan of Pakistan.

Well. Tightening the screws on the Norks seems to be working. The best move is probably for Washington to make some noncommittal noises while turning the screws just a little bit tighter.

he admitted that “the Trump administration would be hard-pressed to reject the North’s proposal without making it appear that Washington — not Pyongyang — was the problem.”

It’s not obvious that a perception that Washington is in the driver’s seat is a disadvantage.

NK just wants time to build a sufficient number of nuclear tipped ICBMs to be a deterrent to the USA and SK. Then they will wage war against SK under the cover of their deterance. Remember how they sank a SK patrol boat. That’s just a sample of what they will do.

This is the J. Wellington Whimpy art of deal making; “I will gladly pay you Tuesday, for a hamburger today”.

DRRK wants to have a face to face negotiation with the US, simply so that they can claim that got the US to the table. Nothing will be agreed to, and if anything is, the DPRK will not abide by its promises. We know this from recent history. The US would be insane to sit down with them.

They’re running out of money and smuggled in parts and the test site needs work.
They’ll work on those, out of sight, while talking a good game. I don’t think Trump will be fooled but the MSM will be all over the “New” Kim and want to give him anything he wants.
Somehow they will overlook the horrible human rights violations, concentration camps, and other things as they did during the first days of the Olympics.

So business as usual then? Yeah. That sounds about right.

The US government pays for the deployment of the US Army in South Korea. I’d just as well have the US Army returned to protect the country and people of the United States.
Bring the troops home.

North Korea wants to talk? So did North Vietnam.