“I dislike Trump, but they could have done without the body shaming” 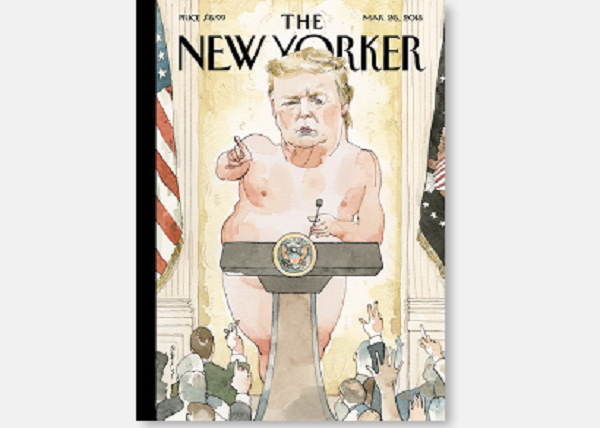 The New Yorker is under fire for its latest cover.  The cover depicts an unflattering image of President Trump, naked, at a podium.

The image is entitled “Exposed” and appears to be a reference to the naked emperor in the Hans Christian Andersen tale “The Emperor’s New Clothes.”

However, it’s being seen as an example of body shaming and has created a social media backlash.

The prestigious New Yorker magazine is under fire for its latest cover, which depicts President Trump addressing reporters in the nude in an unflattering illustration that mocks his appearance.

The magazine tweeted an early look at this image and it was immediately met with criticism. While many critics chimed in with responses calling the image “disgusting” and “repulsive,” others accused the image of mocking the president for his physical appearance – which is generally frowned upon in the current cultural landscape.

An early look at next week's cover, “Exposed,” by Barry Blitt: https://t.co/pfURSeisEU pic.twitter.com/X9ZaxIbEiX

“I dislike Trump, but they could have done without the body shaming,” one user tweeted. “Especially considering that is a culture we are all trying to get away from.”

The reader added, “As someone who is VERY Anti-Trump, displaying him as a flesh colored blob is 100% body shaming.”

“Shame on you for doing this to anybody, not just the president,” a reader replied to the magazine’s tweet. Another reader was so disgusted that they referred to The New Yorker as “trash” that has “fallen to the lowest level,” while another proclaimed, “Your readers are snobs.”

Members of the media have chimed in, as Think Progress editor Judd Legum predicted that Trump won’t appreciate the art and MSNBC producer Kyle Griffin simply tweeted, “Oh my.”

Do they have the guts (or cojones) to present a similar cover featuring Hillary?

I find it amazing how the Left frequently condemns people for various actions, but then has no qualms about doing exactly what they complained about to some conservative. What remains most amazing is how so few in the audience appear cognizant of this blatant hypocrisy.