With this attack, officials want to review 14 other deaths of exiled Russians in Britain. 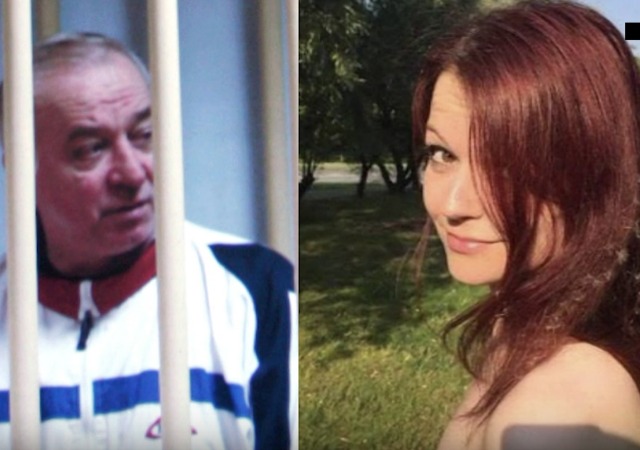 Another ex-Russian spy poisoned in Britain. Authorities announced that a nerve agent poisoned ex-Russian spy Sergei Skripal and his daughter Yulia in Salisbury on Sunday.

Skripal and Yulia were found slumped over on a bench on Sunday. The first police officer on the scene is also in the hospital. Doctors said that all three of them “were suffering from ‘exposure to a nerve agent.'” Detectives believe someone deliberately targeted Skripal and Yulia. Nerve agents include VX and sarin, but we do not have specifics on which nerve agent was used in this case. From the BBC:

“This is being treated as a major incident involving attempted murder, by administration of a nerve agent,” he [Assistant Commissioner Mark Rowley] said.

“Having established that a nerve agent is the cause of the symptoms… I can also confirm that we believe that the two people who became unwell were targeted specifically.”

He said there was no evidence of a widespread health risk to the public.

Russia jailed Skripal in 2006 for 13 years after he was convicted “of passing identities of Russian intelligence agents working undercover to the UK’s Secret Intelligence Service, MI6.

Russia released him on July 10 along with three others in a prisoner exchange with the FBI. You know who was involved in that swap? That red-headed Russian spy Anna Chapman that captured the world with her beauty.

Skripal moved to Salisbury and has been living there for eight years. In the past two years, he has lost his brother and son, described by family members in “mysterious circumstances.”

His death echoes that of the poisoning of ex-Russian spy Alexander Litvinenko. A public inquiry concluded that his poisoning came from approval of Russian President Vladimir Putin. But now with Skripal’s poisoning, MP Yvette Cooper asked Home Secretary Amber Rudd to review 14 cases of deaths in the UK in the past 20 years.

These people fled Russia and found refuge in Britain. The BBC wrote that these deaths “were variously found to have been heart attacks, suicides, accidents, and deaths by natural cases.” But new tests have shown that those original causes of death may not be accurate like in the case of exiled Russian Banker Alexander Perepilichnyy:

Initial toxicology tests on Perepilichnyy’s body revealed nothing suspicious and it was ruled to be a natural death. But two years later, a fresh round of tests arranged by a life insurance company found traces of a rare and deadly plant toxin in Perepilichnyy’s stomach.

Gelsemium, a flowering plant native to China and Southeast Asia, is known as “heartbreak grass”, because its leaves, if swallowed, cause cardiac arrest.

US intelligence sources told the BBC at the time that they believed Perepilichnyy was murdered. An extensive investigation by Buzzfeed News claimed that the businessman was one of at least 14 people US officials suspected were killed in the UK by Russia.

I guess Granny Clinton might want to be grateful that the “Russian Interference” claims are a figment of her and her allies imagination.

It seems “The Russians” have more definitive means to “interfere” if that were true.

First I would suspect Obama, Hillary and the DNC.

Maybe another autopsy is in order for Andrew Breitbart to look for Gelsemium?

Pity we can’t do that with Justice Scalia.

I could believe that Putin would order such deaths. When there are this many, it should raise some red flags.

Speaking of which, why doesn’t the number of unusual and strange deaths that have ties to the Clintons not raise flags?
I can’t say I trust our government with being wholesome either, and with the convenient timing of some notable deaths, and with what we have seen so far with the FBI having been turned into something less than it’s charter with the FISA mess and Hillary being let off, doesn’t it make you at least wonder if those deaths were helped along? It sure seems that the unusual types of deaths, as well as the timeliness of many of them, and the shear number, in the 60’s, would make for some alarm. Even if a person had dealings and relationships with 30 or so deaths like that, they would be looked at suspiciously.

With the Clintons, I go back to all those files Hillary had in the WH, and think of how easy it would be to compromise a lot of people in power with information not known by the public. It sure could explain why they never seem to have any crimes stick to them, and I guarantee that the laws of percentages show there were far too many of them for not one to be real.

Breitbart seemed fishy, mainly due to timing. Scalia seemed fishy due to the whole no autopsy and cremation (which while not disallowed by the Catholic faith, is very rare) and again, the timing with the cases before the SC.

There’s no quitting the KGB. If you turn double agent they’ll not only whack you, they’ll do your whole family. Knife them in the back and then run to the extensive, multinational spy enclave in London? Then the KGB serves up some hot nuclear tea. Or you end up hanging yourself from the phonecord in your very secure private office. Livenko? He knew the score. Who cares if he got what he deserved. He was a turncoat traitor. No one likes traitors, Benedict! He was trafficking in rumor, industrial espionage and stolen personnel files. He was a dirtbag – not a plucky dissident scratching his way out of the gulag.

MI6’s Christopher Steele works the same street. He only changed office space. No one quits MI6. A foreign agent working for Hillary Clinton and the DNC. Trafficking in whatever suits his clients. One can only hope he gets his just desserts.

Exposure to nerve agents is more disturbing than the earlier false reports that it was Fentanyl. It pisses me off that Hostile Nations and various migrant cultures fight their wars in our lands.