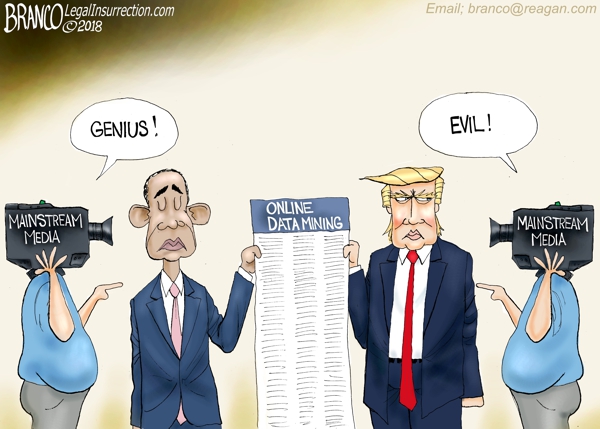 One suspects the hyperventilating we are seeing is exactly as the picture depicts. Its ok when the black baby jesus does it but when the orange one does EXACTLY the same its end of times!

Th picture is not perfect. The Obama campaign found a way to perform privacy violations using the data, did so and kept all the data. All the Trump campaign did was use the Facebook database without stripping it of data about non-consenting “friends.”

Facebook, upon finding out about the abuse by the Obama campaign, allowed it to continue.

There are numerous media reports that claim that the data the Trump organization paid for was hacked, stolen, which is not the case. FB was paid for the information, and it was used to target those who were already leaning toward Trump, or at least Republican candidates. Obama was the golden boy, he can do no wrong because he is Duh One. I find it hilarious that FB lost stock value because they sold to the “wrong” side.

The media is horrendous with the hatred of Trump pushing them to lie and mislead the public. While I believe in the free press, they should also be held accountable when they purposely mislead the public as they are doing with almost everything concerning Trump.

and FB prevents conservatives and libertarian thoughts being posted.

Why does the media insist on demonstrating their biases every day?

What ever happened to nuance or subtlety? What are they teaching these clowns in journalism “school?”

Better for them to display their biases than to successfully conceal them.

The difference is that Cambridge Analytica harvested the data under false pretenses, saying it was for academic purposes and that individual information would be stripped.

BobM: so that means using data for politics is all evil and stuff?

Narrator: both sides did exactly the same thing, and lied about it the same way, but Zach follows the old maxim of Democrats: “it’s not a lie when we do it.”

SDN: both sides did exactly the same thing

No. They didn’t do the same thing.

The Obama campaign told people what they were sharing and for what purpose. On the other hand, Cambridge Analytica obtained their data fraudulently.

Yeah, trump campaign didn’t lie, they just got the data second hand whereas Obama and Clinton got the data first hand.

Facebook makes it’s money off of selling that data – wether to help sell breakfast cereal or a political candidate, that’s what they DO.

To put the Cherry on the top of this made up shitstorm, there’s no real evidence that this was an effective use of campaign advertising dollars – just the NEED to explain away how The Perfect Candidate Who Could Not Lose lost anyway.

It was the Russians hacking the vote machines (never happened), it was the Russians advertising on Facebook (spent 0.1% of what Hillary,s campaign spent, much of it post-election, what effective geniuses guys!), it was weak-minded white woman obeying the mind-control powers of their husbands/boyfriends/dads/sons (where can I get me sum of that ability lol), and now it was profiles from Facebook which evily allowed Trump to advertise his brand -but was not evil when Obama and Hillary did it……

Look, Trump was the candidate Hillary WANTED to run against, so she’d win bigly.

Goddess forbid that Hillary lost because she comes across as unlikable, she spends a lot of time, effort, and money insulting voters, she has baggage like corruption issues and enabling sexual harassment and assault issues, many didn’t think she was all that good in her previous jobs, she has a reputation for treating underlings badly, or any of that.

Goddess forbid that Hillary lost because she didn’t think a loss was possible so she ran a complacent campaign, didn’t bother to actually try in a bunch of states she thought she wouldn’t need, and instead campaigned heavily in states that actually were in the tank for her to run up her “popular vote” totals – forgetting that the popular vote isn’t how this works….

Bad candidate, bad campaign, opponent who discombobulated candidate and her allies by refusing to play by the old standard play book, nope, that couldn’t be it……

Yup -MUST be all those other (made up) reasons, and the alt-right and the KKK and the neo-Nazis (non of which, btw, would individually fill up any sizable sports stadium – feel their (imaginary) powahhhhhh!).

Is that so? Ok, then explain to me why the “dodgy data” is ok for democrats to access and not for Trump campaign to access?

Perhaps bannon thought (correctly?) that zuckerbergs company would have a political double standard as to when and who can use the profile data they make a living off of selling to third parties. And if you try to tell me that Facebook doesn’t have a political tilt to their policies, I’ll nicely ask you to pull the other finger as my response.

Also – “dodgy” as in incorrect, or “dodgy” as in zuckerberg was tricked into being even-handed in providing access to the data he vacuums from his customers/prey. The second, I think. If that’s a crime in the US, by all means prosecute it and have bannon pay the fine or whatever. I recall someone on NPR claiming it’s a crime under EU law, if so prosecute it there. And by all means have Brannon’s company reimburse zuckerberg – at the same rates they charged Obama and Hillary for that type of data.

None of which actually makes Trump or anyone else besides bannon in the campaign guilty of criminal action or intent, btw. Hell, not even sure if bannon faces prosecution, although I’m sure the Dems will have no problem finding a prosecutor willing to attempt it, regardless of wether the law actually covers this territory. Lord knows they’ve managed to stretch an investigation into supposed Russia-Trump “collusion” to cover everything else when collusion itself failed to crystallize out of their super-saturated solution of conspiracy theories.

This is all a bunch of hooey, in any case. The Facebook users whose profile data was used were those of possible Trump supporters. The folks most outraged are hardly that, their data wouldn’t have filtered out as useful but would have instead been discarded. Unless some ads were targeted to Bernie supporters, in which case Hillary has only herself to blame if stealing the presidential primary hurt her in the actual presidential race, IMHO.

BobM: Ok, then explain to me why the “dodgy data” is ok for democrats to access and not for Trump campaign to access?

The Obama campaign told people what they were sharing and for what purpose. Cambridge Analytica obtained their data fraudulently.

The media also continues to call the Cambridge operation a “hack” and a “breach,” even though FB’s first comments about the operation it denied these claims. Only now that Z has seen which way the wind is blowing is he playing the game that something untoward was done. He doesn’t want to be seen as “stepping out of line,” because we know what happens to liberals who do that.

DaveGinOly: The media also continues to call the Cambridge operation a “hack” and a “breach,” even though FB’s first comments about the operation it denied these claims.

It wasn’t a hack, but a fraud.

The Obama campaign didn’t collect the data, Facebook did, didn’t they? Which means at the time the data was collected, it was certainly not upto the users/prey as to what would be done with it. Perhaps you mean to say that Obama was open (bragged, actually) about their usage?

In any case, still waiting for a good response as to why using Facebook data to sell breakfast cereal or sell Obama is gooood, whereas fire and Trump baaaaad.

BobM: The Obama campaign didn’t collect the data, Facebook did, didn’t they? Which means at the time the data was collected, it was certainly not upto the users/prey as to what would be done with it.

Users agreed to terms of service for joining Facebook. When the Obama campaign asked users for data, they described both the type of data and the purpose to which the data would be used. Cambridge Analytica obtained their data fraudulently.

“When the Obama campaign asked users for data” – you ignore that there’s a middle man. The Obama (and Clinton) campaign never did any such thing, they asked Facebook for the data, they didn’t post their own website online and collect the data themselves directly from users/prey.

If you keep saying such a basic mistake repeatedly, you sound like you’re repeating a Talking Point rather than demonstrating understanding of what actually went on.

BobM: The Obama (and Clinton) campaign never did any such thing, they asked Facebook for the data

In 2012, the Obama campaign asked users to download an app, explicitly stating what information they would download.

Didn’t know that, but that’s not all they did apparently.

According to these quotes, Facebook employees admit that Obama also did the exact same type of “nefarious” data mining that CA did, and in a larger scale to boot. But since they supported the Obama campaign – THEN it was okay to data mine without user permission.

BobM: Facebook employees admit that Obama also did the exact same type of “nefarious” data mining that CA did, and in a larger scale to boot.

The Obama campaign did data-mine. The difference is that they informed users who signed up that they were doing so, and for what purpose.

And Cambridge analytica should be spanked, as far as punishment for whatever law they broke goes, although I’ve yet to hear any non-vague explanation of what the actual law and penalties are. Apparently I have to repeat myself on this several times to get across that in so far as any law was broken, prosecute the person responsible. (Which, btw, doesn’t appear to be Trump).

But this is an election and politics, not a jury trial – there is NO “fruit of a poisoned tree” take-back on real world results. If there was, Romney should have had a do-over after Harry Reid poisoned that election by lying about Romney not paying his taxes. Upon being asked after it proved after the election to be a bald faced lie, Reid’s response was a brazen “Well, it won us the election, right?”.

Despite the convoluted attempt here to again justify overturning election results you didn’t like By Any Means Necessary, you are trying to charge Trump of defrauding the electorate by Illegal Advertising, a political “crime” never before dreamed of in the law.

People have personal data on FB and they seriously believe it should be, is, or can be made secure? Why did they put their personal data not just on the flipping INTERNET, but on FB, the ultimate connectivity platform, if they wanted it to be secure?

These are the same people who are SHOCKED when their nude pictures fall out of the “cloud” into everyone’s computer.

We had someone at work post a pic on their FB page that read…”I’m playing pool with my boyfriend, my boss thinks I’m making a sales call, lol”

Problem was…the boss saw it…she was SHOCKED when she was fired!!

I’ve been warning people about Facebook’s creepy data collection for years, yet only when Trump is in office do people seem to give a crap. Appearently the dems are the “good guys” smh