Leave the Kindergarteners out of this 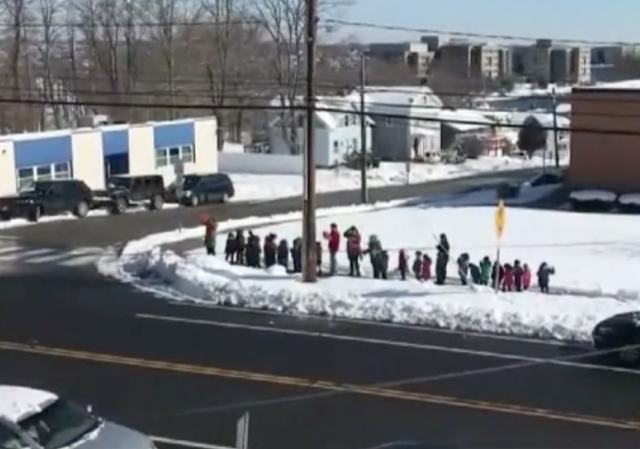 There are many reasons my parent brain keeps me up at night, one of which is that public schools seem hellbent on destroying the innocence of childhood far earlier than necessary and often without parental consent.

There, a class of kindergarteners was taken outside for a “school safety” protest on the same day teenagers across the country walked out of their high school classrooms to protest guns.

The five-year-olds stood on the sidewalk next to traffic chanting “we love school” while their teachers held signs and explained that 17 angels were looking down from heaven, 17, of course, is symbolic of the 17 people murdered at the Parkland school shooting last month.

At five, kids don’t need to learn how to protest. There is plenty of time for first amendment activities later on in life, all of which they’ll learn soon enough.

But Harbor Elementary isn’t the only school to broach the subject of guns and school shootings or even the blanket topic of school safety with their smallest students.

The Wall Street Journal reported several elementary schools across the country were engaging in similar activities. Most, of course, were progressive-leaning schools:

Some of the most organized events are at schools with progressive traditions and parent bodies. At Manhattan Country School, a private school with a social justice mission in New York City, children in prekindergarten through fourth grade will sing the peace songs “If I Had a Hammer” and “Paz y Libertad.”

And at PS1 Pluralistic School in Santa Monica, Calif., elementary students wrote their wishes for a safer world on small pieces of rice paper, to be hung from a large piece of driftwood in a schoolwide ceremony. Children said they wished for houses for the homeless, kindness, an end to drought and more wishes. Although teachers didn’t mention anything about firearms, they were on at least one boy’s mind.

“I wish there were no guns so people couldn’t suffer,” said 8-year-old Gabriel Chibane. “It doesn’t make sense. Why shouldn’t they have a longer life instead of just a short life?”

In Utah, leaders of the statewide parent-teacher association are embracing a social-media campaign called #WhatsYour17. It encourages positive actions tied to the number of victims killed in Parkland.

“We’ve talked about reaching out and smiling at 17 new people or finding 17 new friends,” said Jeana Stockdale, president of the Utah PTA. “In elementary school, it could be asking someone new to play with you.” Each district can decide if and how to mark the day.

Deciding what to do is especially tricky at schools that include students with different stages of awareness. At the Ridgewood Avenue School in Glen Ridge, N.J., which serves third through sixth grades, Nicole Quinn, president of the Home & School Association that represents parents, said the debate is “coming down to an argument about when it’s appropriate to ruin our students’ innocence.”

Which is exactly the argument to be had here — when and who decides when childhood innocence is over?

Kindergarteners (for the most part) still live in a world of wonderment and makebelieve where Santa is always watching, a stick is the ultimate multifunctional tool that transforms into a sword, a magic wand, a crutch, and anything else required. Dad and Mom are still capable of making everything better and playing in the yard sprinklers is the highlight of the week.

There is absolutely no reason to pop the childhood bubble in kindergarten or even first grade. There is a proper time to introduce our children to darker, uncomfortable realities (when we have the luxury of doing so) and when that happens, these issues ought to be discussed under parental guidance, not instigated or skewed by a teacher.

Having your children in MOST government monopoly schools is a form of child abuse. See the period?

More evidence that public schools are indoctrination centers, not places to educate children.

How very Marxist, how very fascist…… Is the battle for our children’s minds lost?

Watch, read, and then you decide.

Think about it, so called public school ‘educators’ (while getting paid with our taxes) are using school hours, using our children as useful idiots to further their leftist ideology and to indoctrinate our children give up their rights.
These ‘educators’ MUST be identified and FIRED

Yep, they are going to change the world, one diaper at a time.

Makes the wife and I contemplate home school more and more everyday. That’s still legal, right? I know in some countries it is not.

I would have had my children home schooled if they were of that age today. As it was, I had long talks with them about their education and filled in many blanks in their history lessons. I had them read books to give them more knowledge of the history they were being taught, as so much was glossed over and reshaped to promote ideology rather than history.

I don’t trust the schools today, as they are indoctrination centers more than they are places of education.

It’s legal, but regulations vary by state. For your state’s level of regulation, check out the HSLDA website: https://hslda.org/laws/

For the best source of homeschooling information, try the Well-Trained Mind Forums: http://forums.welltrainedmind.com/index.php?app=core&module=search&do=viewNewContent&search_app=forums

School was such a safe haven for me growing up, as was libraries.

I do not know this world..

It’s insane that our children are being run over in the streets. Our only sane answer is to uphold the law against these crazy people.

How is this any different?

Of course, today an armed school resource shot and killed a school shooter, who was stopped after shooting only two other students, both of whom are expected to survive. Doesn’t fit into the narrative, of course, but far better, I think for the kids, to have armed resource officers (willing to do their jobs) than using them as props to achieve the progressive dream of disarming everyone except government employees and vicious criminals.

The Progressive Fascists want school shootings because every dead child is a new opportunity for them to violate our civil rights by banning arms. Why else would they be against the only thing that would protect our children, armed men at schools?

I believe one of the greatest evils is to foster very adult problems onto to the young and innocent who have little capability of comprehending them.

They don’t want them ‘understanding them’ as kids or adults. In the “ Who is a communist. One who has read Marx. Who is an anti-communist? One who understands Marx.” Manner.

American adults have gone insane. The hubris. The conceit. The narcissism.

Adults don’t make up pet names for the President of the United States.

Are you going to be a potty mouth again?

Sure adults do, you poor idiot. Post the time you objected to me referring to “Barracula” or “Hellary”.

JustasHappy – I believe one of the greatest evils is to foster very adult problems onto to the young and innocent who have little capability of comprehending them.

I wonder what sort of conversations might have taken place between these children and their parents, if any, about the day’s event.

I was 5 years old when president kennedy got shot. At 5, I couldnt comprehend why the 3 stooges or the saturday morning cartoons werent on TV.

The term is “Weaponized Empathy” and it’s one of the left’s most effective tools. It’s also pure evil.

These teachers should be fired immediately and ridden out of town on a rail for taking these small children out into sub-freezing temperatures to stand beside a busy roadway where a car could skid out of control and wipe them all out for this silliness. These teachers care nothing for the children placed in their charge. Fire them, strip them of their teaching certificates and charge them with child abuse.

“The governments of the great States have two instruments for keeping the people dependent, in fear and obedience: a coarser, the army; and a more refined, the school.”
Friedrich Nietzsche (1844-1900)
Source: The Complete Works of Frederick Nietzsche, 152 (O. Levy Ed. 1974)

Wow, those kindergartners are amazingly woke! It’s like they’re as politically aware as adults!

TAKE. BACK. OUR. SCHOOLS.

Misuse of school power to make kids this age engage in political activism is child abuse.

These scum leftists will use anybody and anything. Disgusting.

If this is true … what the teachers and school did was wrong and they should be punished for it.

We don’t know the worst about protest abuse because parents are not speaking out. Our elementary handles it horribly, but I’m not going to do anything that will damage my children — unless they do it again.