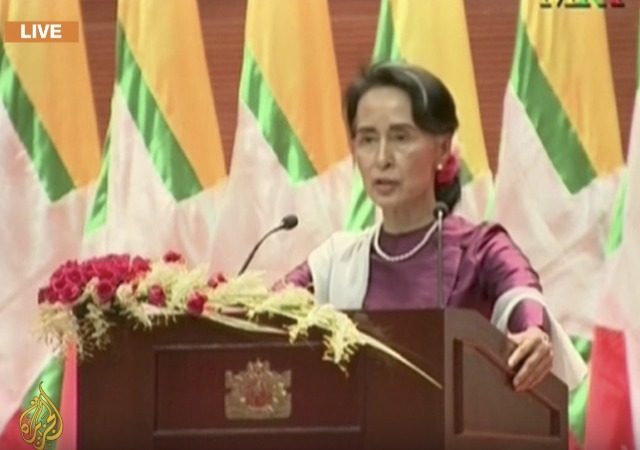 As her country continues to batter the Rohingya minority, Myanmar leader Aung San Suu Kyi, once considered a shining light when it comes to human rights, has faced criticism for basically turning a blind eye.

Now the Nobel Peace Prize winner has lost the prestigious human rights award she received from the U.S. Holocaust Museum:

As a living memorial to the Holocaust, the Museum’s mission is to inspire citizens and leaders worldwide to confront hatred, prevent genocide, and promote human dignity. Preventing genocide is at the core of our work every day. Based on inspiration that you created for millions around the world, with your long resistance to military dictatorship, and your advocacy for freedom and human rights for all the people of Myanmar, we were honored to present you with the first Elie Wiesel Award in 2012. It is with great regret that we are now rescinding that award. We did not take this decision lightly.

In recent years, the Museum has been closely monitoring the military’s campaign against the Rohingya and your response to it. In November 2013, we held a public event at the Museum to call attention to our growing concerns, titled: “Our Walls Bear Witness: The Plight of Burma’s Rohingya.” Since that time, we have undertaken numerous visits to Myanmar and Bangladesh to obtain firsthand evidence so that we can fully understand the extent of the persecution and crimes committed, as well as the motivations and actions of all the responsible parties.

In May 2015, we published “They Want Us All to Go Away,” which documented the early warning signs of genocide. Last November, we released detailed findings based on research on the ground documenting crimes against humanity, ethnic cleansing, and what we termed “mounting evidence of genocide” committed by the Myanmar military against Rohingya civilians since October 2016. Regrettably over the last five years the situation has become progressively worse and today seems untenable for the Rohingya population.

The museum said it hoped that she would have stood up for the Rohingya, who have faced oppression in Myanmar for so long, and done something to stop the genocide. But she didn’t. The museum noted that the government has refused to work with the United Nations and “cracked down on journalists trying to uncover the scope of the crimes in Rakhine State.”

The museum also would not accept any excuse she has for taking a backseat:

We understand the difficult situation you must face in confronting decades of military misrule and violence in your country and that institution’s still powerful constitutional role. However, the military’s orchestration of the crimes against Rohingya and the severity of the atrocities in recent months demand that you use your moral authority to address this situation. While Myanmar has taken important first steps on the road to democracy, any transition that does not protect the country’s most vulnerable communities will be deeply flawed.