Witness: man “shouted Allahu Akbar as he burst into store.” 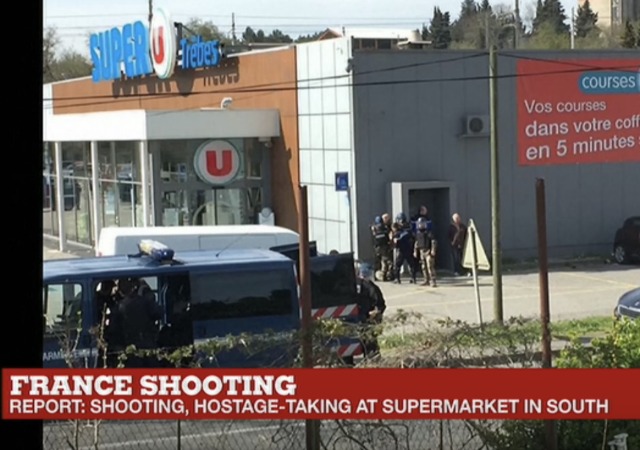 A gunman, who swore allegiance to ISIS, took hostages at a French supermarket in Trèbes and killed at least two people there. Before that, he murdered a motorist and stole his car.

At 2:50PM local time, reports say that the police have shot the attacker to death.

French police have confirmed that two people have been killed and about a dozen wounded in the supermarket hostage-taking.

However, the casualty toll is likely to rise, the regional head of the gendarmes said. “We are unfortunately expecting to find more victims,” he told Sud-Ouest newspaper.

A spokesman with the national police service said that it is unclear whether there are still hostages inside the store. The spokesman said a police operation to apprehend the assailant is still under way.

The gunman has demanded French authorities release Salah Abdeslam, a surviving member of an ISIS cell that attacked Paris in November 2015. He and others killed 130 people. The attacker is of Moroccan national and the French intelligence agency had prior knowledge of him.

The Associated Press has reported that the man wounded at least a dozen people and that “a police operation to apprehend the assailant is still underway.”

Before the hostage situation, someone shot a jogging police officer in Carcassone, which is about 15 minutes from Trèbes. Police said they found the car used in that attack at the supermarket.

They are going to have to pass some gun control laws over there in France.
Oh, wait!

France is a good come back to all those glorifying Australia’s gun bans….France has “stronger” gun laws and they have more “mass killings” than USA. That said, the USA is on the same road to more dhimmi related shootingd.

I guess more gun control must be the answer!

You reap what you sow. The obvious question: what the hell did they expect?? Britain will be next, you watch. No go zones were just the beginning.

Please, sir, I want some more!

Seems to be terrorism? So they’re still baffled by his motives.

Wait just one minute! Everybody knows that yelling Allahu Akbar is how the Amish get away with their violence. Sure you see them on the road with those horse drawn buggies, but in their barns they have fast cars and hot women. The kind who are attracted to bad men. Muslims are just like Baptists. They just want to go fishing and drink cold beer.

God damn Mormons at it again!!!